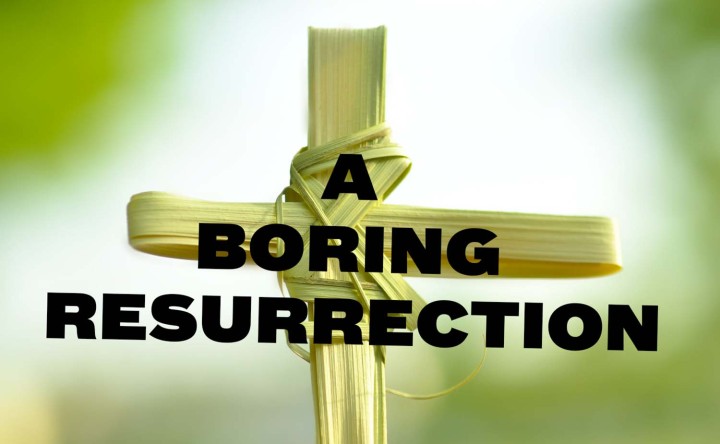 Some resurrections are worth caring about more than others. This is the story of one of the less interesting ones.

The Passion of the Christ began the season, dominating the box office over forty days and forty nights. On Easter weekend of that year — at the end of Lent — The Passion felt a nice surge in attendance, bumping it over Hellboy and back into the number-one position. Hellboy’s familiar shade of blood-hardened red would surely make it back into movieplexes someday, we thought, perhaps even in the form of another superhero.

And it did: this year’s Lent began with Deadpool, recalling The Passion’s shocking February numbers with a $132-million opening-weekend record. As the weeks grew and fasted, Deadpool ran a course similar to The Passion’s, displaying healthy legs for a blockbuster of its size and making us wonder if it would eventually overtake The Passion’s $370-million total haul. It’s out there somewhere, right now, paused at around $345 million, unsure of the right path through its final days. It might need more than itself to reach the light it seeks.

We just picked palms from the basket at Sunday mass, anticipating the free posters of Batman v Superman: Dawn of Justice that we grabbed from the movie theater’s red Formica countertops that same afternoon. We hadn’t stopped home after church, so we carried them there together, the palms and the mini-posters. We wished the gospel had been shorter, just like we wished the Dawn of Justice posters were actually for Captain America: Civil War. In our minds they changed form and revealed themselves to us, curtained with fuzzy white light, like a transformation of water into white wine.

When Zootopia was over, we took the palms but carelessly left the posters beneath our seats. They were already maps of our disinterest, left there to gather gummies and piss from future moviegoers. With box-office miracles like Deadpool and Zootopia falling straight from Heaven into our MoviePass viewing histories, we knew we had to sacrifice something. After all, this was Lent. The sacrifice didn’t end there.

Another Sunday: the morning is cold and bright. The cold, at least, cannot last. The winds are springlike and carry the sands of summer on them, each individual grain belonging to Deadpool’s province, yet lifted and dispersed in joyful shapes that want to test and pry at its boundaries. In these winds, Miracles from Heaven and Heaven Is for Real make their way up the hill, carrying spices, following the narrow path to the grave site. Occasionally one or the other trips, seeing that the path is worn; they take comfort in knowing of the deaths that have come before them and those to come, with mourners of their own. They have never felt more self-possessed, but their mission demands selflessness. Today is the third day since Allegiant was placed in the tomb, and they are here to ensure its proper burial.

Miracles from Heaven was released on March 16th, getting a two-day head start on the weekend’s more notable wide release: Allegiant, the third installment in the Divergent franchise. With a $100-million-plus budget and franchise maintenance in mind, Allegiant bore a considerable weight of expectation. Its studio, Lionsgate, had sent the once-lucrative Hunger Games franchise back to Heaven last fall, and we felt that Allegiant’s opening weekend would now prove whether the genre of young-adult sci-fi was financially and culturally stable.

Miracles from Heaven faced a lesser burden, produced modestly and branded in line with God’s Not Dead and Heaven Is for Real, two Christian-themed hits from Easters past. What could it do but walk into the modest light that had been cast for it? It banked $14.8 million of God’s money in its first weekend, compared against a $13-million budget. Hands clasped, it watched in silent prayer while Allegiant crumbled with an opening of $29 million, down from the first Divergent film’s $54.6 million. Allegiant had entered the province of Deadpool and Zootopia, and it was clear to all that it had been dragged into some mysterious court and found guilty. But how long would its sentence be?

Pacing closer to the tomb, Miracles from Heaven remembers Friday’s crucifixion: Allegiant, of course, along with Knight of Cups and Gods of Egypt. Each had its vocal defenders. Each might have been a Believer, a box-office smash, in another time and place. As it reaches the familiar crest of the hill, it blinks, its body and spirit splitting for one single moment, and gasps. The rock covering the entrance to Allegiant’s tomb has been moved! — an impossible task for three strong movies, let alone three or four. It looks over to Heaven Is for Real, each of them with a tear in their eye, knowing, their hair dancing in the wind. A light is breaking over them.

The next Divergent movie is titled Ascendant for this very reason. Just like God’s Not Dead 2, or miracles, we might never see a single Divergent movie. But that doesn’t mean they don’t exist. Like many things, the only way for us to know them is for them to continue along their path beside ours, quiet and parallel.