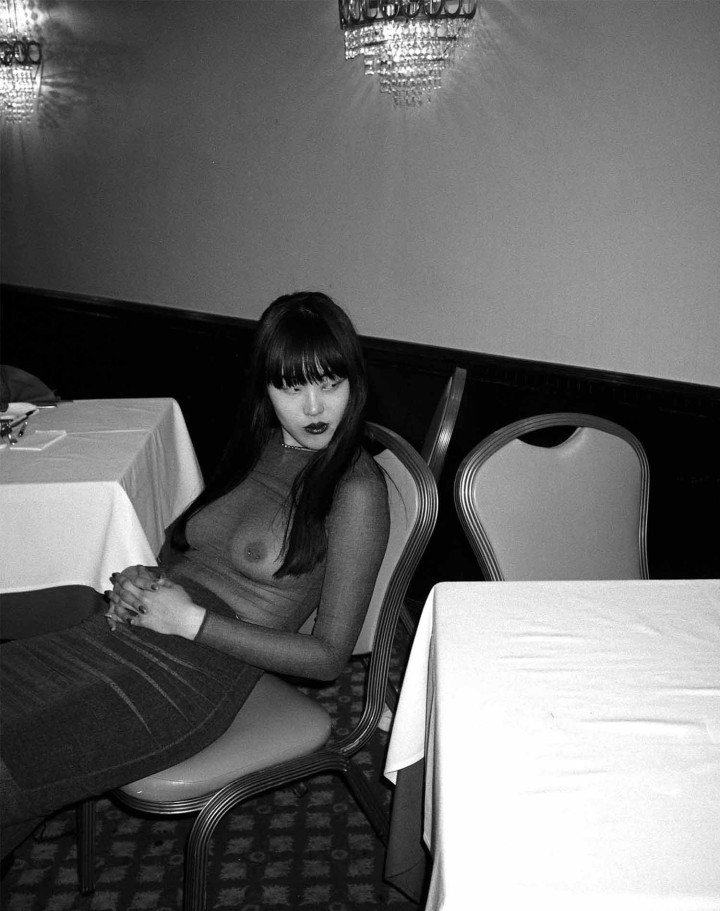 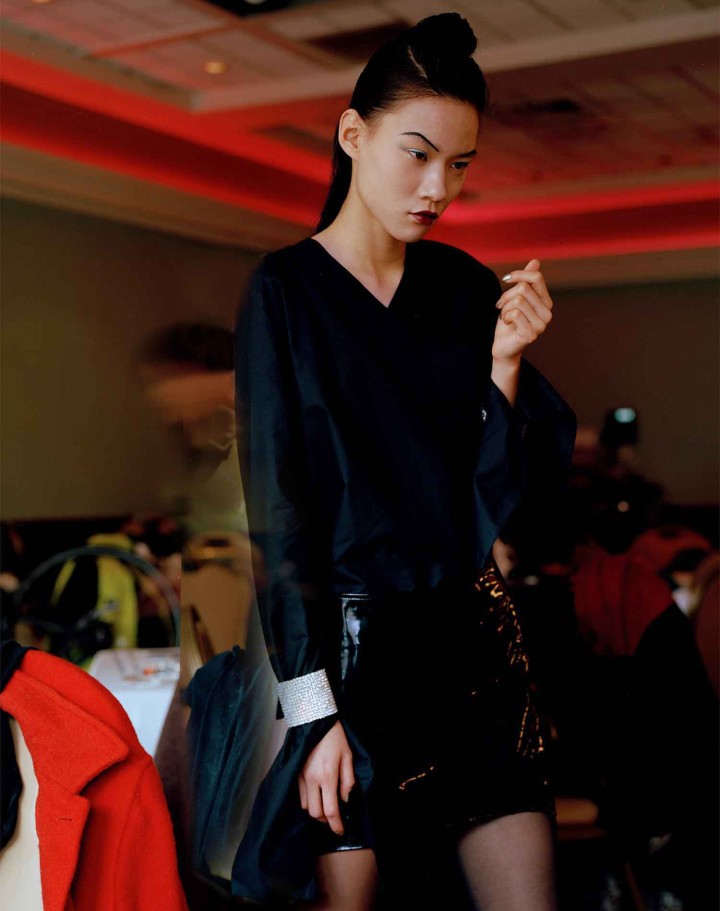 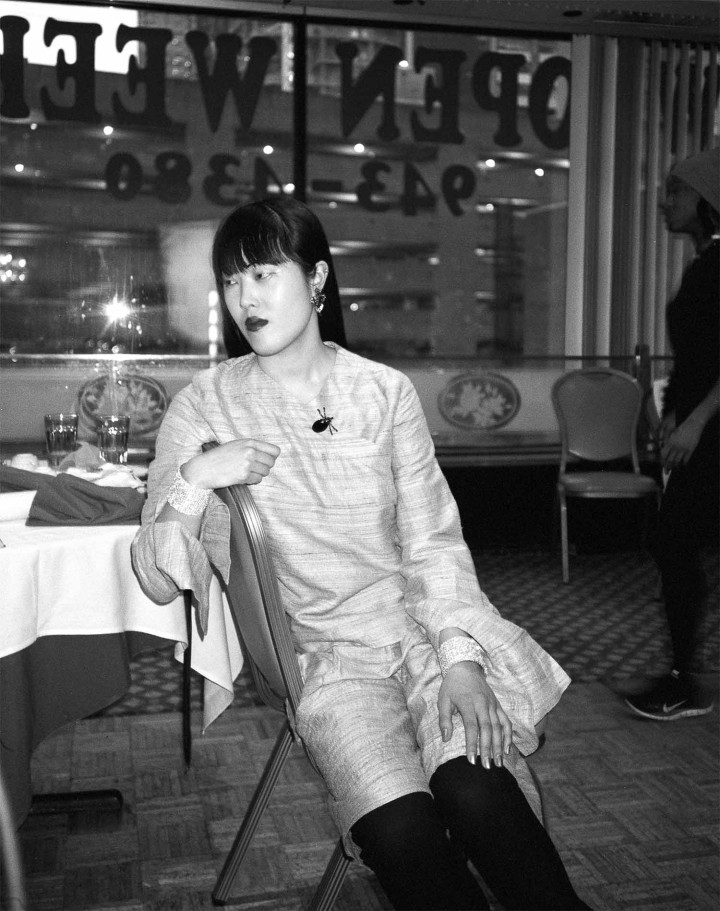 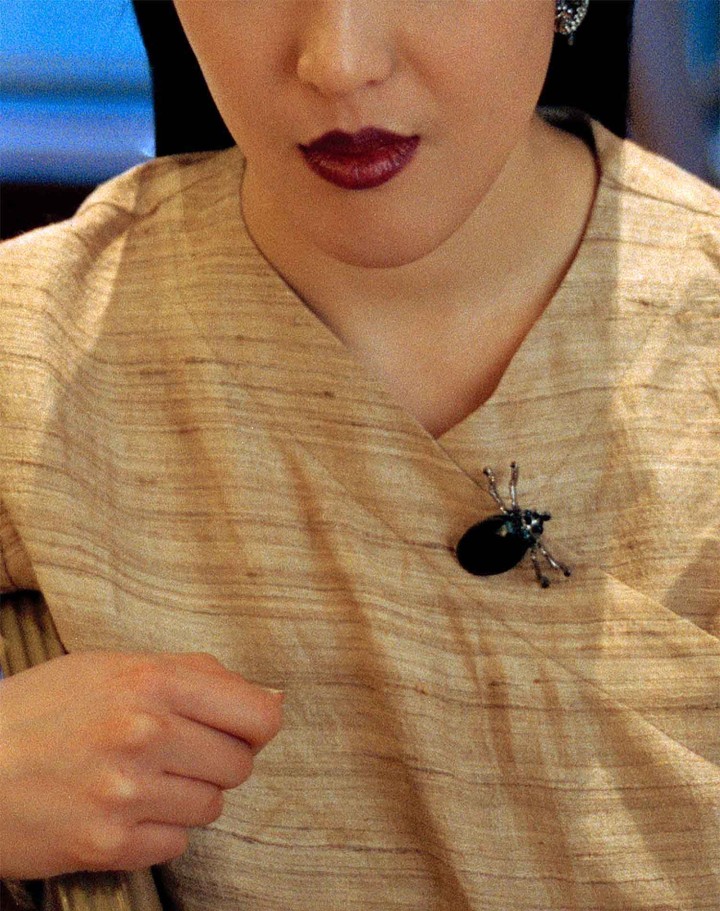 Nhu Duong is an independent fashion designer based in Berlin. Born in Ho Chi Minh City in Vietnam, Duong immigrated at the age of seven to Sweden, where she grew up. Her eponymous designs are classical and operative, yet they are created in a process of both material and social experimentation that includes a growing number of artists as collaborators.

Duong’s recent collection, “Knots,” is comprised of denim textiles, laminated wool, terry cotton, and raw silk. Ribbons, knots and straps open and close the garments, and their parts are interchangeable, creating a kind utilitarian elegance that’s become the MO of Duong’s distinct internationalism. The collection is presented with a series of images made with the artist Marie Angeletti. Its moody confidence is convincing.

What’s this symbol you’re working with that accompanies your new collection?

That’s a deconstruction of a symbol. It’s a knot with hands.

What kind of knot?

It’s the simplest knot that can’t be untied without cutting.

The hands are inspired by the kinds of care instructions that come with technical fabric. It’s like a fictional function rather than an actual symbol.

On your sweatshirts the brand name is rendered almost like a captcha.

It could be seen like a captcha, but I don’t see it like that. But it definitely plays with borders of illegibility, which is of course paradoxical in the context of a logo.

How much do graphic elements play a role in your work?

It depends on the collection and the process. Sometimes I feel like I need some elements to inform an idea, but it’s different with each collection. The new collection I’m doing with Karl [Holmqvist] is about using his language pieces. This will be the most graphic design I’ve worked with, as words are more concrete than patterns or symbols.

Is working with artists a way of introducing something irrational into your clothes?

There’s definitely a degree of experimentation. There’s a perceived need for collections to be about something. Working with artists enables me to create something else that can be very abstract but at the same time meaningful. And it can be exhausting to design collections. Sometimes I just want to do that jacket, and see what happens. It’s liberating to do one piece as a collaboration.

What’s the difference between a product and fashion?

The fascinating thing is that fashion is a product and an idea in one. It should be wearable, but at the same time it should question this function, trying to push against its limits, whether these are physical, technical or even social limits. Fashion always seeks out the functional edges.

How do you view the different contexts that your clothes are part of — from New Theater in Berlin to an exhibition in a particle research lab in Canada?

I’ve started to embrace and actually enjoy the way different people wear or even misuse my clothes. I like changing context. Often the clothes and branding in fashion can overshadow the person wearing it.

What about the titles of your collections: “Compression,” “Interference,” “Displace,” etc. They’re about transforming. What is this communicating?

With most collections the starting point is some kind of technique or craft that I am interested in at the moment, and I push it towards the point of abstraction. The words, such as “compression” or “displace,” directly relate to the material of the clothes, but at the same time they open up a psychological element.

Can you talk about this materiality? You play a lot between the natural and artificial.

Since I was a child I was drawn to shiny materials and objects. I didn’t make the distinction of real or fake, kitsch or expensive. This probably has to do with my Vietnamese heritage where, for example, plastic flowers are often more popular than real ones. I think the distinction between what is real and what is not is quite a Western concept, and I’m interested more in what materials can do rather than what they are or mean.

There is a performative thread throughout your work — especially in the images you produce.

I again work with artists on all of my images. I worked with Heji [Shin], Calla [Henkel] and Max [Pitegoff], and now Marie [Angeletti]. I don’t like to work with other people’s images. I hate doing mood boards. I don’t sketch that much — if you do a sketch, you feel like you need to follow it. I like to keep the process open, and that’s my way of sketching — creating images with these artists.

How do you design without sketching?

I do sketch because I have to communicate with the people I work with. But I actually often experiment directly on my own body. My process is draping.

I’m interested in how this nearness and intimacy works within the system. What do you think about the industry’s efficiency?

I think it’s become very clear that fashion is a global luxury industry in which creative minds have collapsed under the pressure. It demands an efficiency that can be counterproductive to creative output.

Are there advantages to this system?

At the same time I feel that the global economy allows me, as an independent designer, to do things that were not possible years ago — reaching a global audience and allowing me to experiment with different methods of producing, presenting and distributing.