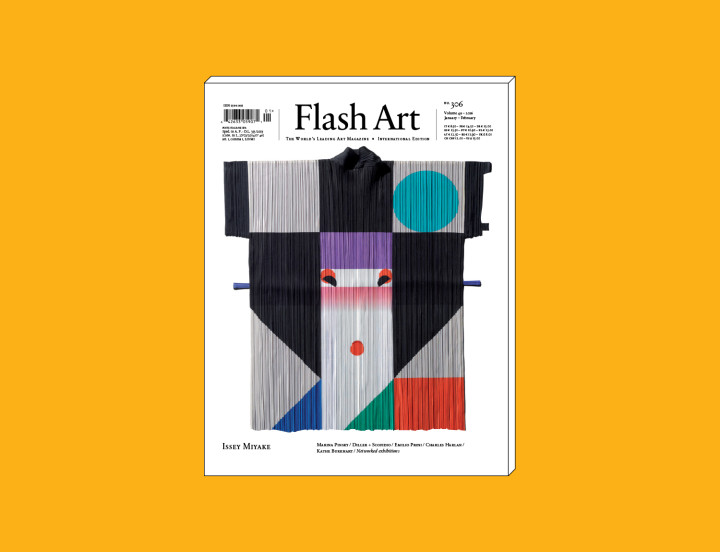 We are pleased to announce that the January–February 2016 issue of Flash Art International is out now. This issue introduces Emily Segal as our newly appointed Editor-at-Large and Cyril Duval as Special Projects Coordinator.

This issue’s cover story is dedicated to Japanese fashion designer Issey Miyake, on the occasion of what will be the most comprehensive survey of the designer’s work to date, scheduled to open in March at the National Art Center in Tokyo. Melding past and future, Miyake’s clothes are unique manifestations of a technology-driven understanding of the sartorial tradition. As Segal writes in her featured essay: “Miyake’s designs channel timelessness in their aesthetic vision and in the randomness of their material inflection. They capture the spirit of the uniform—the desire for an eternal fashion—without enforcing it literally. Or at the expense of bodily reality.”

Like many other “creations” included in this issue—from Marina Pinsky’s sculpted landscapes, to Diller + Scofidio’s earliest interventions in eroding architecture’s disciplinary borders, to Emilio Prini’s revisions of his own past works—Miyake’s protean approach to design introduces a mode of creativity freed from the grip of tradition/innovation or process/product paradigms.

Sebastian Black discusses Marina Pinsky‘s architectural landscapes engraved on ceramics tablets, the artist’s most recent works. “Pinsky’s landscapes, sculpted from land and representing the first land that in some sense became a symbolic representation of land, that is to say landscape, seem to produce an even more vertiginous effect vis-à-vis the gap between real and pictorial space than that of her photographs.”
— Sebastian Black

Since his earliest contributions to Arte Povera, Emilio Prini has refined an art practice sometimes described as “ungraspable,” “deceptive” and “cryptic.” It is a practice that isolates the act of “art making” from those of creating and producing, thus demanding art’s true potential as a critical tool outside the constraints of capitalism. Luca Lo Pinto, Pierre Bal Blanc and Alfredo Aceto survey Prini’s production, delving into the ideas that characterize his oeuvre, namely those of nonproductivity, standardization and void.

Carol Bove talks with Charles Harlan about the artist’s “Tree” series and ecosystems that inform his work.

“The tree pieces I’ve been making recently are literal recontextualizations of objects I found in the street. Seeing them around New York is just as powerful to me as seeing them on a gallery wall, and that’s a feeling I want to re-create with my work—a confusion between a useful object and an art object.”
— Charles Harlan

Started in 1982, Kathe Burkhart‘s ongoing “Liz Taylor Series” has opened unprecedented perspectives in painting, appropriation and feminism. By inserting autobiographical elements—the actress she persistently depicts is an avatar of herself—Burkhart intertwines individual and collective concerns, merges political and personal obsessions and blends a critique of the media with self-portraiture. A portfolio of the artist’s paintings introduces the viewer to the works of this still underrepresented artist.

Orit Gat digs into the current wave of exhibitions about computers, the internet, and data—what she terms “networked exhibitions.”

“What was always at stake in the presentation of new media was differing levels of familiarity with technology among the audience members. That is no longer the issue, but now approaches diverge in relation to the values and effect of these media. Especially when it comes to the internet.”
— Orit Gat

Coinciding with the opening of Diller Scofidio + Renfro’s new building for the Berkeley Museum of Art and Pacific Film Archive, this issue’s “Time Machine” revisits Kyong Park’s conversation with Elizabeth Diller and Ricardo Scofidio, which first appeared in issue 188 of Flash Art in 1996. At the time, Diller + Scofidio were known for a conceptual and critical approach to architecture, and perhaps above all for not making buildings. Now several high-profile cultural institutions bear the DS+R imprint, suggesting that much has changed for the celebrated design studio.

We are pleased to announce Flash Art‘s participation in the third edition of Paramount Ranch in Los Angeles (January 30–31) and the 2016 edition of the LA Art Book Fair at the Geffen Contemporary at MOCA, Los Angeles (February 12–14).