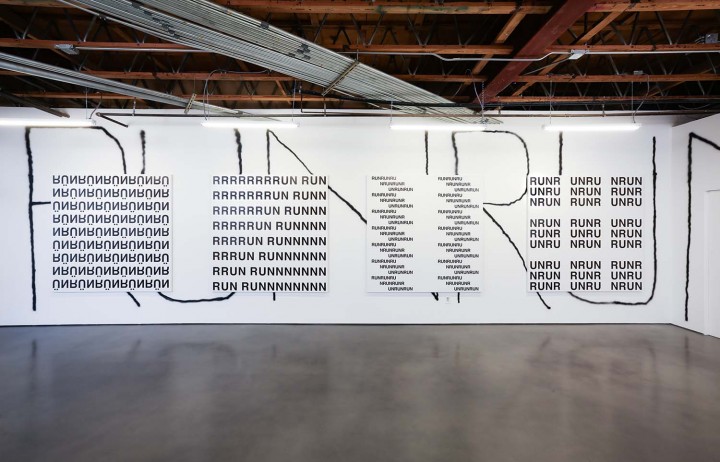 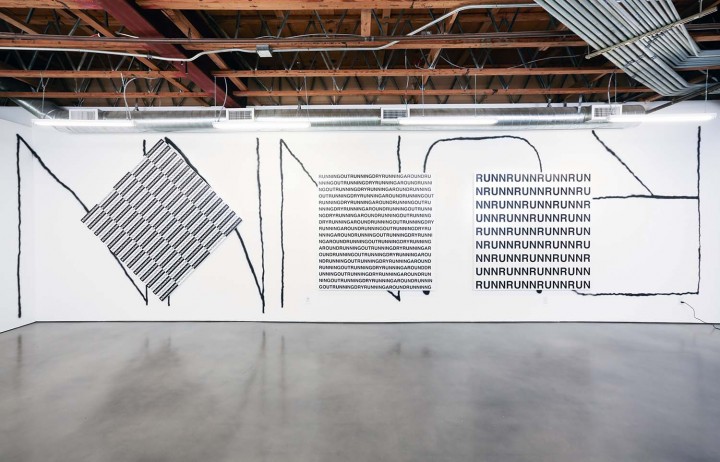 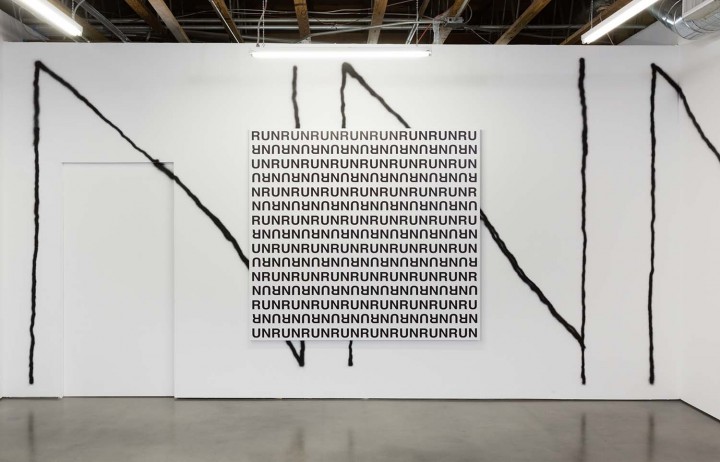 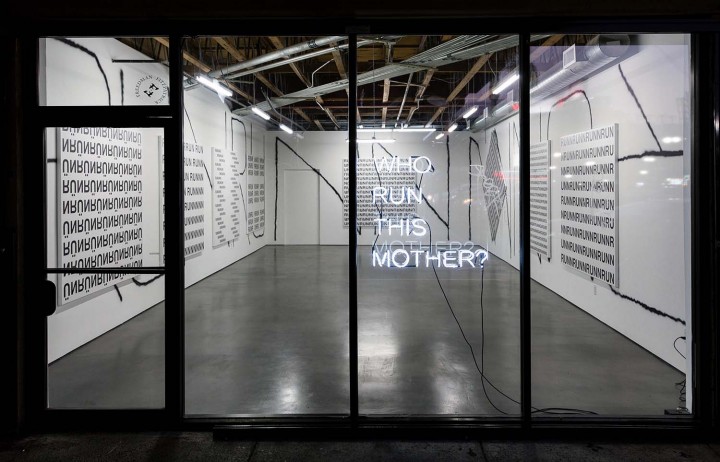 The paradoxical title of Karl Holmqvist’s exhibition “MEN ARE WOMEN,” on view at Freedman Fitzpatrick in Los Angeles, contains a key to decoding the signs that lace the gallery walls.

From one side of the cube to the other, a word spray-painted black stretches out into RUNRUNNNNNUR, flipping after the long skid of the NNNNN, the edges of its large letters peeking out from behind a series of prints on nearly six-by-six-foot square white canvases. On the canvases, the three letters are distributed in a variety of permutations: inverted, spatialized, with letters doubled, with an added umlaut, or combined with the word AROUND into a tight mesh of circularity.

Holmqvist belongs to a tradition of concrete poetry, with roots in the verbivocovisual of the Noigandres Group in Brazil, which passes, among other trajectories, through methods of Burroughsian cut-ups and the fraying of poetry and conceptualism in the 1970s. Not a poet who does things with art, Holmqvist prefers to define himself as an artist who works with words. Here, the words form part of a larger investigation around power, its relation to codes, habits, norms and the possibility — or dream — of their upheaval. The play of uncertainty begins with the Beyoncé quote hanging in neon in the window, WHO RUN THIS MOTHER, with its questions concerning the power of women, the hesitation between progressive or straw feminism, and the allure of capitalism and power in the glitter and wealth of pop stardom.

The lines, from a text published in one of Holmqvist’s book works entitled ’K — “WE MAKE MAGICS WITH OUR MINDS, WORDS ARE PEOPLE, THOUGHTS ARE PEOPLE, LANGUAGE IS POWER” — detail the projected mechanism of the transformation. Might an anarchic regime of language be possible, in which a principle of equality could make all meanings shift from one to another, black to white, male to female, and all rules be broken, since they are rules? The show is hopeful, yes, but remains melancholy. Is it really enough that meanings can run wild in our minds?

Simple pleasures and little marvels have long preoccupied Shimabuku. Favorite subjects include food and animals. While the work often both…

Two steps into the gallery and you are immediately inside an enormous, jointed painting on raw canvas, with a video… 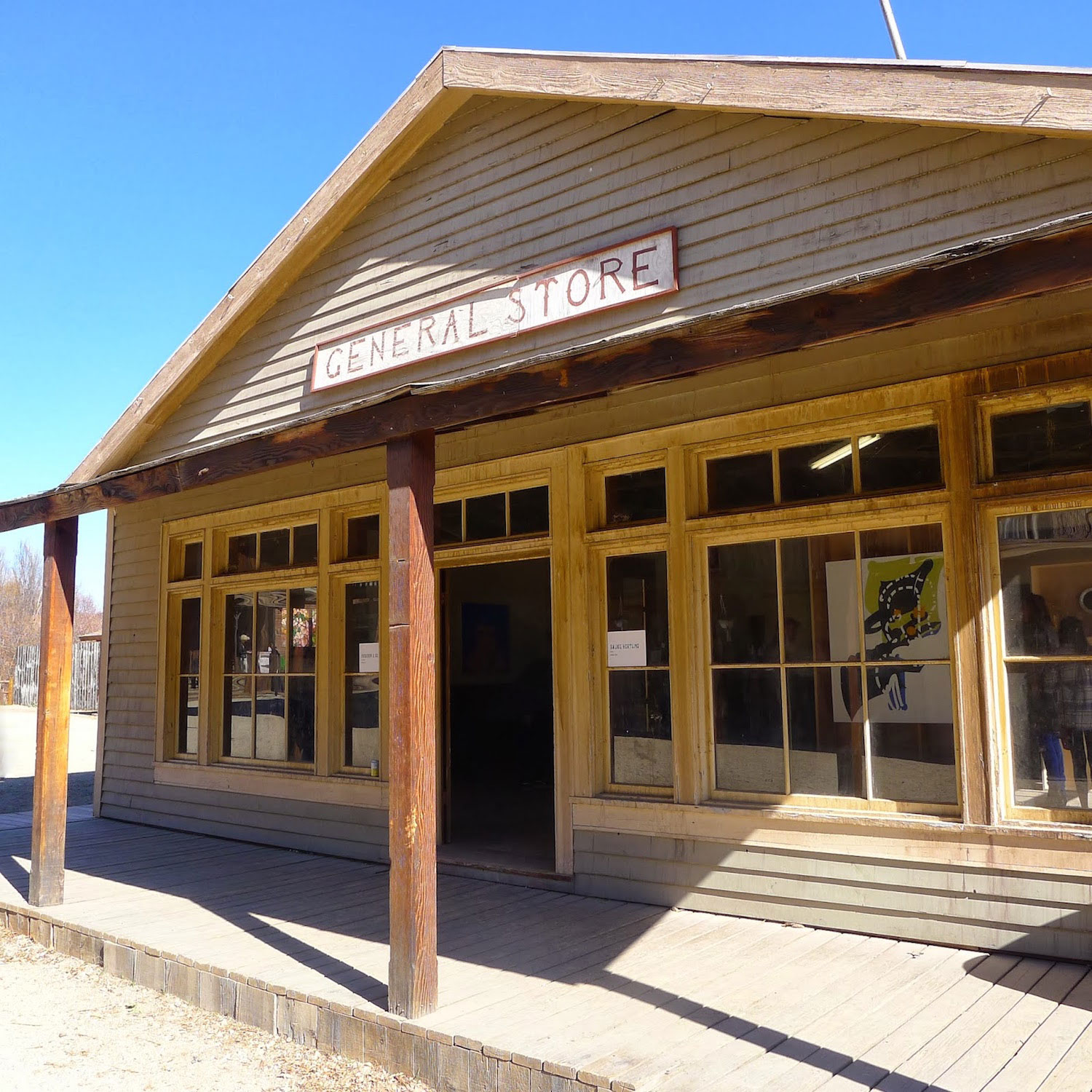 Just outside Los Angeles, amid the canyons and rolling grasslands of the Santa Monica Mountains, sits a dusty Old West…