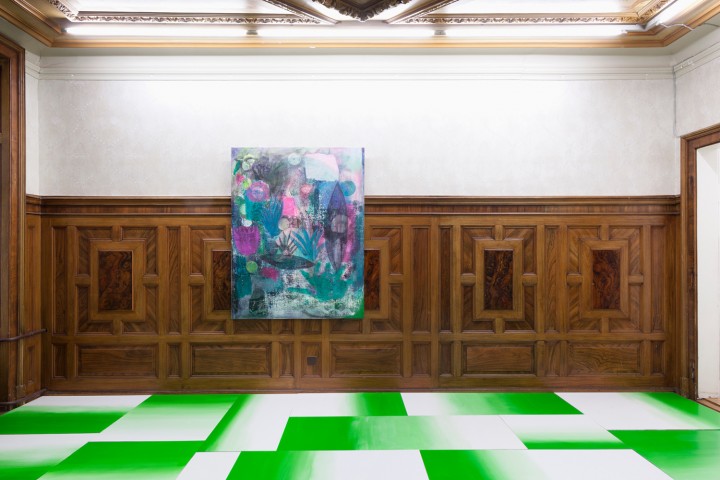 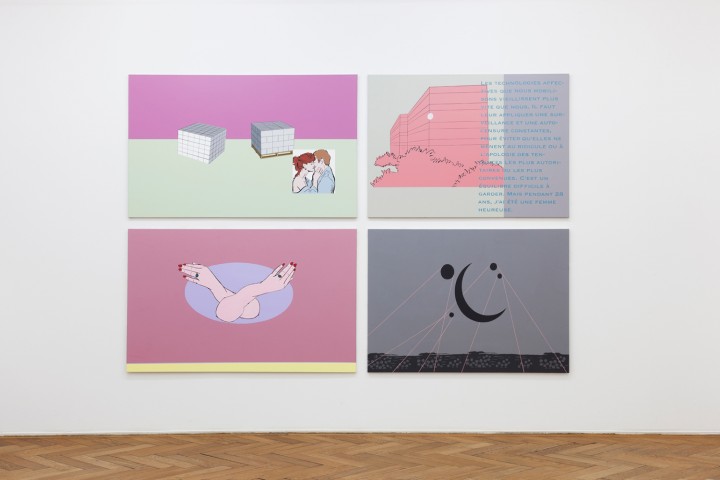 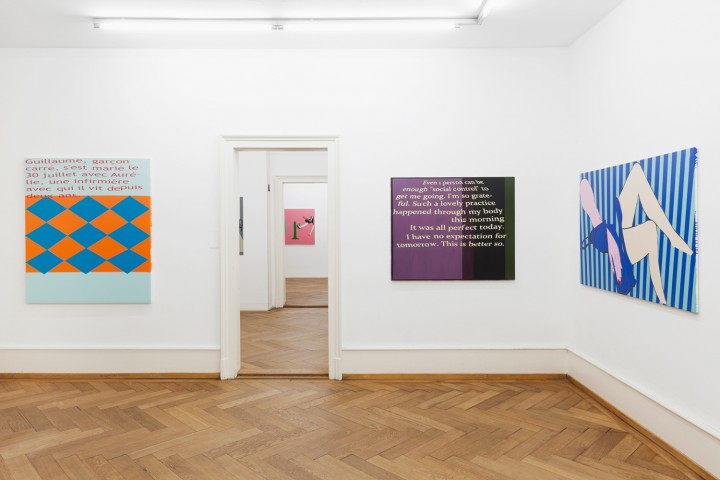 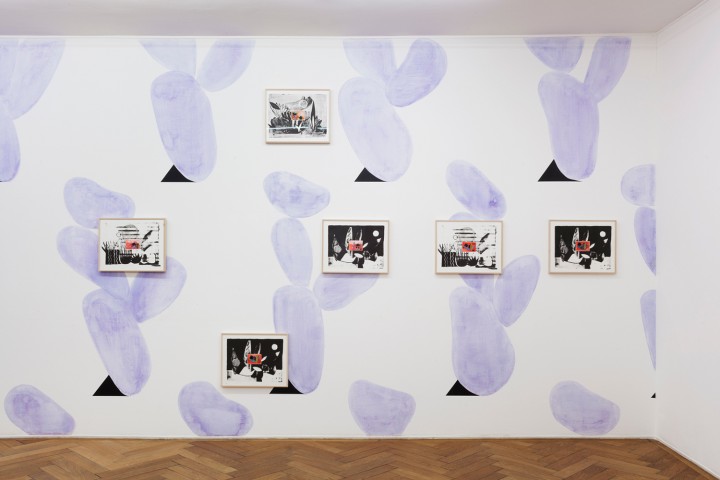 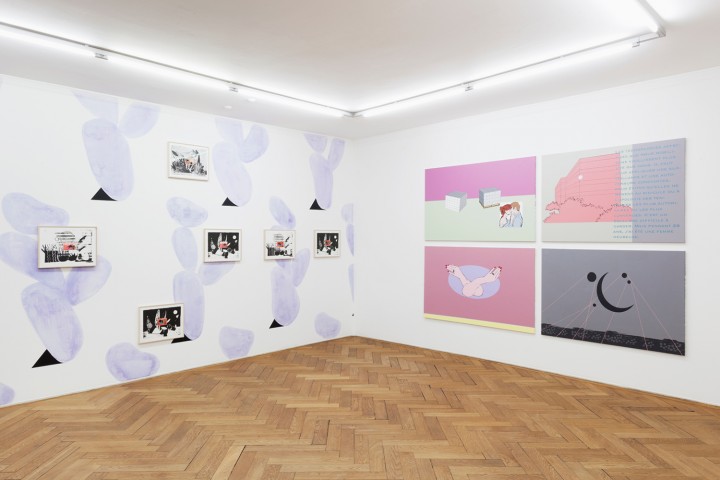 Kunsthaus Langenthal presented an exhibition of two young Swiss painters; besides their respective virtuosity, Charlotte Herzig and Andreas Hochuli’s “Il frutto dentro di me” reveals complex gendered associations. Whereas Herzig’s canvases and contaminating wall interventions play out a style associated with the feminine, Hochuli’s more rigidly displayed work and mechanical method of painting suggests the exact opposite. Her soft tones, transparent layers, impressionist and sensual rendering of nature oppose his abuse of representation, meaning and surface; a stance typically associated with the male subject. Her intuitive, prelinguistic and gestural dance stands back to back with his always deferred and textual fear of music. Confirming this interpretation is the fact that we are confronted with a mise en scène of two different kinds of repetitions: where she multiplies and populates in continuity by reinterpreting the same motives, he constantly isolates and differentiates words, colors, images. Where she deepens intuition, he distanciates the variety of things that populate our artificial, humanized environment. Invited to add a contribution in one room, Christopher Füllemann’s exuberant sculptural environment offers a queer mediation between both works.

This curatorial gesture applies the tradition of allegorical montage to the male/female subject. Painting’s impossible obsolescence and permanent return is designated as the ideal surface of inscription for the libidinal complex. The alternance of both works makes one oscillate between the feeling of being always already in a pleasure zone, or forever only watching; but never both together. The non-communication of styles, here purposely accentuated, inscribes a painting show in the tradition of the bachelor machine: it doesn’t matter if this game was played consciously, since what we tried to designate here can precisely not be. 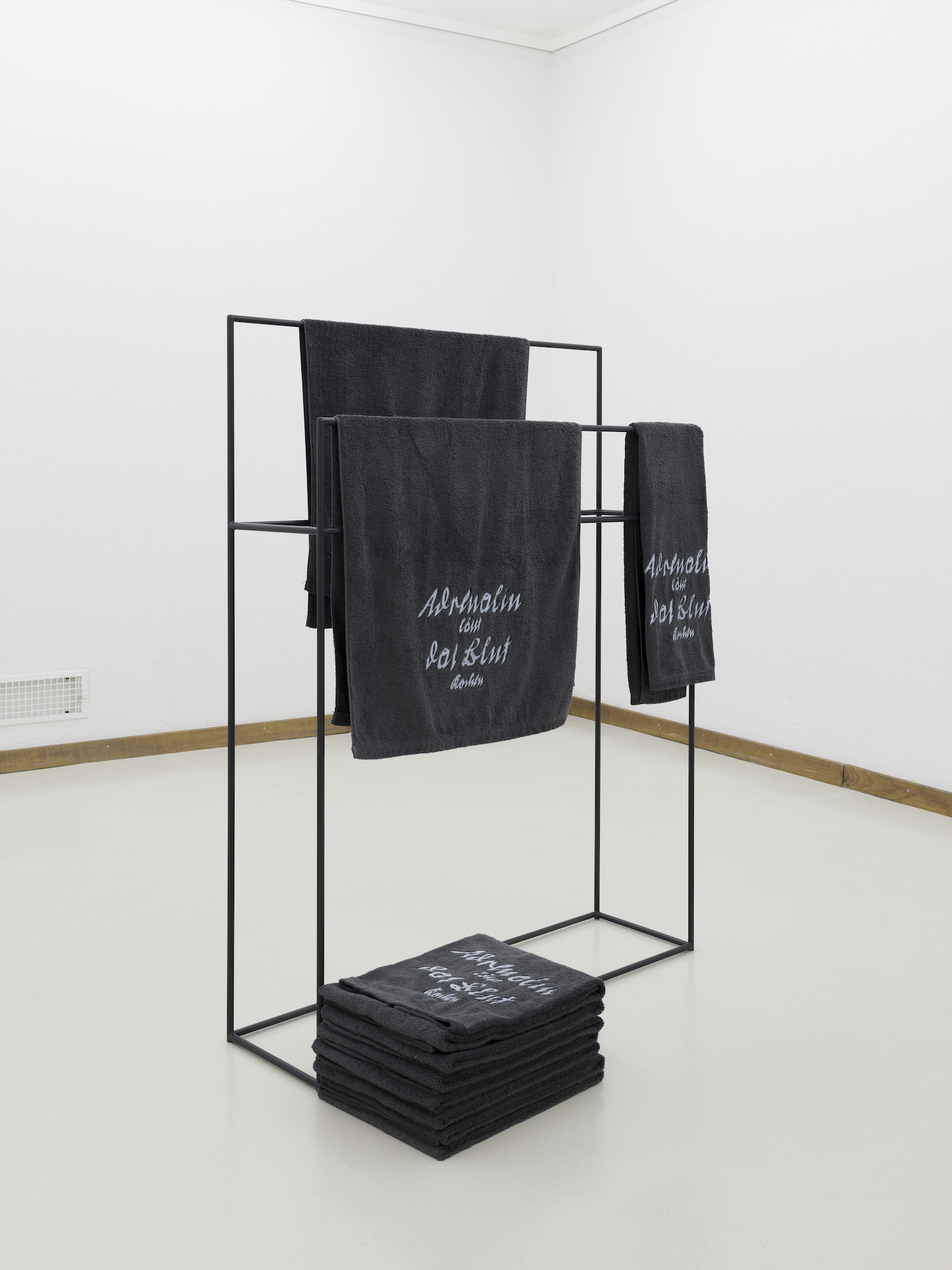 Marta Riniker-Radich’s survey inside the modernist setting of Kunsthaus Glarus is flooded by light filtered through skylights and garden windows.…