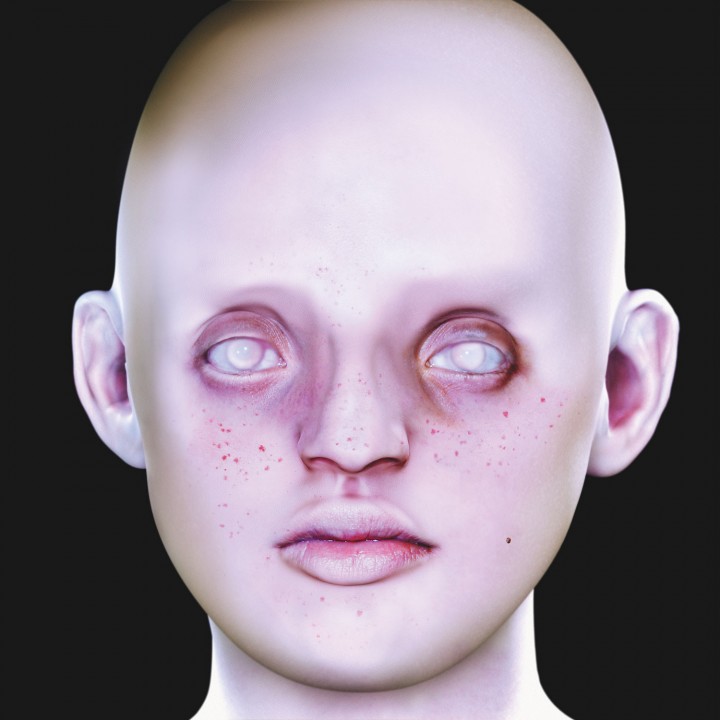 There are no words on Xen. Occasionally, there’s an utterance, a fractured kind of cocky holler in its title track, as a slanted chopping motion contorts across the shattered glass of a ruthless, arrhythmic hammering. The labored thump of a low bass beat interrupts the meticulous chaos like a hole punch over the climbing seesaw of a rising, screeching melody, the sound of sighing metal building before it dissolves into nothing.

This is part of a full-length album by Venezuelan producer and global-queer product Arca, to be released on the influential British label Mute Records, and as I’m constructing this violent analogy it occurs to me that Alejandro Ghersi might never have used a hole punch at all. Here’s a twenty-five-year-old born in 1989, a time when home computers were taking hold, modems soon to follow, and the networked revolution was about to detonate. When did he ever use a ring binder?

In “Wound” there are words. Maybe. Almost. They’re humanoid murmurings that launch from Ghersi’s own orifice only to filter through an electric current; they’re pitches bent and transmuted along a simulated string sample of synthesized melancholia. Moans that melt into an eternal transmission run deep in an orchestral abyss, undulating into space. A wound is an opening too; a forced interjection of mortal pain, it’s a tender cry of ruptured flesh and bone heard only through the sight of blood. And in Arca’s synaesthesic world, seeing is as good as hearing.

Born in Caracas, educated in New York and now based in London, Ghersi is a part of one of the most prodigious and intriguing electronic art collaborations working today. Visually, he works almost exclusively with housemate Jesse Kanda, a self-taught CGI artist born in Japan and raised in Canada. They met remotely through online user-made art sharing community DeviantArt in their teens, and they’ve stayed best friends ever since, together producing thrilling audiovisual artworks, all accessible on the internet. Now living and working together in one place, the two artists’ shared practice transcends boundaries between any outmoded notions of sight versus sound, physical versus digital, pop versus underground, to make a mélange of music and images in which bodies are fluid, gender looks like the construction that it is and perversity is the rule.

There’s something equally sensual and repulsive about the subject of Ghersi and Kanda’s video for “Thievery.” A Hottentot Venus-like cyborg character moves, humps and grinds to a halting merengue rhythm as the shrill beam of an organ melody comes as close to a pop hook as Xen will ever get. The album’s title is taken from Ghersi’s sexless childhood alter ego, invented by him and re-imagined by Kanda across infinite, manipulable forms — from the wobbly majesty of a human-like shape risen from cascading skin on the album cover, to the milky blind eyes of a doll-like headshot appearing in Kanda’s Twitter feed as “’ baby Xen ’.” Referred to as “she” but essentially a “they,” Xen is monstrous and dazzling. Her extraordinarily proportioned body moves, folds and sways in unnatural contortions, alien-green skin glimmering and glowing slightly red in front of a dull spotlight. Xen is revealed only in fragments, as the capricious glare of light flashes erratically across her gyrating body. There’s something oddly fascinating about her bald, androgynous head and expressionless face; her robotic figure moves casually to the combative beat of a snare drum, underpinned by the subsonic urgency of a persistent pitch that stretches out from under her. A flash, a shudder of light, reveals the brief horror of a groin of liquefied pinky-blue flesh before Xen ends her mechanical dance by bending back and prostrating herself to the marching piano keys that dissolve back into the “crackety-tap” of that same omnipresent snare. The sound of a spiraling signal fades out. The scene is almost entirely black, except for the glitter of Xen’s arched torso as you watch her — an animation, a figment of the imagination made immaterial — straining to keep her position. She breathes.

Stewed in the melting pot of New York’s already legendary queer music, fashion and art scene centered around its GHE20 G0TH1K club nights, Ghersi, who moved to the city to study music at seventeen, is just one of a beguiling cluster of creative and politically aware misfits that emerged from a social and collaborative cross of cultures and disciplines that reached fruition around 2012. Inspired by both New York’s rich vogue and mutant disco past and its deformed bass, grime and pop culture present, it was (and still is) a creative community that would yield the hugely exciting and boundary-pushing work of the likes of rapper Mykki Blanco, producer Physical Therapy and DJ and fashion designer Shayne Oliver of Hood By Air. Sure enough, Arca would go on to impact all of these projects — from the punk-inspired hip-hop performance art of Mykki Blanco & the Mutant Angels to the YouTube music videos for Hood By Air’s gender-bending cultural deconstructions-via-clothing.

The “Tina” video, credited to “$HAYNE & ARCA” for the “222” Hood By Air Classics collection commissioned by Bjarne Melgaard for the exhibition “A Reality Testing” in 2012 features Physical Therapy’s Daniel Fisher perched on a swivel stool, rotating and dressed in HBA street wear with a non-gender specific turn and miscellaneous flamboyant wigs. The video, “based on the relationship between bare-backing and meth abuse,” moves to a strange and slow-motion mix of equally odd and unstable singer-songwriter Lana Del Rey’s “Blue Jeans.” Fisher, dressed in casual drag, carries a blank expression similar to Kanda’s Xen on “Thievery”; the only evidence of emotion comes in a face smeared with mascara. It looks like he’s been crying.

“WLACK BIDOW” is another mix by Ghersi and Oliver, produced as part of a 2012 Carissa Rodriguez exhibition at Karma International in Zürich. It opens witha slowed version of underground house pioneer Frankie Knuckles’s “Your Love” before flopping idly over into Cambodian-Canadian Honey Cocaine rapping “got a Asian bitch on my left side. Another Asian bitch, right, right side” from Tyga’s “Heisman (Part 2).” Moving at a languorous pace, the nineteen-minute mix runs through an impressive roster of pop divas. There’s a robotized spoken word interlude from Beyoncé’s 2003 debut solo album Dangerously in Love (“Yesterday I tried to paint you, but the colors weren’t beautiful enough”). Then there’s the eerily pitch-bending chorus of Ghostface Killah’s “Cherchez LaGhost” by Madame Majestic (“maybe he’ll find her, maybe he won’t”). Mariah Carey. Whitney Houston. Alanis Morissette. Ghersi and Oliver absorb these pop plunderings of embodied and empowered women into their own congested headspace and announce “Original Music by $HAYNE & ARCA (HBA).”

This is where Ghersi’s work gets super interesting. Through his relatively short career as Arca (because his other self once existed as a producer called Nuuro; before that, a classically trained pianist. Still young. Still closeted.) Ghersi has been responsible for producing some spine-tinglingly grotesque pop mutations. Right through his evolution from his first album, Barón Libre, and then the Stretch 1 and Stretch 2 EPs — all released on taste-making New York label UNO NYC — Ghersi has unofficially dropped mixed, mashed and manipulated versions of Aaliyah’s “Are You That Somebody,” Missy Elliot’s “I’m Really Hot” and Nelly Furtado’s “Showtime” through his Soundcloud. The latter remix, appearing free to download, along with a lot of his other work, doesn’t actually vary from the original all that much. The wavy melody of some kind of out of tune harmonium-resembling synth sound is in the original, as is the meticulous rhythm of Furtado’s infectious lyrical delivery. But somehow Arca manages to take a magnifying glass to the song, identifying, compressing  and stretching those small details that make “Showtime” such a brilliantly constructed pop song and makes it even better, if not weirder. Like the transformative nature of a convex lens, the image — or in this case, the sound — that it produces depends on how you angle the glass; where it is, where your eye is and how much distance there is between the two. Arca applies this approach to his work liberally, and it’s this sort of instinctual impulse to explore and become immersed in his sonic subject-as-malleable object that is directly reflected in Kanda’s work.

Take “Fluid Silhouettes,” for example. Commissioned for the online boutique SSENSE, the video opens on a limp synthetic head, black-skinned and gleaming with sweat, before being pulled apart by sound itself — its neck twisted, tendons relieving a dull crack. The figure expands, morphs and transforms into a fabric-like material that moves restlessly with a hollow tabla-sounding thump of Arca’s making, suspended in a white, then pink, abyss. The pitched-down and masculinized vocal of Britney Spears’s 2001 hit “I’m A Slave 4 U” lumbers above it: “I need to do what I feel like doing, so let me go.” A winding synth zips and whizzes, dashing across the track’s feverish rhythm as this delicate silky black sack is battered, beaten and blown in and out of anthropomorphic formby a hurricane of invisible sonic force. While watching the image, one becomes acutely conscious of how everything is form and everything is movement; the distinction between music and motion is as blurred as the distinction between image and matter.

It’s hardly a surprise that Arca is the sole co-producer of iconic polymath Björk’s yet-to-be-released ninth studio album. Transcending disciplines for a nearly forty-year career, the Icelandic artist’s visual collaborations with the likes of Michel Gondry, Spike Jonze and Chris Cunningham remain at the vanguard of experimental music. Björk’s last album, Biophilia, was yet another groundbreaking concept album linking nature, music and technology, while diving headfirst into the growing global online network by launching as an app. Arca and Kanda emerged another way, generating a buzz by producing work intended solely and specifically for online consumption. Posting YouTube videos as Arca, for SENSSE and FKA Twigs, and releasing a slew of free-to-download music, including last year’s critically acclaimed &&&&& mixtape, the duo have come out of the computer screen and onto the live stage in a most spectacular fashion. They premiered their &&&&& companion film in a performance at New York’s MoMA PS1. The live production established the immense potential of their conjoined creative force. Here brittle morphogentic forms flex and flicker in a cluster of residual gestures that defy physics. Supercomplex forms loaded with physical, historical and emotional information crash and collide with each other. A writhing and rippling wave of smoky matter funnels itself into a glassy organ that weeps water and feeds into a billowing bag of skin resembling an infant. Light. Bass. Black. Beats. Speed. Images, ideas and sounds rush past in an overwhelming state of information overload. It’s a visceral, experiential experiment with a body that is a product purely of the mind. I could say more but words won’t do it justice.

Steph Kretowicz is a London-based art and music writer, contributing to Dazed & Confused, Dummy Magazine, The Wire and The Fader among others, and the author of an upcoming book to be published through Penny-Ante Editions in 2015.

Arca (b. 1989, Venezuela) lives in London. Arca’s debut album Xen is out on Mute Records on November 4.

Donatien Grau: You show painters, though for a long time you worked a lot with photographers. Have you come to…

In 2009, Brigid Mason produced a painting titled Saudades (Our Chair is the Same). The painting depicts two wooden chairs,…

Daniele Balice: I have to admit that, at first, your Sex Room at Design Miami in Basel left me speechless…

From Flash Art International no. 143, 1988 Leo Castelli: Let’s pinpoint not my vague awareness of your existence or the…