Puppies Puppies: What do you think about my work?

Nancy Lupo: Before I ever saw the work in person I was thinking mostly about the way it circulates, how it shape-shifts and changes form as it moves through these different worlds. At some point last fall you posted one of Adrienne Rich’s love poems on Instagram, which spoke really precisely to currents I had been tossing in. Similar to the way I’ve never seen Harry Potter or Lord of the Rings, I would guess that a lot of your Instagram followers don’t know Adrienne Rich or about your double life as a contemporary artist.

But then you invited me to your apartment for a studio visit, which changed the temperature of everything. Your husband, Forrest, met me. Wearing a yellow shirt, green shorts, one yellow sock and one blue sock, he guided me through a program of videos labeled with my initials. It included a video of a performative lecture you gave as a grad student at SAIC. Forrest pointed himself out in the audience and said the lecture took place the day after your first date. He remembered wanting to keep his expectations low because he was super into you and was telling himself that you didn’t also have to be a good artist. I laughed because we all know it never works out that way.

Everything in the apartment was in play: pea-green dishes, a sponge, an object from D’Ette Nogle, an avocado, a giant Mardi Gras necklace, a bottle of Amazingreen (upside down), your betta fish Lord, your dog Spiderman in a little sweater. Many of these objects, Forrest told me, are a part of your “Green Works” series, which were exhibited together in ––––– at What Pipeline, Detroit, in 2015, but are a part of almost every show you make and deeply a part of your everyday. Forrest said that he thinks that at this point pretty much all of his clothes are either yellow, blue or green.

From the first I noticed Rihanna’s “Stay” was playing on repeat in the bedroom/background. You told me in advance that you would be doing a sleeping performance for the duration of our visit. Forrest confirmed that it commenced shortly before my arrival when you took an over-the-counter sleeping pill. He said that this is your most repeated performance, with variations that include the type of sleeping pill you take and the mask you wear. At a certain point he opened the door to the bedroom and left me to experience the scene on my own.

And so there you were, your face covered in a Voldemort mask, your body, in a black sweat suit, tucked into minty-green sheets. Next to you on the bed was a human skeleton that may have been painted the color of your skin; I can only speculate, though, because I couldn’t see any skin. Spiderman jumped on the bed and was trying, almost desperately, to snuggle with your frozen body. Forrest was texting in the next room and I was trying to take it all in. The situation implied an overwhelming gesture of vulnerability and trust; I felt I was being given a gift — though a gift that contained within it a measure of responsibility. I left your apartment seeing green everywhere and felt even more that the project has no edges.

PP: Do you think there are bad aspects to that? The lack of edges in the project?

NL: For me Puppies Puppies functions primarily psychologically. It’s most powerful in its pathos and affect. The images and objects set off triggers and then recede. Your studio is not simply at your apartment, it is your apartment. When I came to visit it was also a kind of stage set, although still the place where the necessary daily tasks are performed. Forrest’s wedding ring is a replica of the ring from The Lord of the Rings, which may or may not be a work. Where exactly would the “work” in this potential “work” be located? In an idea from the movie that the ring represents? In the recreated replica? In the marriage of Forrest and Puppies Puppies?

Maybe there is an element of method acting at work? Maybe the blurriness is inevitable given all of the systems in which we have to create masks and then wear them as if they are somehow our real selves. During the filming of My Left Foot, Daniel Day Lewis apparently made the grips lift him and his wheelchair over cables, because in the film he plays a man who was born with cerebral palsy, with little control over his body. At some point, though, the role is over and DDL goes back to Ireland and walks again on his own two feet. His character, Christy Brown, of course didn’t have this option. But what is the shifting ground on this periphery? Maybe it goes into territories that look more like artist-as-sociopath? I will say I also find myself seduced by really intense and electric situations, and I often create bizarre systems of logic and kick up weird dust in my own life and work. At times things can start to feel like a fever dream, like that hedge maze in The Shining where there might not be a way out without someone dying. Not to get carried away — it’s important to remember that even a fever dream is still just a dream, and being in a fog is very different than being dead.

NL: We can probably be placed at points on a spectrum, sure. Would that sort of pathologizing be helpful? Moyra Davey, in her video Les Goddesses, quotes Michael Haneke, who said, “Artist’s don’t need shrinks because they can work it out in their work.” Davey’s question to Haneke is, “But can we do it without Freud?” My question to you is, “Who is Forrest?” In Dante’s Inferno, Beatrice, the absolute embodiment of courtly love, serves as both guide and frame. In this world without edges we might start to wonder if Forrest, cast similarly as the lover, is himself a work by Puppies Puppies. On the other side it strikes me equally that Forrest indeed created a frame, Contemporary Art Daily, that makes projects like Puppies Puppies more visible and available to engage.

PP: I’m glad you mention the psychological. I’m trying to pretend to be an artist I’ve never met — Lutz Bacher — by making this interview with you, an artist I also admire, even while exposing my apartment and family and sleeping body to you. This is supposed to be a bootleg of a series of artworks by Lutz Bacher called “Do You Love Me?” Like any bootleg, good or bad, there are details that reveal this isn’t the real version. This isn’t the real thing.

Everything points to this not being the real thing. I’ve experienced sexual trauma that has left me feeling close to figures like Haneke and that have made works like The Piano Teacher, a masterpiece, become so relevant to me. It talks about power struggles and power dynamics. I have issues with loss of control, and this relates to the sexual trauma I vaguely mentioned earlier among other traumatic events. Forrest speaking for me, my lover speaking for me or standing in for me, reveals an intimate power dynamic that I am still trying to understand. Up close, it might seem as though I’m giving up control, letting someone act in my place. He had the freedom to say and do whatever he wanted when he talked to you. But that switches when you zoom out and think about me controlling Forrest in a way by including him so intensely and counting on him as a work within my life or my practice. His thoughts and feelings are now framed by my own in this context. As you can imagine, this echoes in our lives, too. I’ve broken character intensely by revealing these very personal things, so this is my last question: What do you think about power and control in my work? And how does power play into every aspect of our existence, always?

NL: Between dogs but also between dogs and people, there is playing and there is fighting. It’s often hard to detect the difference when you are on the outside. Situations sometimes do invert in an instant. The details matter, one little thing here or there and we’re looking at a different picture entirely. The currents come from outside and also from inside and just keep coming in your work and in your life, and also in everyone’s life and everyone’s work, everywhere, all of the time.

It’s no joke that when I got your reply I was drinking a green juice called “Epic.” I went home and tried to re-watch The Piano Teacher but couldn’t find a link that worked. This morning I went to see Fifty Shades Darker because it seems to cover the territory in between The Piano Teacher and Harry Potter. I think Rihanna’s “Stay” is also somewhere in there.

But now I’d like to return to Adrienne Rich. Her Twenty-One Love Poems was written between 1974 and 1976 and chronicles several seasons of a love affair with the inevitable vicissitudes of passion. I might say I first fell in love with Puppies Puppies when Puppies Puppies posted poem “XVII” on Instagram. From the beginning, Rich maps an understanding of her “us” as deeply a part of the “rancid” and random everyday. In the world of Puppies Puppies these are hand-sanitizing stations, spaghetti-filled condoms, images of spaghetti-filled condoms and of course everything yellow, blue and green. Nothing exists without its attachments, and this variousness is deeply bound up with our emotional and psychological selves. As Rich puts it in “XVII,” “these are the forces they had ranged against us, / and these are the forces we had ranged within us, / within us and against us, against us and within us.”

At this point I feel compelled to tell you that I do, in fact, love you. We are mutually vulnerable. In conversations that parallel this one, we agreed to play out these scenes, you’ll be Lutz and I’ll be me. We don’t know Lutz or each other except for what’s available to everyone, our work. The project of finding out when and where love begins is irresistible because it allows you to inscribe yourself into something that’s already happening. You get to choose your archetype, although it’s true that archetypes can be vexing, as are readymades. Perhaps I’m slipping too easily into the script to say I love you. Maybe I just mean to say that I’m here with you. I am here with you and I am also vexed.

Puppies Puppies is an artist living in Los Angeles.

Nancy Lupo is an artist living in Los Angeles. 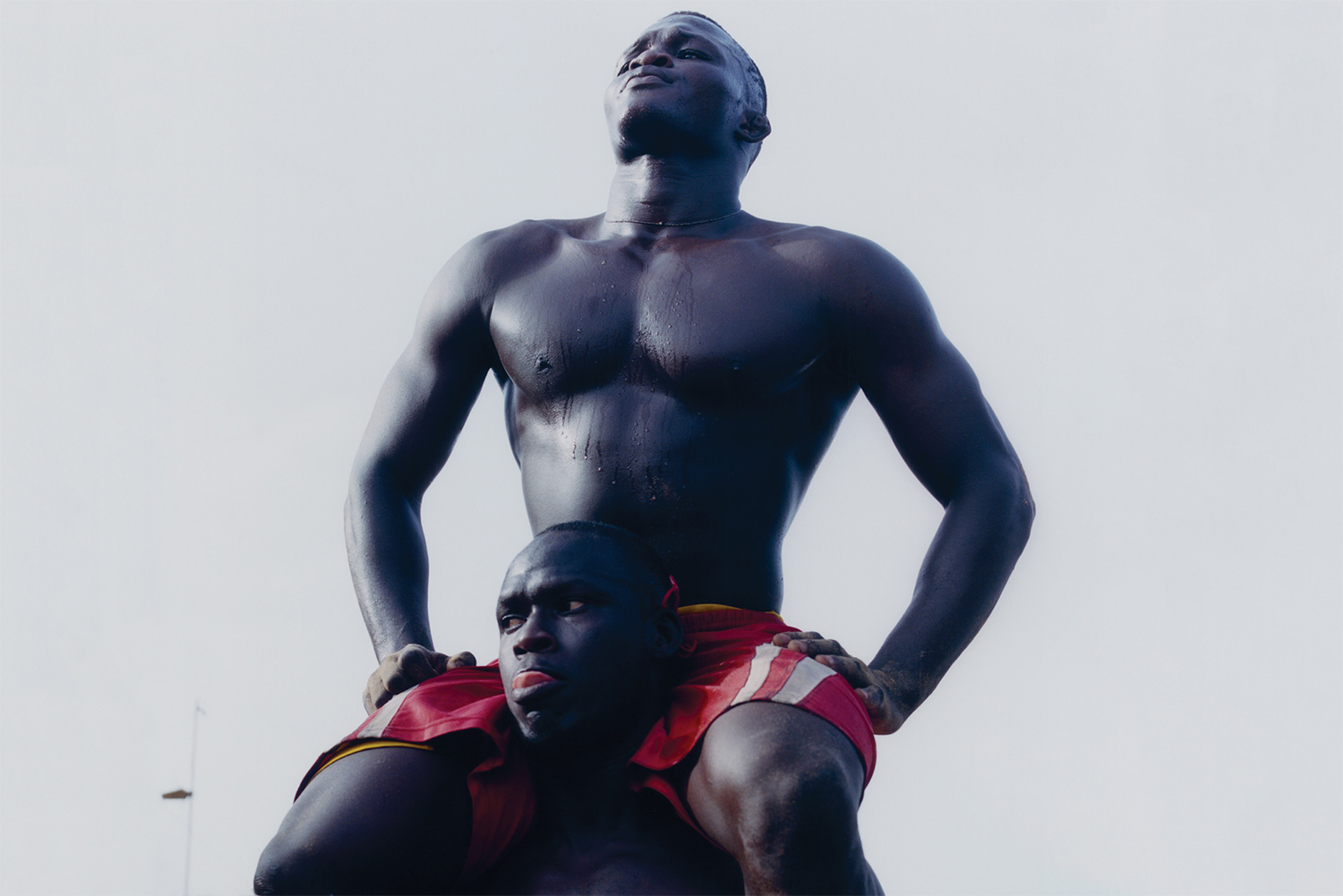 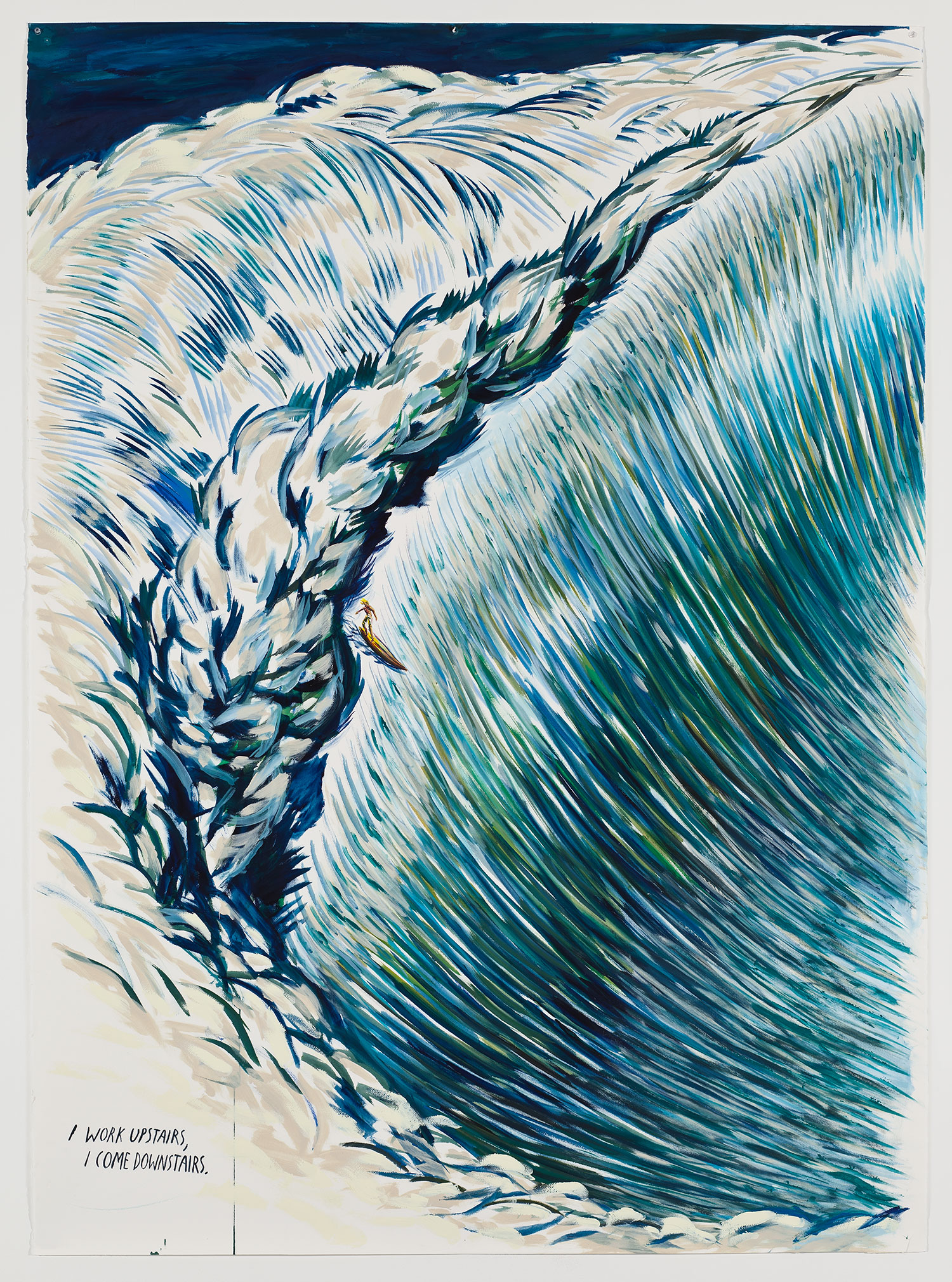 I tried to interview Raymond Pettibon. I thought we might have some things to talk about. We both like Joyce… 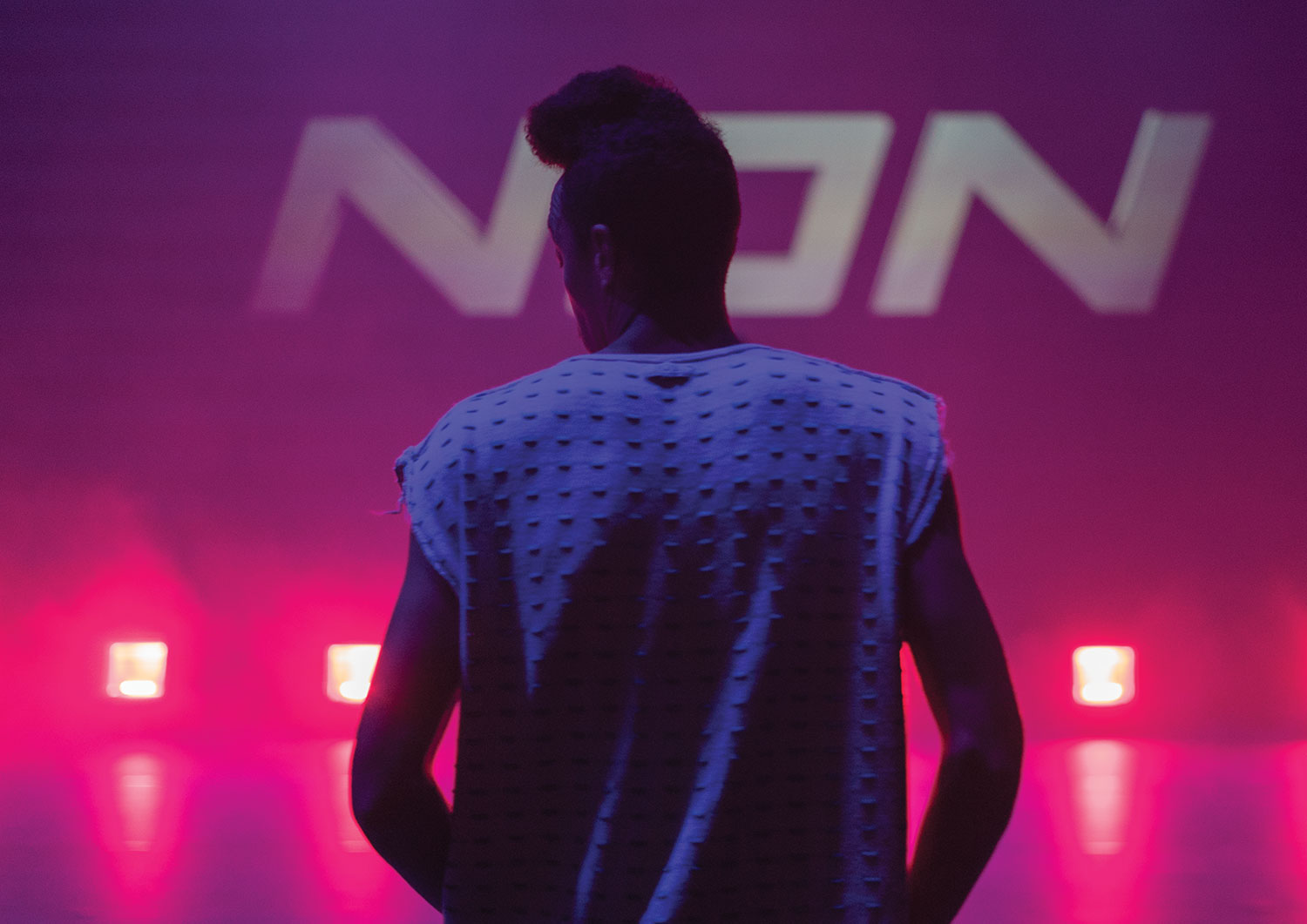 Death drops: breathtaking moves in any vogue dance, sudden and dramatic collapses that meet the ground with explosive impact. NON… 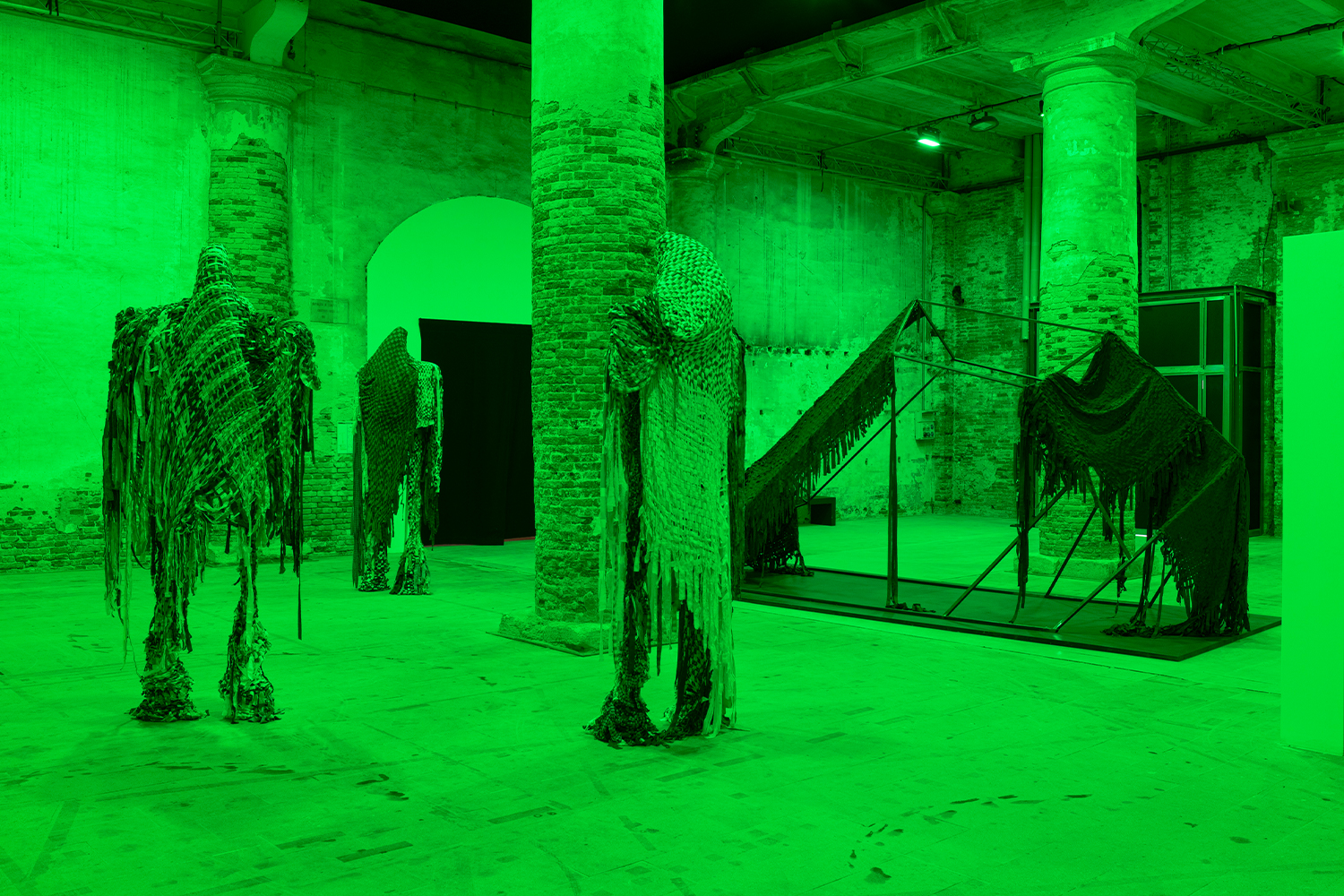 Cecilia Alemani has curated a posthuman biennial, or so the worldwide press reports. The New York curator used the term…