Brendan McGetrick: Your installation for The Unilever Series commission recently opened at the Tate Modern’s Turbine Hall in London. That seems to me a very difficult commission, not just because of the prominence of the institution and quality of past recipients, but due to the character of the Turbine Hall itself. How did these aspects affect you?

Ai Weiwei: As you say, The Unilever commission is a program that’s been running. I’m already the eleventh person invited by the Tate to do this. Of course, you see that those artists go in very different directions in terms of their personal histories, their artistic statements and their public performance. This is important, because The Unilever commission really is a public performance, given that it’s in a public space that attracts a few million visitors and a lot of media attention. I felt that the work had to have some kind of relation to that condition. It could be a very minimal relation, but still you need to decide what kind of position you want to take. You’re not really trying to prove something to yourself or to challenge, but rather to speak very quietly but certainly about certain elements of life. It’s really a metaphysical thing, because you present one work to the public, as a statement. It’s very difficult: it’s as if someone asked you to say one word about your life or your ideology. I think most people would say “God,” but my type of work is mostly about uncertainty.

BM: If the commission requires you to define yourself according to a single work, why did you choose to make millions of porcelain sunflower seeds? What does that material and that subject say about your life?

AW: The sunflower seed is a kind of nightmare haunting me, because when I was growing up, the Communist society was very limited. We didn’t have many images, besides the hammer and sickle, Chairman Mao’s book… probably ten images or less defined that time. Everywhere — in children’s books, on posters and in newspapers — everywhere we saw the same images, and one of the most important was the idea that Chairman Mao is the sun and we’re all sunflowers. The idea was to represent how loyal people should be during the Cultural Revolution. At the same time, life itself was very limited. To drink, you only had water. You’re either thirsty or not thirsty, and when you’re thirsty you either have water or you don’t. There’s no choice. But sunflower seeds were one of the few pleasures everyone had. It’s a little bit personal. In everybody’s pocket or on everybody’s table you’d have these seeds, and on happy occasions or not so happy public events — like class struggle meetings or self-criticism meetings — you would find them and people would share and tolerate each other. The sunflower seed was one of the things that helped you survive.

BM: And why porcelain?

AW: In my work, I try to do things that can relate to artistic materials or to materials that have been refined for other reasons because they express high culture or expensive tastes or because they are associated with a certain history, memory, status or class. In my opinion, the status that those kinds of materials reflect is problematic. So I try to find subjects that are immediately recognizable but at the same time denounce the old value judgments. It’s all dealing with our preconceptions and by doing that I think we can somehow reinterpret our lives. When we say we understand the meaning of something, it means that we feel very safe about it. Every aspect is solid and unshakable and we know what its origin is. But putting some twists on it really bothers us, because that safety disappears. It puts us in a new area of knowledge, one of uncertainty and danger. I think that makes us alert about an incident or event, and that can ultimately overthrow our understanding of the world.

BM: When did you first start working with porcelain?

AW: My fascination with porcelain started in ’76 when I first started to work with it in a porcelain factory. Then I forgot about it for a long time. After I returned to China [from New York], I started to collect antiques and became much more knowledgeable about ceramics. It’s actually fascinating, because I, as contemporary art worker or whatever you want to call it, tried not to touch those ideas of traditional craftsmanship or classic work. But for me it’s such a pity that we can’t use that set of language and knowledge in a contemporary context. It’s a pity to not help it survive through the changes in fashion.

BM: I’m curious about your experiences as an antiques collector. In the past, you’ve done several works that manipulate or destroy artifacts from China’s cultural past. What is the attraction of antiques for you?

AW: First, antiques are the evidence of a cultural crime. Antiques can show in a highly dense way what a certain people in a certain time and location were capable of in terms of thinking and making. It reveals what was really in their minds. If we look at history, nothing can give us more vivid a lesson than those pieces of evidence. You can talk about Greek or Roman civilization, or India or China or whatever. The image is still the most powerful. If we think about the United States, we think about Coca-Cola or McDonald’s. And those things are so strong and so clear that we almost don’t need another explanation. I suppose that’s why art projects are needed — to reveal how history has reduced everything into such a nonsense image. Another issue is about value. In China, there are so many things in the antiques market that you find in Western museums. In the West they are considered treasures, but here you can wake up at 6 am and go to the market and find people selling them for a few hundred yuan. It brings up interesting thoughts about how people make judgments, what is real, what is fake. I’m very interested in the reasoning behind our values. It’s a system that is actually quite fragile, but we all have to live by it.

BM: Do you see a parallel between the condition you describe in the Chinese antiques market and the international contemporary art market?

AW: Yes, I think in either case people are desperately seeking something that they are not familiar with — or at least something that is already familiar but can have another meaning. We don’t necessarily believe what we say and may even think that other people are lying to us, but we still feel that there might be another layer of meaning there. Warhol said, don’t try to find another meaning in my work: what you see is what you get. But nobody believed him, and of course nobody should believe him, because even he didn’t know what he was talking about. So an artist is someone who acts in a way that he doesn’t fully understand, yet still has a reason for it. It could be money or fame or whatever strange reason, but the fact is that they made this event and it has to be public. So that becomes part of the cultural evidence.

BM: What was your response to the Turbine Hall when you first visited?

AW: I was aware that by character it is a large space and it has a history of being made for something else. So, it doesn’t matter how rationally the space was designed; it was still made for something else. That always brings another layer of meaning to the work. It’s similar to the production process of the piece: the sunflower seeds were all actually produced for something else, because nobody who was really making them understood what was going on. Even if you explained to them the purpose, they still wouldn’t know, because there’s a whole set of vocabulary that just isn’t there. It’s not possible. At the same time, there are so many people at the exhibition who are trying to interpret the piece as a kind of ritual.

BM: And your ambition is to inject uncertainty into that ritual?

AW: Yes, because I think that the ambition to impress people is not a good one. At the same time, how do you put your personal interests into a very public arena? It’s not always going to meet what is typically considered the standards of a so-called successful project. You don’t know how far the audience will go with it, and if they do, what does that mean? Is it better if people love it? On the other hand, you’ve been chosen and you have to do it, so you’d better not feel regret if your work inspires something that you’re not really prepared for.

BM: Did you think much about audience response when you were working on the Tate piece?

AW: You have to, it’s public art. It has to stay with the people in that area for a very long time, and they have expectations about what is going to happen. I don’t think anyone can say, “I don’t care at all.” If you don’t care, why bother? But of course, the care can manifest differently — it can be irritating or difficult or it can be love.

Brendan McGetrick is an independent writer, editor and designer based in Beijing.

Ai Weiwei was born in 1957 in Beijing where he lives and works.

He is the recipient of the eleventh commission in The Unilever Series for the Turbine Hall at Tate Modern, London. The installation is on view through May 2, 2011. He is also currently on show at Urs Meile Gallery, Lucerne (Switzerland) through December 18, 2010.

To reflect upon an exhibition that took place over 40 years ago is a strange and salutary experience, and I…

Hans Ulrich Obrist: I know that you started very early and were a wunderkind of sorts. So, I wanted to… 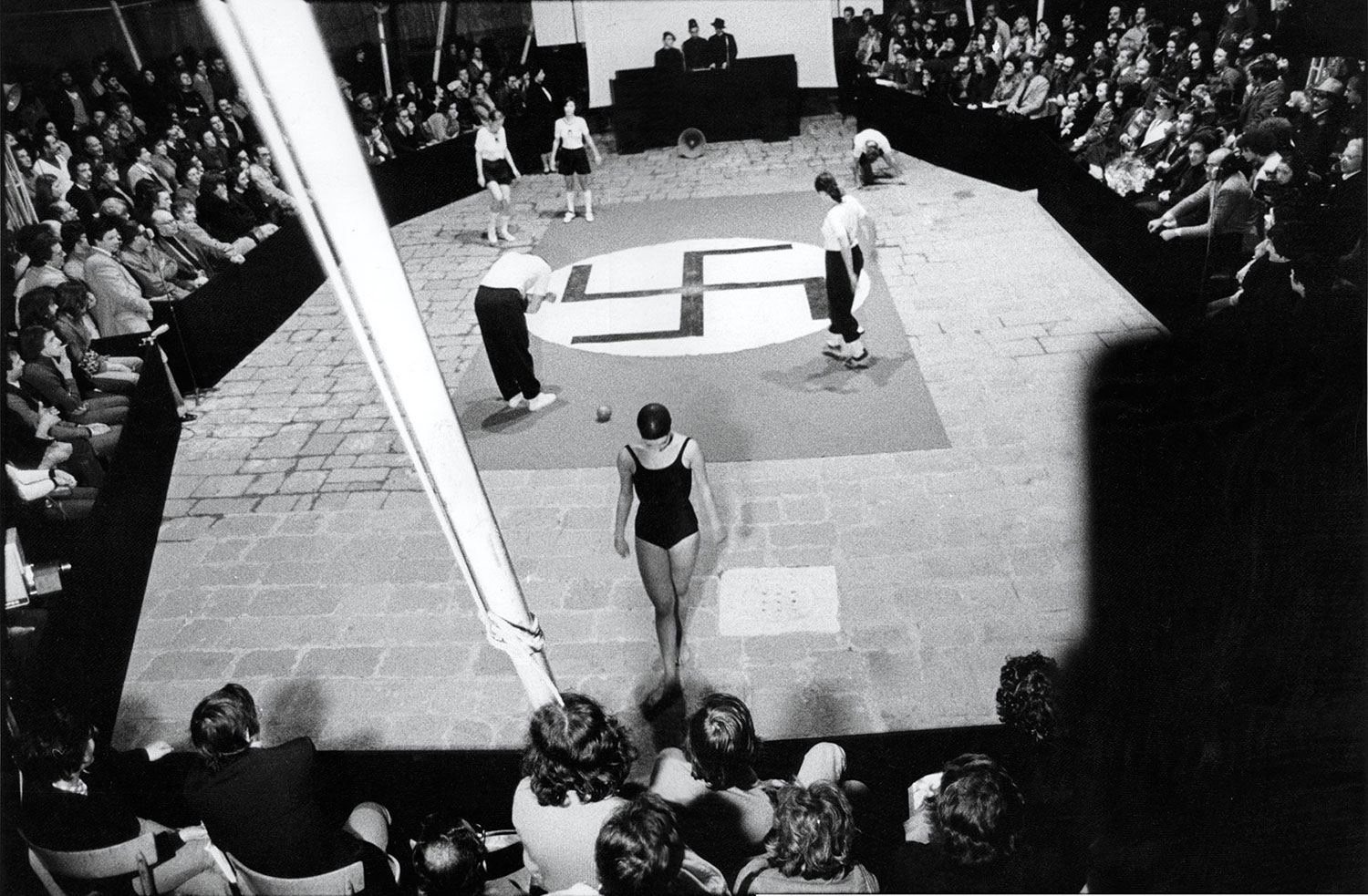 I did my first interview with Fabio Mauri in 1989, when I was working on an essay about the art…