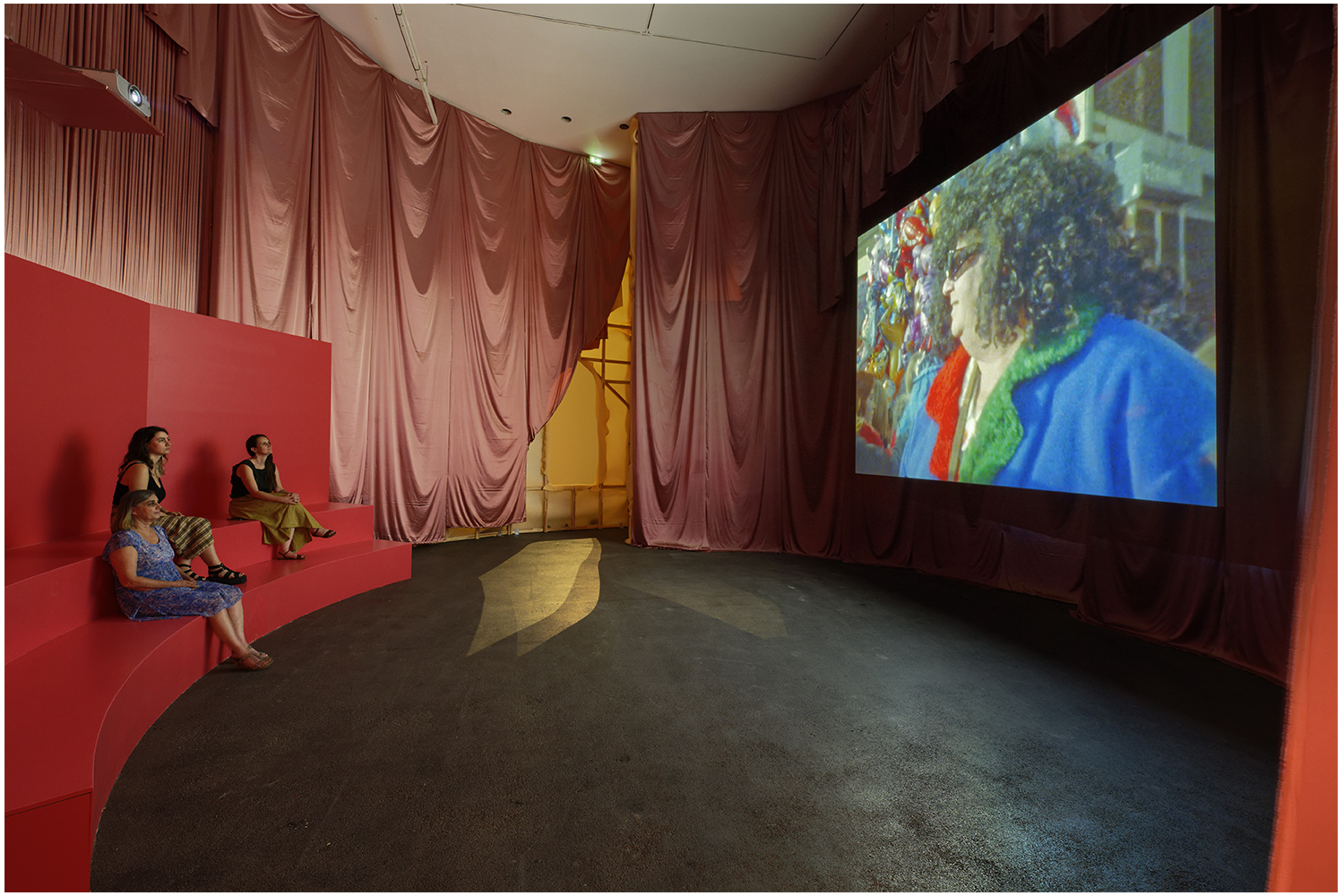 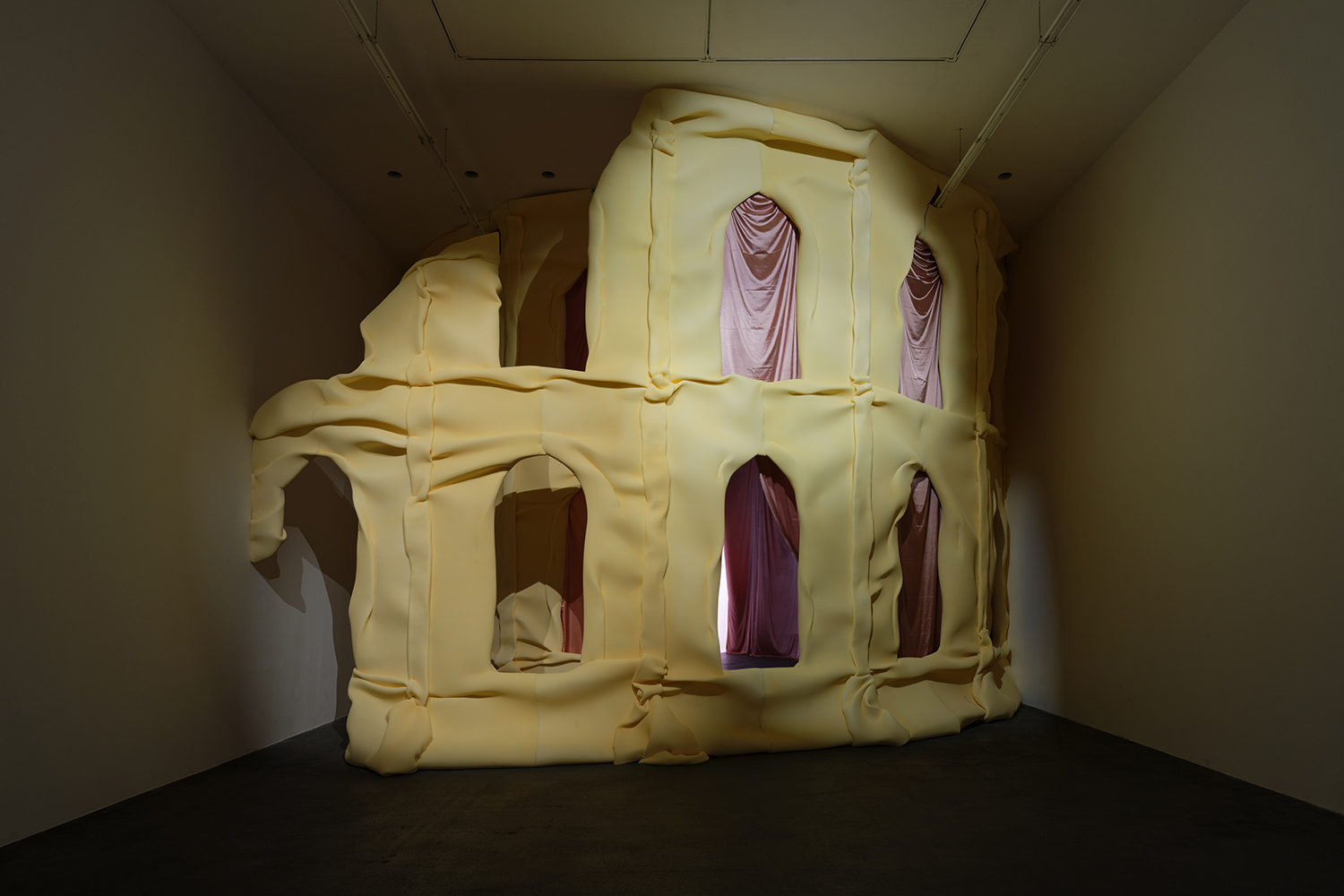 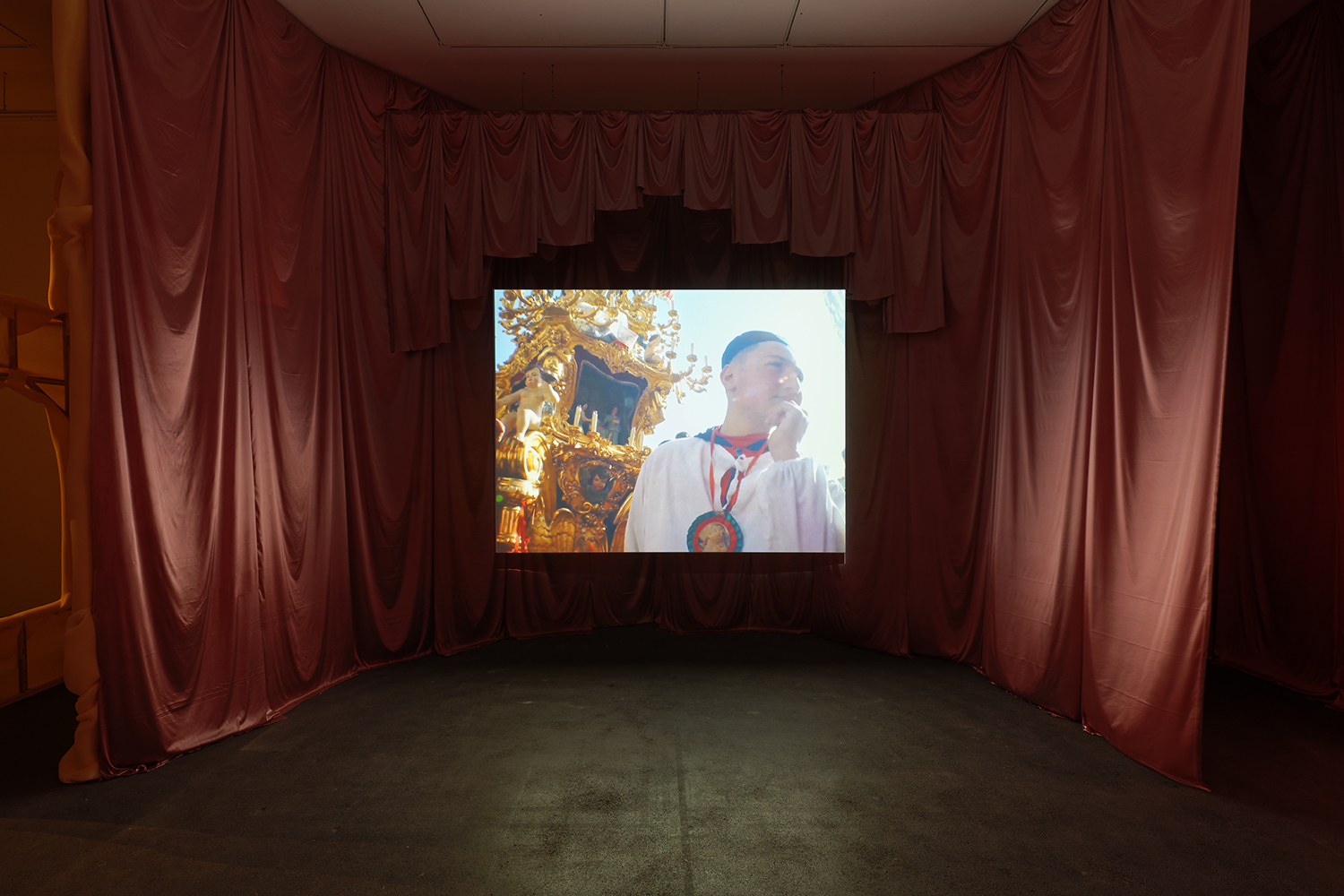 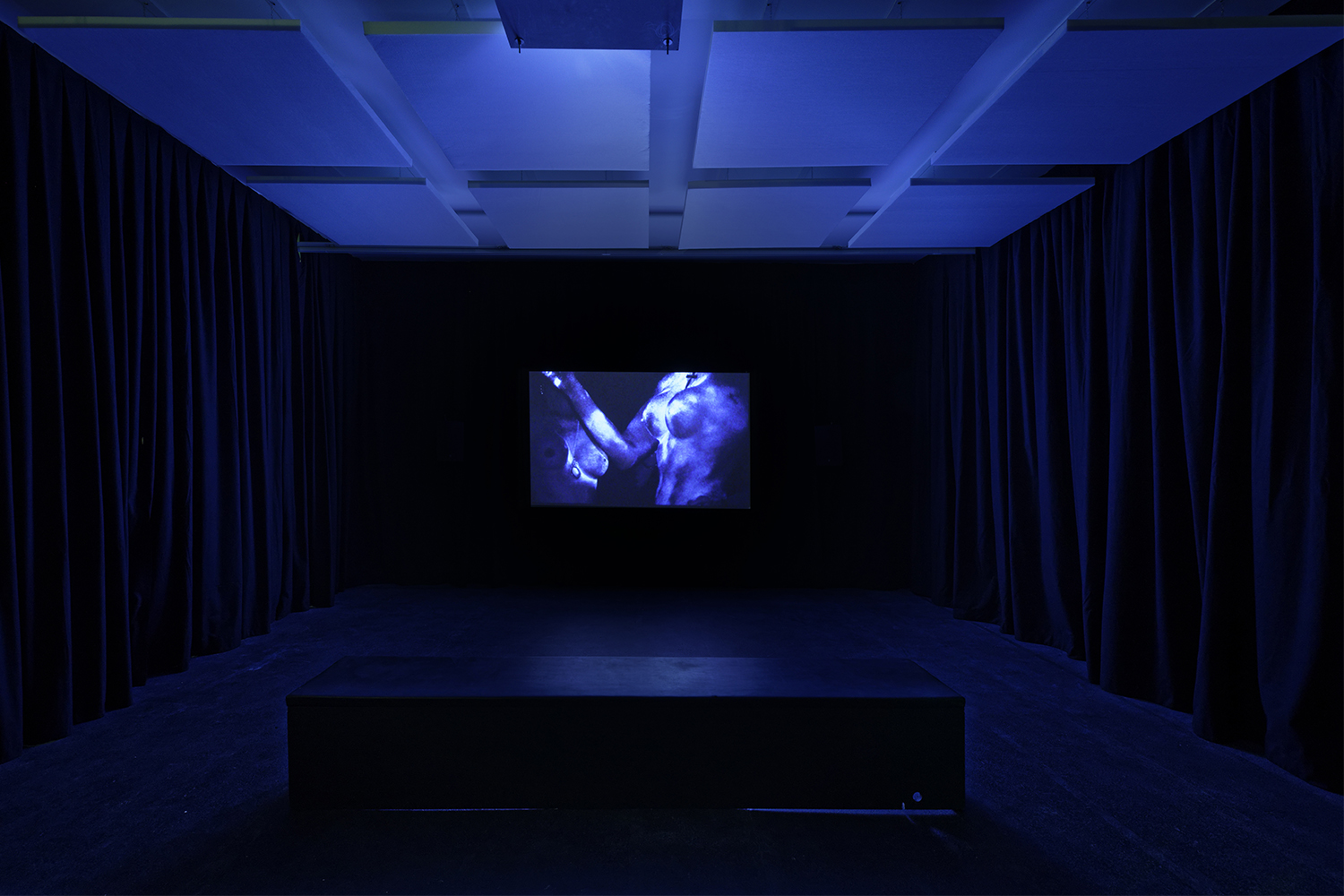 Pauline Curnier Jardin (born in 1980 in Marseille) is a visual artist, filmmaker and performer who draws from a vast repertoire of references, ranging from Graeco- Roman mythology to folk tales, from various religious practices to pagan rituals.

Her films and installations, which she often conceives as theatrical stages, reflect spaces of play or popular entertainment, such as circuses, cabarets, carnivals or fun fairs, worlds where all identities, every kind of cross-dressing and reversal, is allowed. In a kind of wild and organic ethnology, Pauline Curnier Jardin documents various rituals: processions, pilgrimages, votive festivals…
Her vocabulary stems just as much from extravaganzas as from horror films or Z movies, while being populated by strange characters both grotesque and uncategorisable, or marginal figures roaming the fringes of cities as well as those of social and gender norms.

The historical or mythological characters at the centre of certain films (Saint Agatha, Bernadette Soubirous) are revisited, becoming figures that defy generally accepted ideas and stereotypes, while exposing the viewer to borderline states that derail our understanding of norms and good taste.
The exhibition at the Crac is a chance to plunge deep into Pauline Curnier Jardin’s universe of plastic works and films. It is the artist’s largest exhibition to date in France.

Several installations were tailor-made for the Crac Occitanie’s spaces, making it possible to discover films, drawings and images within a reconstructed Roman amphitheatre, inside a giant placenta, in an archaeological diorama, or passing between the legs of a giantess.
At the beginning of the exhibition we encounter a monumental installation entitled Fat to Ashes, which was first presented in 2021 at the Hamburger Bahnhof (Berlin) after Pauline Curnier Jardin won the Preis der Nationalgalerie. The Crac is presenting the second iteration of this installation. A reconstruction of a Roman amphitheatre serves both as sculptural scenery and as a cinematographic apparatus in which the film of the same name Fat to Ashes is screened. This title refers to Mardi Gras and to Ash Wednesday, that is to say the transition towards the beginning of fasting and abstinence on the Christian calendar.

In contrast with Ash Wednesday, Mardi Gras is a day of collective exertion and release marked by a carnival.
Pauline Curnier Jardin’s film is a montage of sequences filmed in Super 8, interweaving several stories: processions linked to the martyr Saint Agatha of Sicily in Italy, a carnival in Cologne, Germany, and the pig slaughter, a rural collective ritual that has lasted since Antiquity, consisting in slaughtering and preparing a pig to eat at the coldest time of the year. The interweaving of these different elements produces the effect of a trance of sight and sound in which exertion, excess, and physical or spiritual ecstasy are closely mixed. 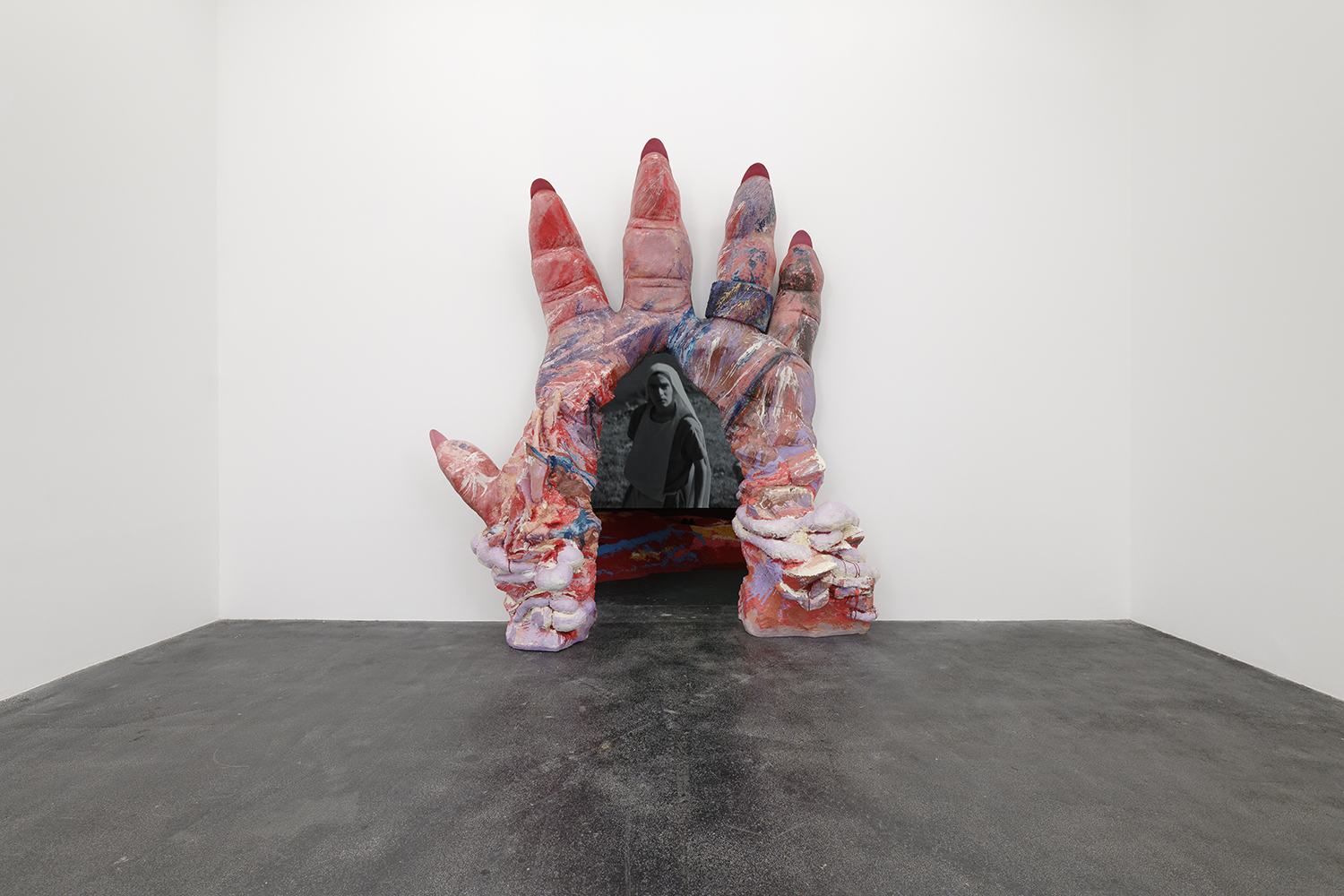 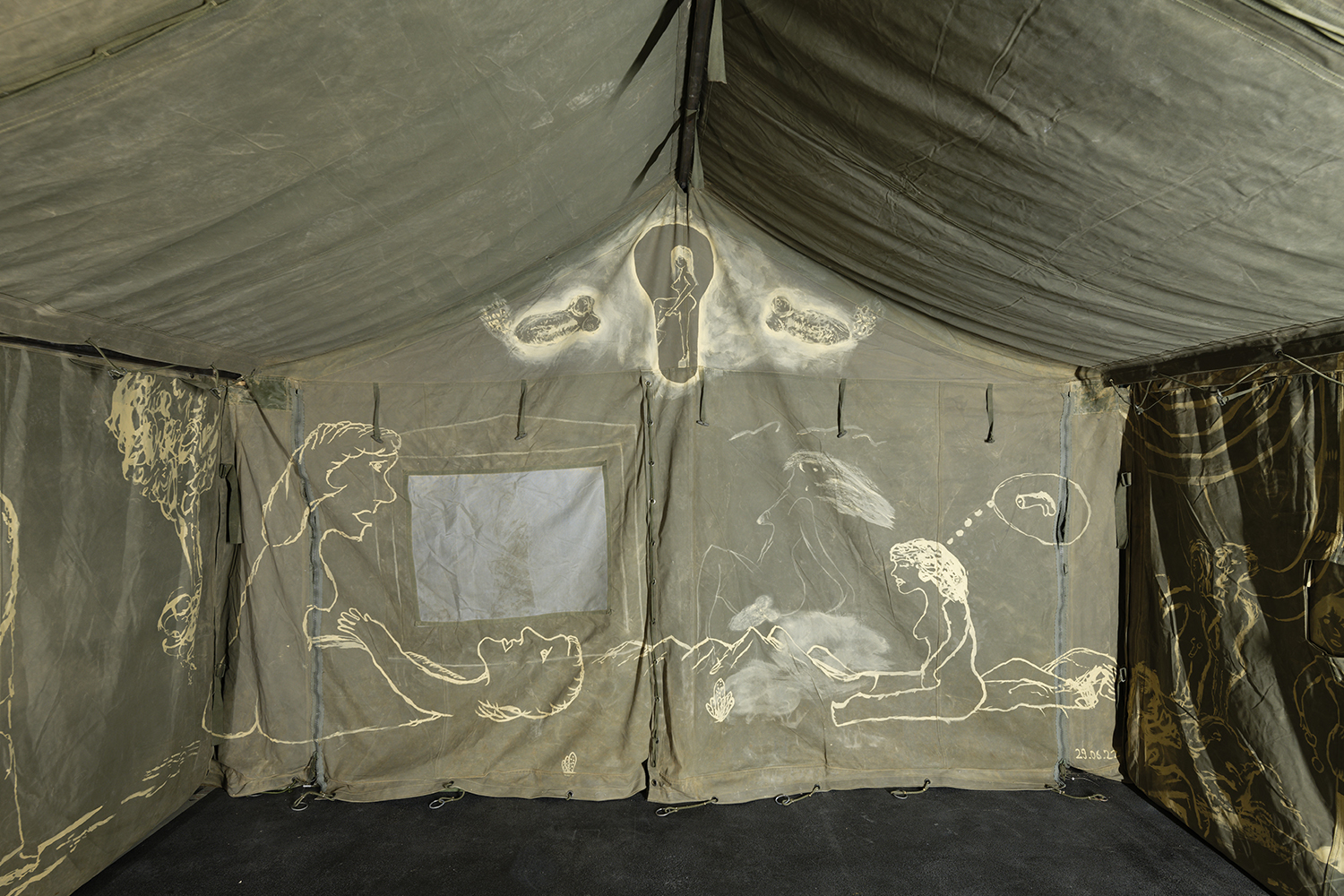 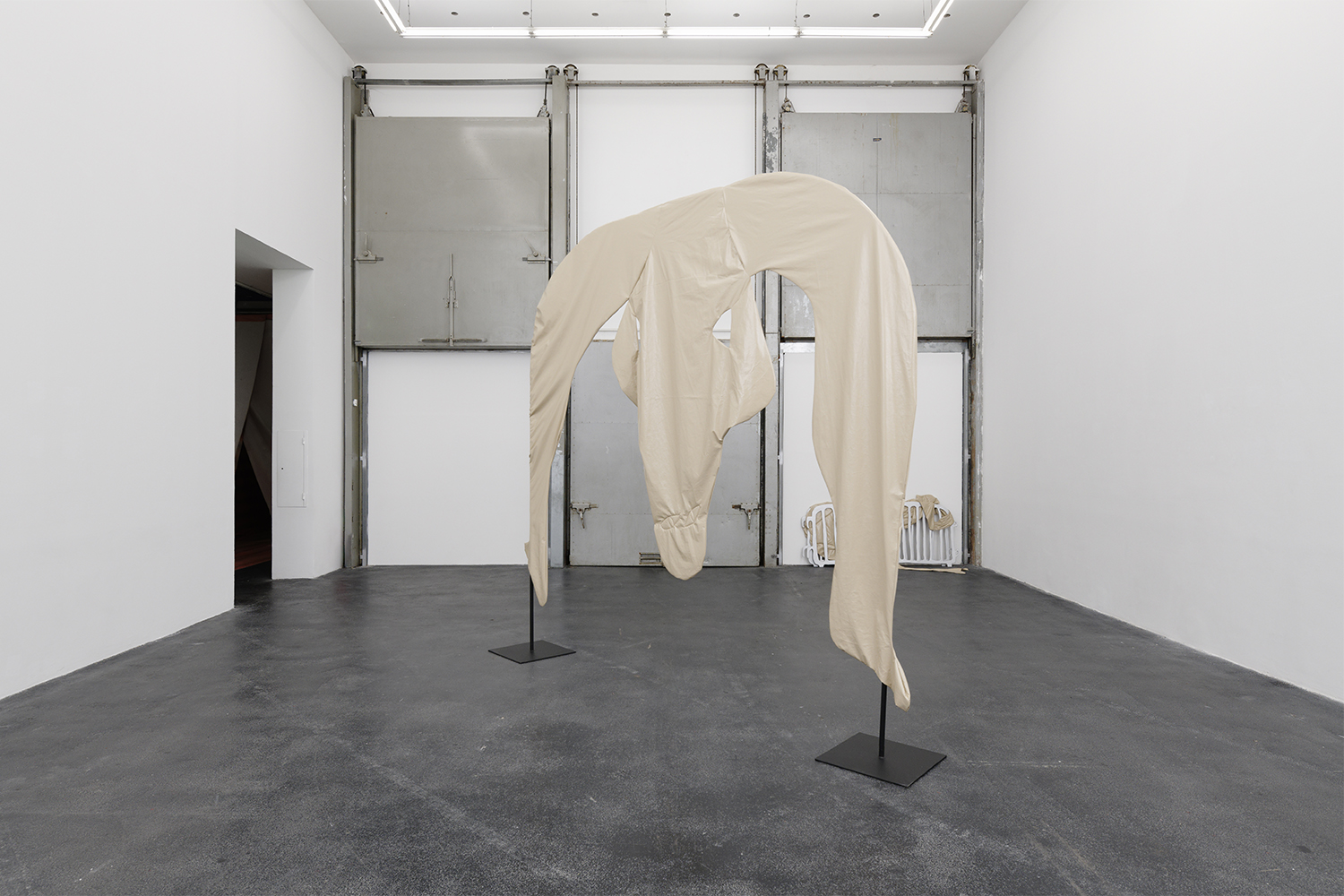 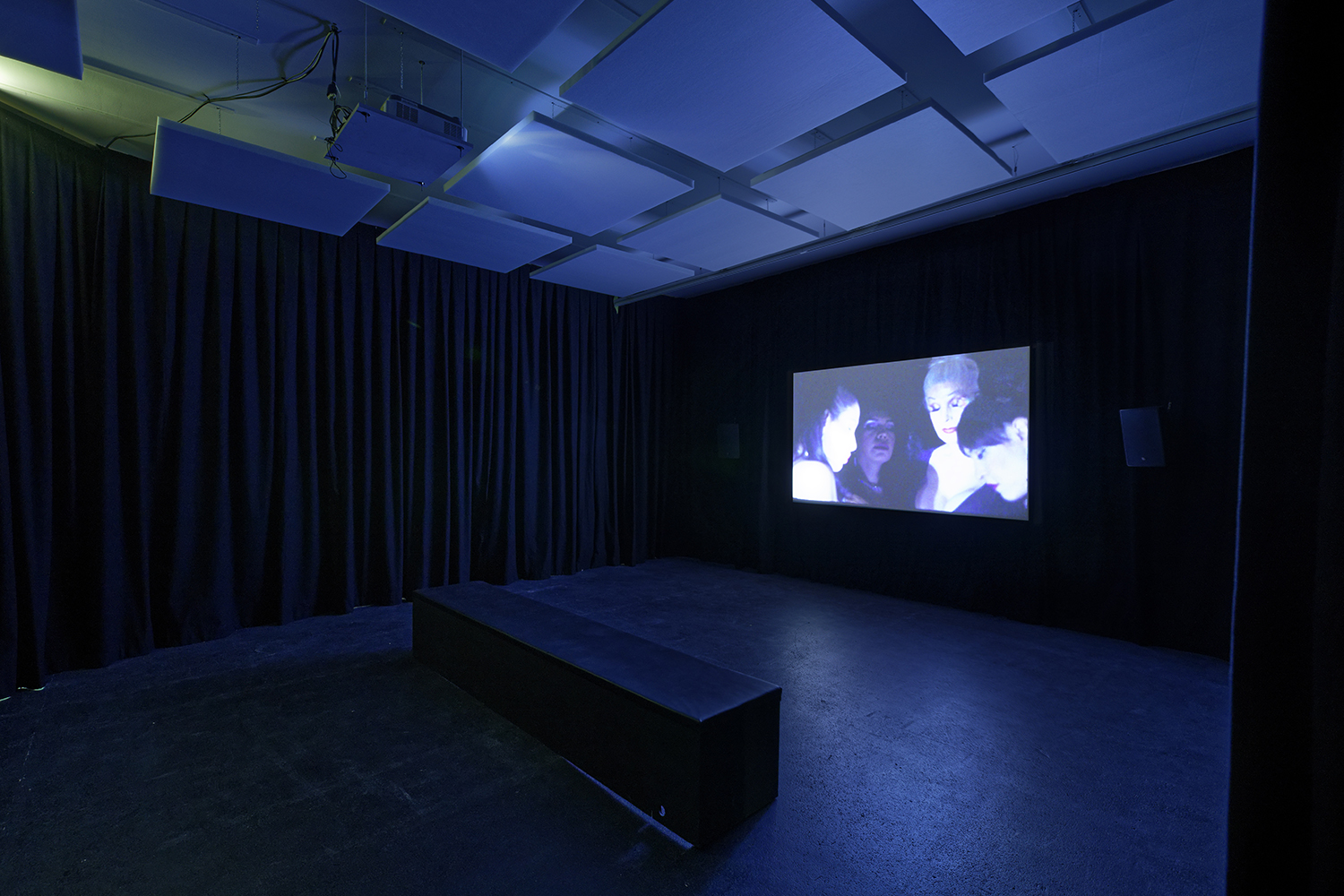 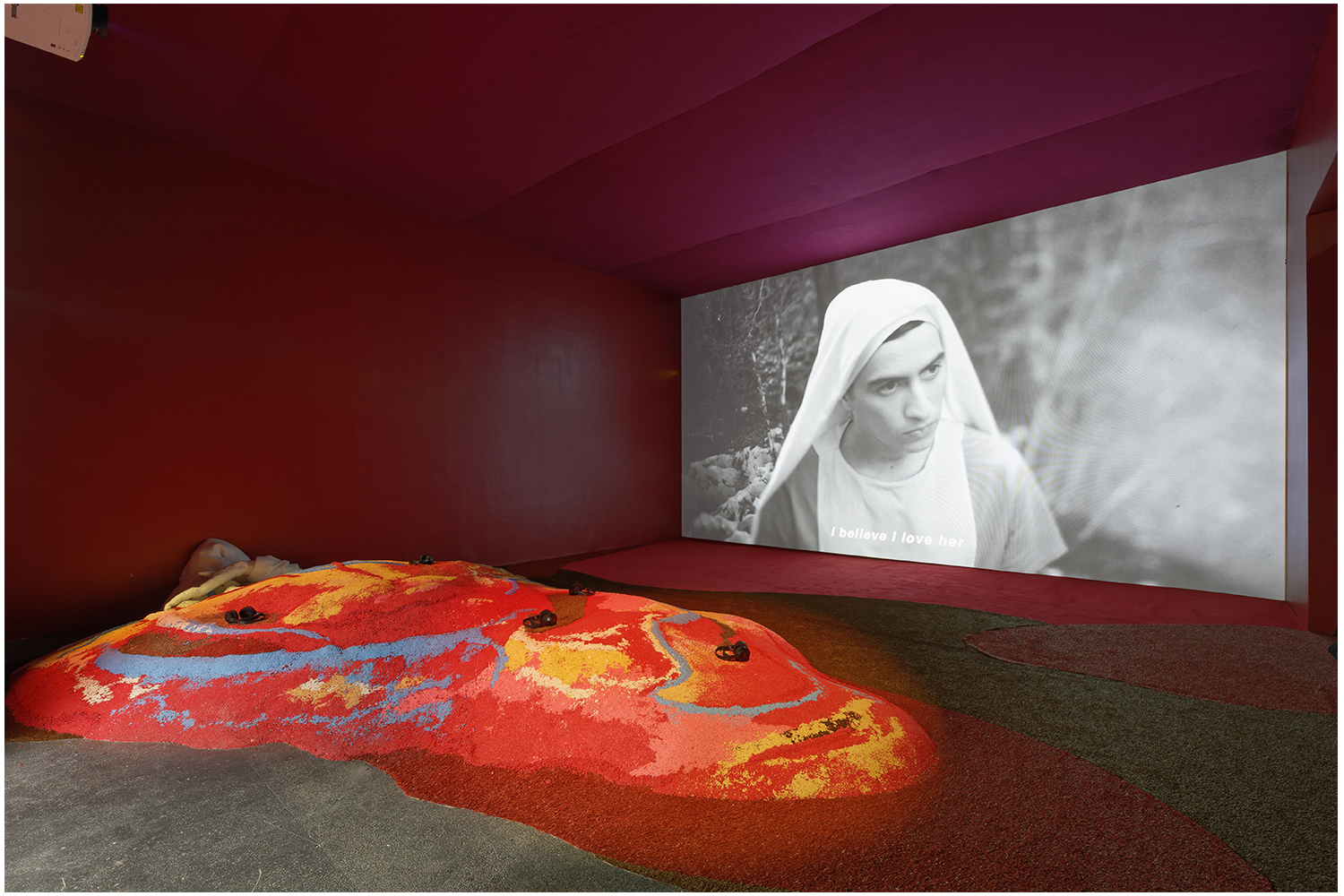 The amphitheatre that serves as a stage for these images is supposed to evoke a popular entertainment site no less than a sacrificial space, a collective outlet for taboos and repressed desires. The reconstruction of a structure emblematic of Rome (where the artist lives) and of different cities of the Empire such as Arles or Nîmes (where the artist grew up) was inspired by certain Italian culinary traditions that recreate the shape of an amphitheatre to create pastry follies. Pauline Curnier Jardin builds her own trickling architectural folly that is not just a site of gluttony, but also an ancient theatrical stage and an anatomical theatre of the kind that appeared in southern Europe in the 16th century, in which the human body was studied and dissected.

Next in the exhibition is another recent project by Pauline Curnier Jardin, initiated during her residency at the Villa Médicis in 2019 and 2020. In the context of the 2020 lockdown and an experience of absolute restriction of the body, she initiated a long-term collaboration with a collective of Colombian sex workers she met in Rome, with whom she has since created the Feel Good Cooperative. Pauline Curnier Jardin established a series of workshops with these women, and for the price of a trick, she commissioned drawings from them, in which they depict work scenes. All proceeds from the sale of works are shared among all members of the cooperative, with a view to providing social assistance during the pandemic. The drawings have been shown in several exhibitions since 2020, and are being presented at the Crac in a new setup produced for the occasion.

With the cooperative, Pauline Curnier Jardin created a film entitled Lucciole (Fireflies). It presents this same group of women in the night, in a twinkling of shadows and lights along roadsides, in the fields on the edge of Rome where they usually work. Fireflies are those women who appear at night, made invisible in the day, rendered extremely financially vulnerable during the pandemic, and lacking all social recognition.

In a 1975 article, filmmaker and author Pier Paolo Pasolini deplored the “disappearance of the fireflies”, as part of an ecological disaster that he examined in light of all-powerful capitalism, which turns everything into an object of consumption. By revisiting the symbolism of fireflies, Pauline Curnier Jardin reinjects the potential for life, collective pleasure, and magic at the very heart of the economic, political and ecological disaster.

Finally, the exhibition is a chance to present the revival of an installation created for the 2017 Venice Biennale, entitled Grotta Profunda Approfundita. An organic environment shaped like a placenta serves as a viewing chamber for the film of the same name, shot in 2011 following the artist’s residency at the Caza d’Oro in Le Mas d’Azil.

Grotta Profunda is a burlesque reinterpretation of the history of Bernadette Soubirous, who saw the Virgin Mary appear several times in a cave on the High Pyrenees, making Lourdes into the global site of worship and pilgrimage that we know today. Pauline Curnier Jardin constructed her own series of strange and extravagant visions in succession, including a monkey-siren, a spiderwoman, a walking hand… all of them chimera that seem to be produced by Bernadette’s unbridled imagination, who in the meantime has transformed into a gigantic eye… 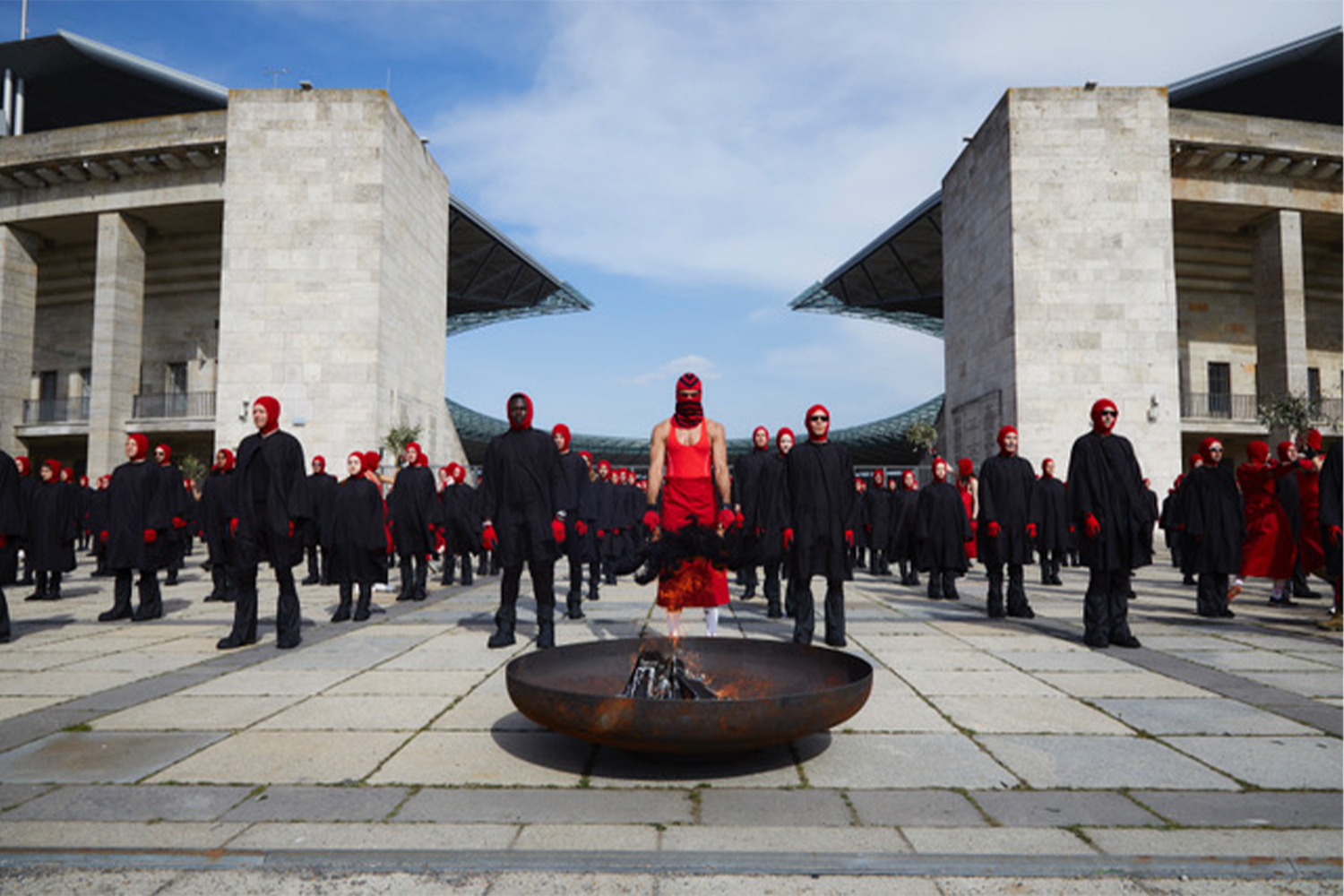