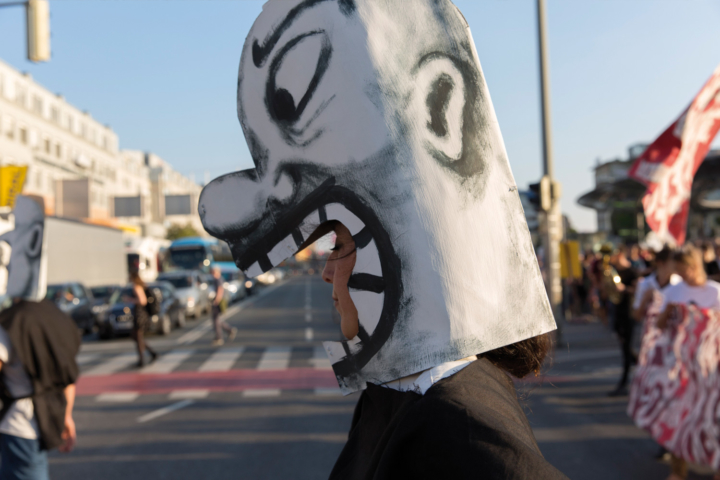 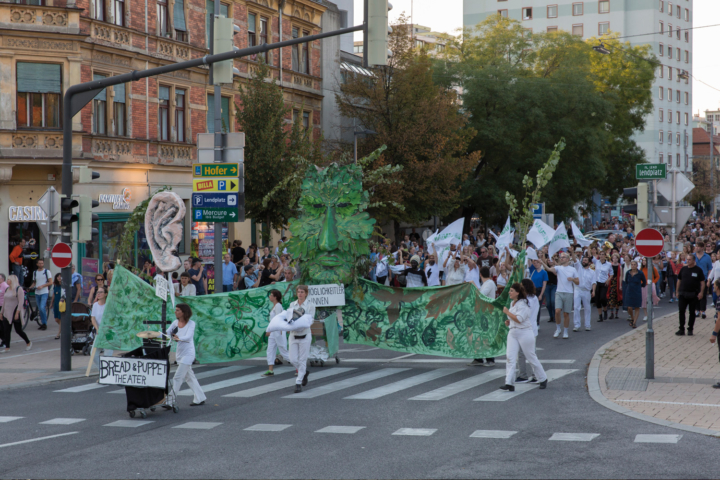 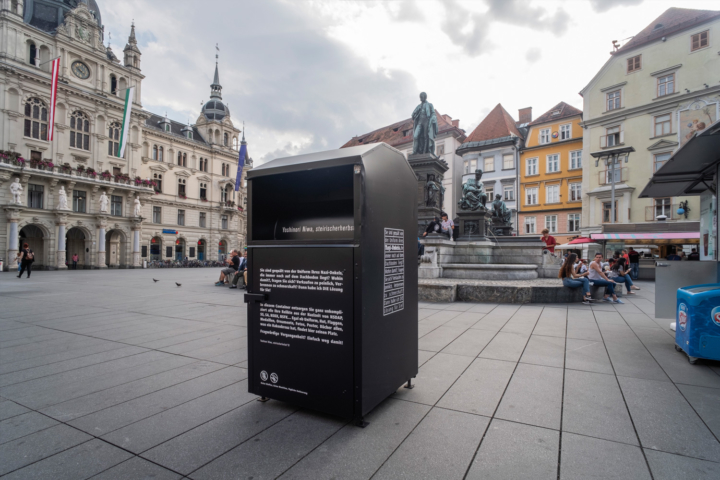 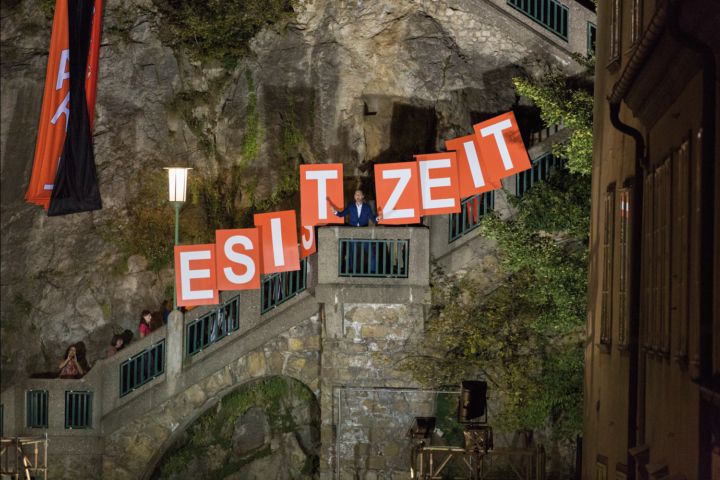 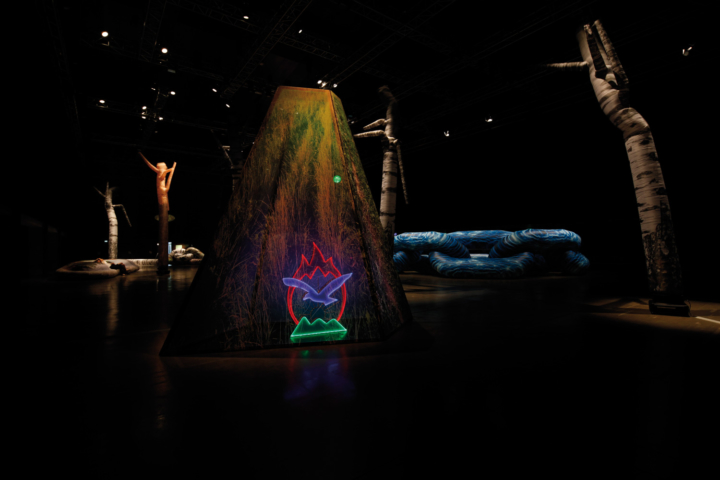 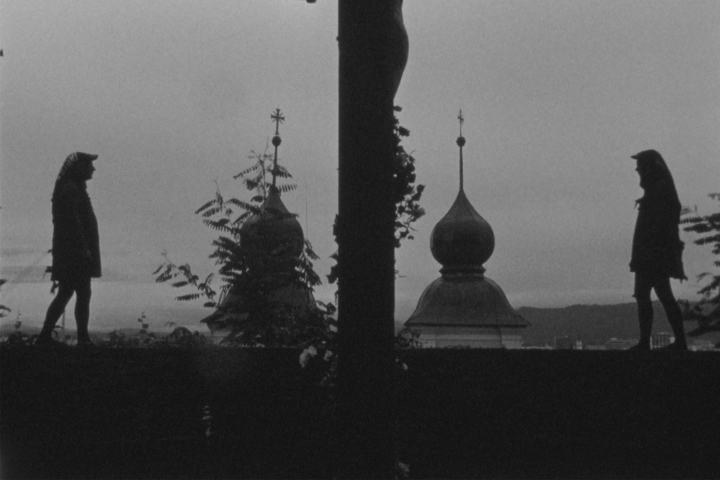 The Popular Front was a reckless attempt to unite different political forces in the 1930s against the rise of fascism. In order to create a more powerful image, it attracted not only politicians but international artists promoting socially responsible art. In the current wake of neoconservative tendencies, it has become common among curators to redefine the notion of “popular” in opposition to the idea of “national.”

Consider the exhibition “Political Populism” by Nicolaus Schafhausen (2016), which tried to progressively reappropriate ideological mechanisms used by the right. “Volksfronten,” led by the new director of steirischer herbst, Ekaterina Degot, goes one step further. Identifying with the aggressor, it launches an offensive attack on Graz’s actual urban fabric, and therefore reignites the festival’s spirit that was originally conceived in the late 1960s: to oppose the remnants of Styria’s fascist affinities.

One might suspect that making broad historical analogies, i.e. comparing historical Nazism with the current political climate in Austria, only serves to empower an “enemy.” For instance, it is not clear what the value of provocation is in Withdrawing Adolf Hitler from a Private Space (2018), in which artist Yoshinori Niwa disseminated printed material advertising a depository for Austrian memorabilia belonging to the fascist era. Such a negative gesture, reminiscent of a bonfire of the vanities, might only endow these mute historical objects with an almost animist omnipotence. However, if one were to abstain from such analogies, it could become easy to misrecognize potential future tribulations. To avoid both of these traps, theorist Boris Buden found an obvious solution. According to him, one should not treat the rise of neo-fascism as something serious, but should instead emphasize its intrinsic ridiculousness. Mikhail Bakhtin’s notion of “popular laughter” might generally describe the tactics employed by other participants who, freed from the oppression of eternal and immovable categories such as “nation” or “motherland,” were instead “exposed to the gay and free laughter of the world.”

In a more straightforward way, The Underneath the Above Parade #1 (2018) by Bread & Puppet Theater appropriated mystery plays from Medieval theater and organized processions through the streets of Graz during which fascist papier-mâché idols were loudly debunked. The parade felt like a pseudo-collective agency initiative, coming off as a rather passé nostalgia for the DIY participatory aesthetics of Fluxus. This idea of mass engagement was problematized in a more sophisticated way by Roman Osminkin in Putsch (2018), an adaptation of Dmitri Prigov’s conceptual poetry. Following a polarizing dialogue, amplified via two loudspeakers, between liberative revolt and Stalinist putsch, performers climbed the Castle Hill staircase and used lettered signs to reveal words from the script. The crowd was activated by extras screaming and laughing into megaphones in sympathy and antipathy. And amid this dichotomous “claque,” the idea of national unity was confronted by a multitude of individual, agonistic voices.

Irina Korina’s Schnee von Gestern (2018) and Kozek Hörlonski and Alexander Martinz’s “Demonic Screens” installation series (2017–18) appealed to the populist aesthetics of amusement parks and B-grade movies, respectively. Korina produced gigantic, pompous inflatables in the forms of chains, snowdrifts, and skydancers, appealing to the imagery of rodina, the Russian equivalent of homeland as a patriotic construct taught to school children. Soft and hollow, the sculptures undo their own monumentality. Printed patterns of birch trees turn out to be commercial advertising upon closer inspection, and immaculate white snow is simply a decorative cover for the dirt beneath. In their installation and film series, the Austrian duo produced what they call “Heimat horror,” oversaturated suspense on the verge of slapstick. The idyllic landscapes of Styria and Carinthia are populated by parodic zombies, a Lynchian doppelgänger, and mechanized puppets. In both cases, Heimat, the romantic notion of homeland as a guarantor of immutability and belonging, was flipped inside out, while the infamous racist slogan “Blut und Boden” was taken quite literally, spelled out in artificial blood and dirty snow.

If the previous works problematized outward engagement and entertainment, others referenced an interpellated address of the individual. In The Iran Conference (2018), a play staged in the form of a university symposium, Ivan Vyrypaev dissects liberal, pseudo-scientific discourses on the “other” through the figure of an imaginary Iranian. Themes on Jordan Peterson’s biological determinism, the optimist proselytism of TEDx, and UN peacekeeping were presented by professors, journalists, and other conference participants. The result was a series of irrelevant detours and disputes. Over the span of the symposium, several Western speakers covered a far-flung range of topics, and a talk by Shirin Shirazi, the only Iranian woman in the program, was postponed until the very end.

In a new adaptation of his 2010 work Hilarious, Roee Rosen transform a stand-up comedy routine into an embarrassing participatory exercise. Actress Hani Furstenberg performed in front of a screen that indicated when the audience should laugh or applaud. Through Furstenberg’s queasy jokes and vulgar quips verging on hate speech, Rosen exposed a double standard: a hypocrisy hidden beneath notions of human rights, multiculturalism, and political correctness. If The Iran Conference functioned as a mirror, parodying the alleged internationalism of the art crowd, the latter lifted it to a meta-level in which the artist must take the role of the oppressor. Part funny, part unbearable, the Rabelaisian laughter of Bakhtin’s “grotesque realism” was here liberated not only from external censorship, but more importantly from our own interiorized sense of decorum.