Dan Bodan spent November 8 to December 8 in residence at the Goethe Institute in Tehran. Flash Art invited him to write a travelogue during his time there. This is the fifth installment.

“Hey, why does everyone say спасибо instead of Дякую?” I ask him after the waitress brings us two steaming bowls of borscht and a plate of raw spring onion and salo (cured slices of pure pig fat). These words mean “Thank you” in Russian and Ukrainian respectively.

I have no idea what part of the city we’re in anymore. A driver brought us here and I’ve given up on trying to find my bearings in Kyiv. It’s been a week of marathon drinking and fashion events, and I’ve been shuttled around from place to place in a van with darkened windows so I’m feeling pretty discombobulated. I know we were just at a palace. And I don’t remember crossing the river. So I guess we’re still on the south bank? If that’s even what they call it.

This is the longest we’ve been together alone and sober, and the first time we’ve attempted an extended conversation without the aid of one of his ubiquitous model-friends functioning as our unwitting translator. It’s been previously explained to me that he had a traumatic experience with a particularly volatile English teacher in his childhood, which stunted his learning. I believe it; I watch the suffering on his face as he tries to string together the right words to form a sentence. I also realize that this is the first time I’ve directly asked him about the relationship between Russia and Ukraine.

“Many Russians in Kyiv. In Ukraine.” He finally spits out.
“Me — I am, mmmm…” he struggles again.
“You’re Russian?”
“…mmmm part.” He’s looking me in the eye intensely like he’s trying to pass on information telepathically. I think he’d like to elaborate but we’ve reached the extent of our common language skills.

Sadly, we don’t have ESP.

A little defeated, he retreats back into his phone to catch up with the constant flow of incoming text messages. He’s a popular guy and tries his best to take care of everyone. I fill the silence by speaking enthusiastically about nothing in particular and laughing at my own jokes, a special skill I’ve developed by living alone for six years.

It’s been almost a year since I left him in a taxi on a corner in Paris, and we’ve had very little communication since. A couple of messages here and there, a few interactions on social media. I have no idea what’s happened to him during this time, and as far as I know he hasn’t kept tabs on me. And yet we seem to have picked up pretty much exactly where we left off. Time folds and two chapters from either end of a book suddenly come one right after another. We’re still very much strangers, and in many ways I’m projecting all my desires onto him in a way that is probably unfair and unrealistic, but we’re familiar and comfortable in each other’s company, even when silent. Being around him calms me down.

A few days earlier he’s invited me to his friend’s wedding, or rather the after-party, in the empty hall of a new museum constructed to reflect the architectural vernacular of prewar Europe, only with cheaper materials: hollow granite, plastic marble, drywall interiors. It’s become a popular style in recent years and I can’t help but draw some line between the emergence of a Disneyworld neoclassicism in our capital cities and the rise of a weird retro-futurism in international politics.

He wants to make out and he’s relentless.

He demands an intimacy from me in a way I’ve never experienced from another guy before. He doesn’t seem to have a filter through which to express his affection. He adores dogs, and I’ve observed the way he interacts with them; it’s not entirely dissimilar to the way he handles me, simultaneously trying to calm and conquer. To soothe his way into my space until I’m comfortable enough for a mutual embrace. To have me on my back as though it were my choice. He bulldozes my expectations of how men are supposed to touch one another — a difficult thing to write when I reflect on how I’ve been treated in the past, and, more worryingly, how I may have treated others.

Do you remember the last time I held you before we lost our love? I’m not sure I can. I remember one night when I couldn’t sleep and was tossing and turning until you gently grabbed my arm and folded my body into yours with a tenderness that surprised me so much that I passed out almost instantly. I remember when you punched my rib and told me you hoped my flight later that day would crash, and I remember discovering the bruise while showering at the hotel that night. I Remember when I finally hit you back at a crowded bar and people applauded me and declared me the winner, not because good had triumphed but because cruelty is far more entertaining and it confirmed their expectations of how men should communicate: assured mutual destruction.

And I remember the last time we tried to have sex, and instead of making new love the old simply melted off of our bodies and onto the dirty sheets around us like oil absorbing into a paper towel. Congealing and staining and finally being crumpled up and tossed away.

But the details of our stories fade with time.

He’s literally ripping apart my face with his stubble. At one point I have to hold his arms behind his back just to keep up a conversation with the other guests at the party.

Eventually he wrestles free and turns and says, “Hey, Hey! I love you. I love you.” And starts to kiss me again.

His eyes are almost closed and he’s so wasted he can barely hold himself up straight. I’m not sure he’s really aware of what he’s saying, so I smile noncommittally and say, “Yeah, I love you too,” and let him destroy my face again while I process the sentence over and over in my mind. The last boy to tell me he loved me would leave me with a bruised body and a broken spirit within the course of a year, so, drunk talk or no, it’s a complicated thing to hear. At one point he goes to find a cigarette and I quickly Google Ukrainian translations for love. There are two apparently. Любов (platonic) and Кохання (romantic). When he returns I consider asking him to say it in Ukrainian so I can get a better grasp of what he meant, but I decide that would be a dick move and, anyways, I wouldn’t know how to respond to either.

He finally relinquishes my mouth for a moment while he takes a short nap on the steps outside the main hall. When I make a move to go to the bar he grabs my arm tightly and wheezes, “No, stay!” and pulls my head down to rest on his chest. I can hear his heavy heartbeat while Ukrainian techno plays in the background and the Dnieper River expands out below us under a cloudless sky freckled with white stars. With my temple on his chest and my eyes toward the moon I attempt a prayer. 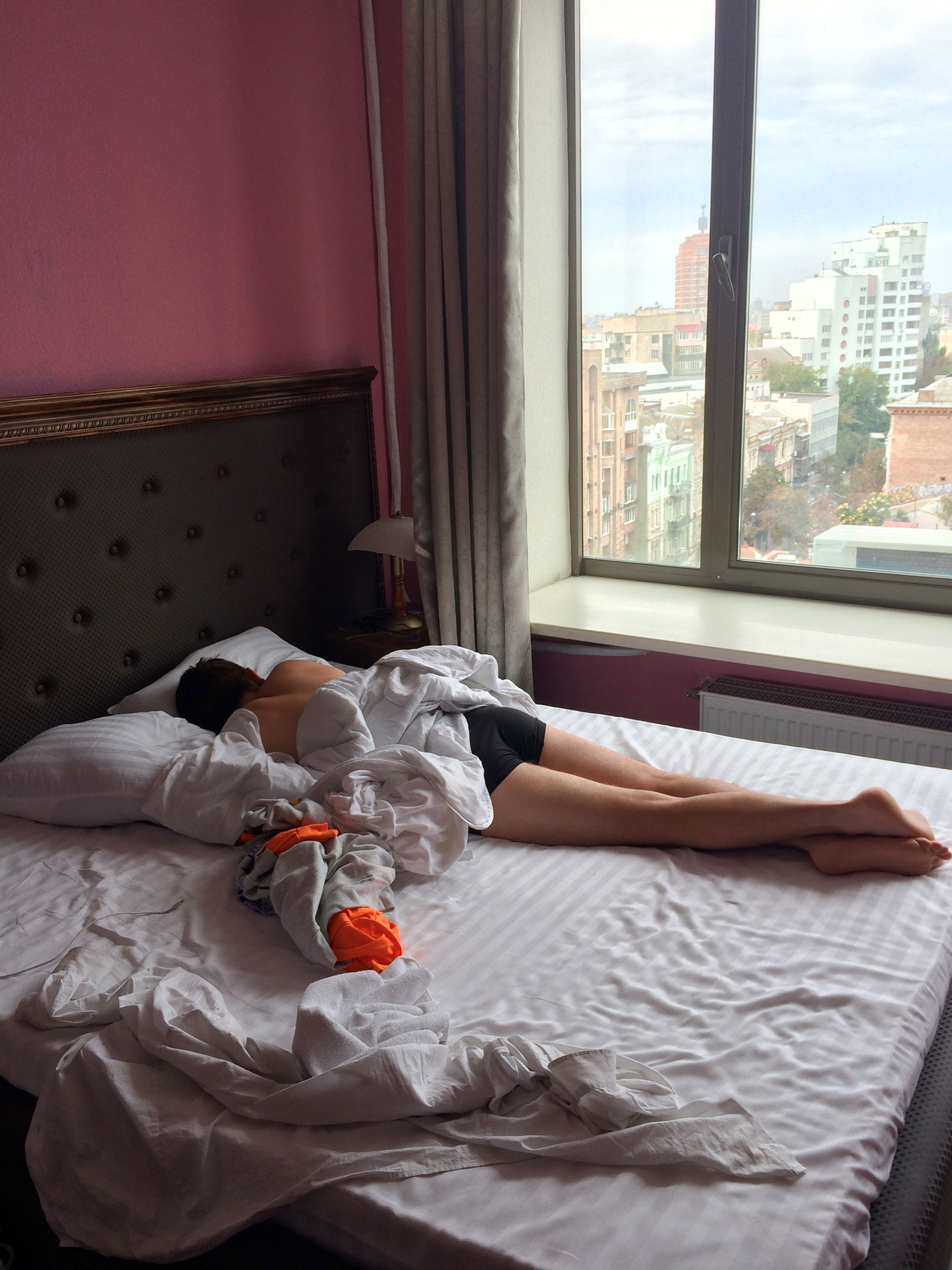 Dan Bodan spent November 8 to December 8 in residence at the Goethe Institute in Tehran. Flash Art invited him to write…