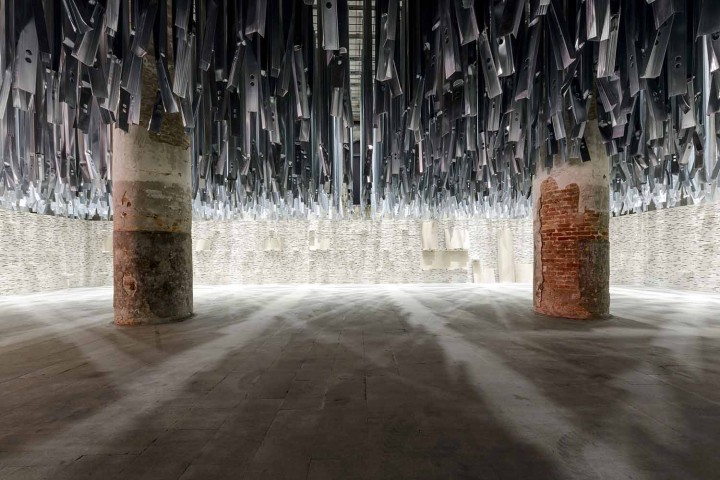 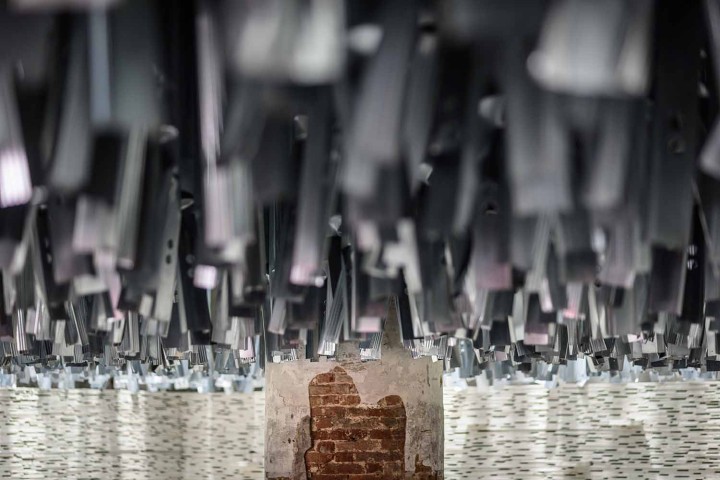 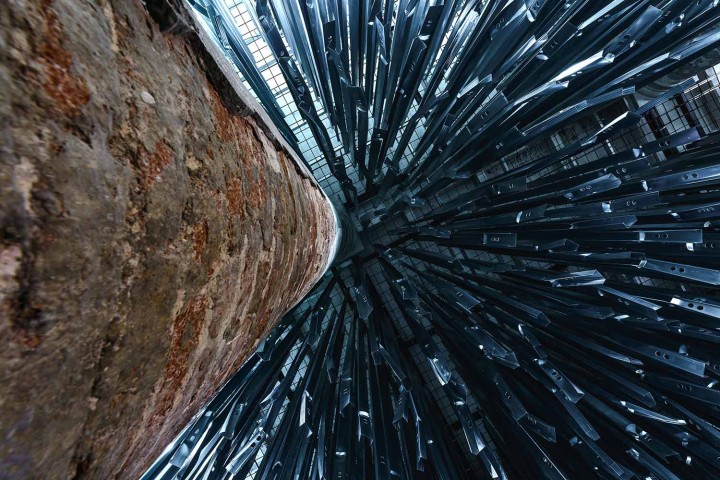 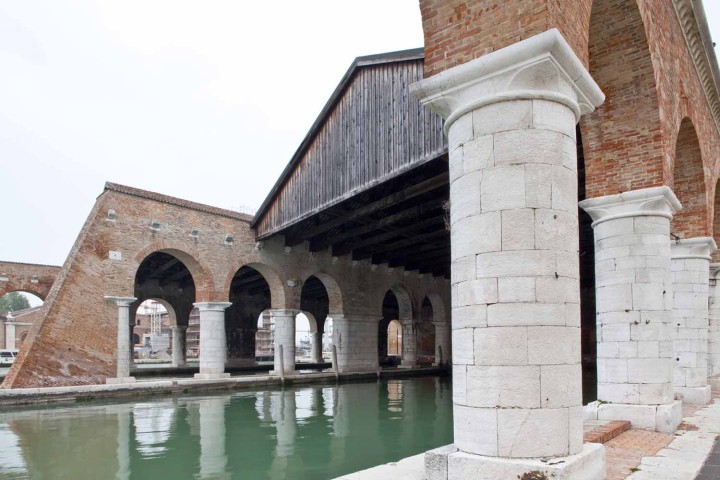 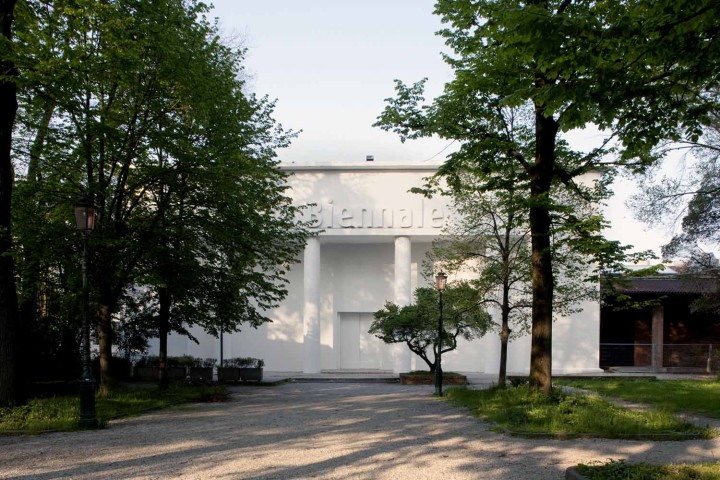 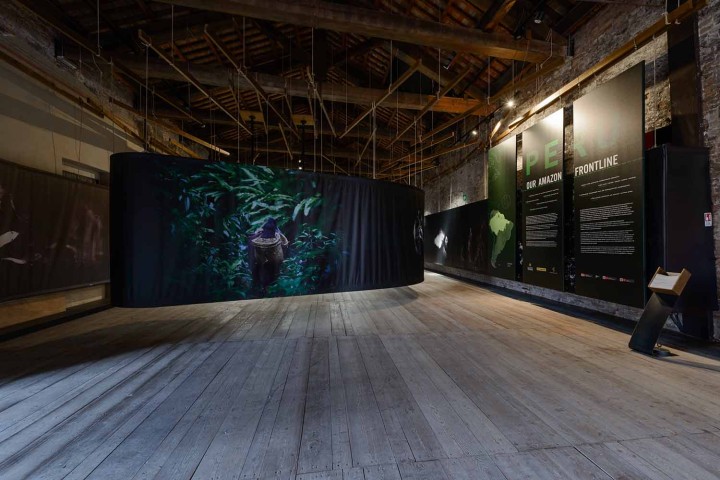 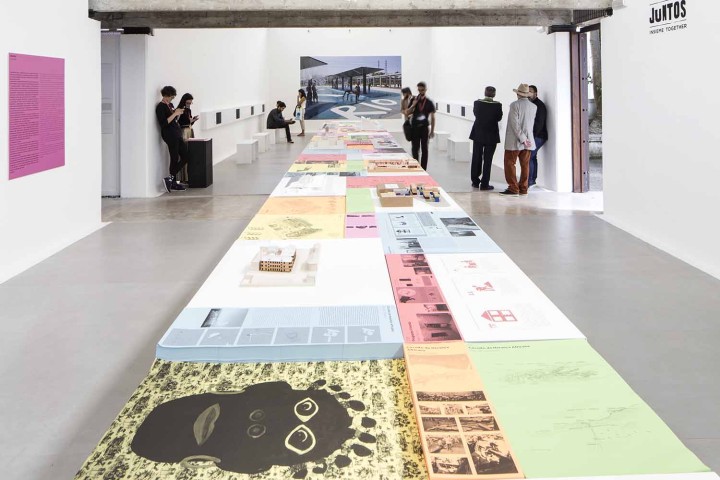 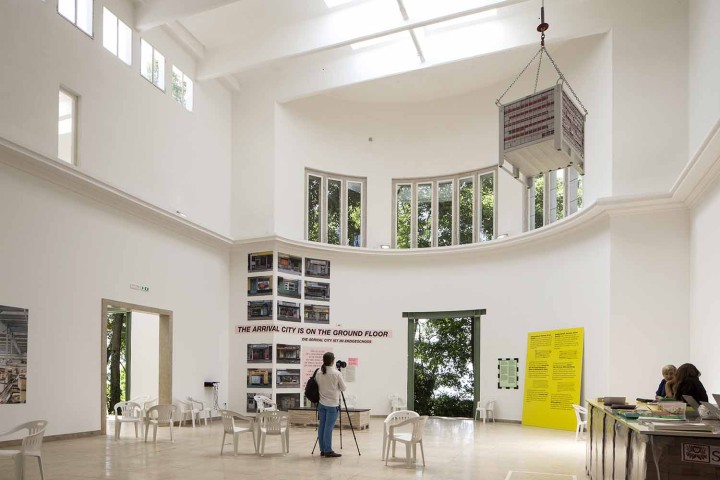 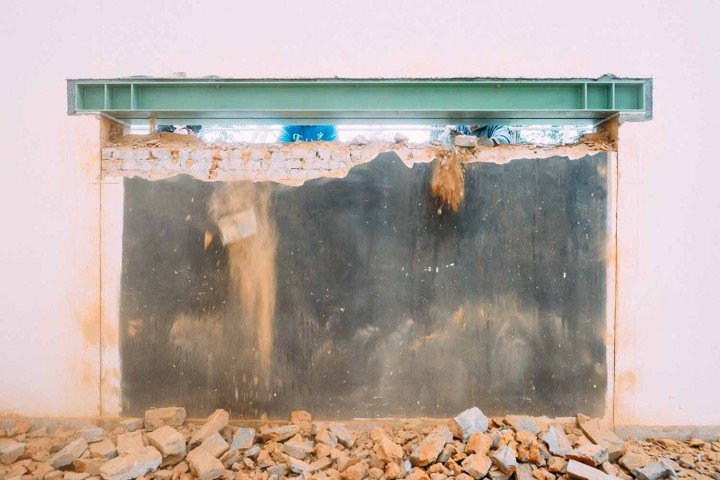 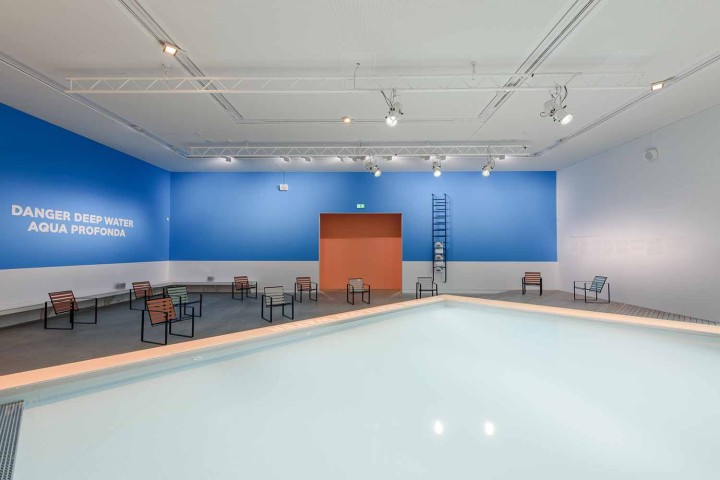 The theme of this year’s Architecture Biennale, “Reporting from the Front,” focuses on the tangible effects architects can have on human and ecological crises — first and foremost the plight of people displaced by war and economic collapse.

The exhibition in the German pavilion, “Making Heimat. Germany, Arrival Country,” is one of its highlights. To epitomize the nation’s open-border policy and welcoming of over one million refugees in 2015, four large sections of the walls of the historic building have been removed for the duration of the Biennale, making it the only exhibit that will stay open at all times. The designers of this year’s exhibition, Julian Schubert, Elena Schuetz and Leonard Streich, founding partners of the young Berlin-based architectural practice Something Fantastic, focus on rapidly changing urban environments and on communal housing. Alongside Frankfurt’s Deutsches Architekturmuseum (DAM), curator Oliver Elser, project coordinator Anna Scheuermann and author Doug Saunders, they reflect on a comprehensive checklist of conditions necessary for the growth of neighborhoods where immigrants can thrive as actual citizens and not merely temporary guests. The lessons derived from Saunders’s painstakingly researched book, Arrival City: How the Largest Migration in History is Reshaping Our World (2011), are clear: the key prerequisites for a successful integration process are affordable and high-quality housing, access to work, small-scale commercial spaces, good access to public transit, networks of immigrants from the same culture and a tolerant attitude that extends to the acceptance of informal practices.

Several projects address the global housing shortage and its underlying concerns, including urban decay (of note is Inês Lobo’s research on this theme for her project “Mosque in Mouraria” in Lisbon), unaffordability and gentrification. Anupama Kundoo and her practice strive to design spaces that are durable and humane as well as affordable. In her workshop “Life Afterlife” with local students of the faculty of architecture, she examined themes of urban obsolescence and the possibility of upcycling waste, including waste produced by the Biennale itself. The effect of unrelenting gentrification over the lives of some of London’s more vulnerable citizens is explored in the “@Gaybar” project. In collaboration with Daata Edition and Zuecca Projects, artists Hannah Quinlan and Rosie Hastings display “Gentrification,” part of a series that seeks to “rematerialize historic gay bars as containers for queer discourse.” Set in the Bauer Hotel’s ground floor foyer, the exhibition features six videos of empty gay establishments and soundscapes.

Transitory, public and shared spaces across cities and macro-regions are explored throughout the Biennale. Curated for the Australian Institute of Architects by Amelia Holliday and Isabelle Toland with urbanist Michelle Tabet, the arresting exhibition “From the Edge” presents the municipal pool as a vital public space in the culture and social life of the continent. Public pools, many of which are threatened by funding cuts, play a vital role in bridging barriers and bringing people and communities together. Personal and political identities are questioned and reframed in these oases of “everyday pleasures.” Elsewhere in the Brazilian Pavilion, one is reminded of the elegance, beauty and generosity of the public projects as well as the smaller domestic dwellings designed by Lina Bo Bardi. The farsighted Italian-born architect pioneered the incorporation of traditional building techniques and materials into the glass-and-concrete language of architectural modernism in Brazil, the country where she lived from 1946 until her death in 1992. The fine home she designed for Valeria P. Cirell in São Paulo (1958) has endured the whims of tropical weather thanks to its thick brick walls tied through lumber beams, its porches covered by dense shrubs. Bo Bardi’s larger multiuse spaces — the beautiful Museu de Arte de São Paulo (MASP) is one — are welcoming spaces for gathering and public life.

The vast range of activist thinking, research and social engagement on display at the Biennale reminded me of artist Anri Sala’s touching tribute to his friend Edi Rama, the former Mayor of Tirana and Prime Minister of Albania since 2013. The sixteen-minute color video projection with sound Dammi i Colori (2003), one of the works on view in a recent retrospective at the New Museum in New York, considers the attempts to affect the urban transformation of Tirana and reverse its fortunes; from a city where one was forced to live to one where one wanted to live.

This Biennale’s good intentions make its shortcomings all the more striking. One example: for his first public event, the curator Alejandro Aravena assembled an all-male-over-fifty-years-old-active-in-the-global-north panel to discuss the topic of infrastructure. That no women, no practitioners from the global south and no younger practitioners were invited as speakers belies such a lack of awareness, to the fact that the current system it purports to criticize is, in practice, flawed and systematically biased, that it defies belief. Better then to remember the wondrous Peruvian “Plan Selva,” a large-scale educational project in the Amazon region, and recall Lina Bo Bardi’s unflinching conviction that “the spirit of modern architecture” is to be shaped by “a love of humanity.”

The inaugural Cruising Pavilion sits an additional boat ride away from the main happenings of this year’s Venice Architecture Biennale,…