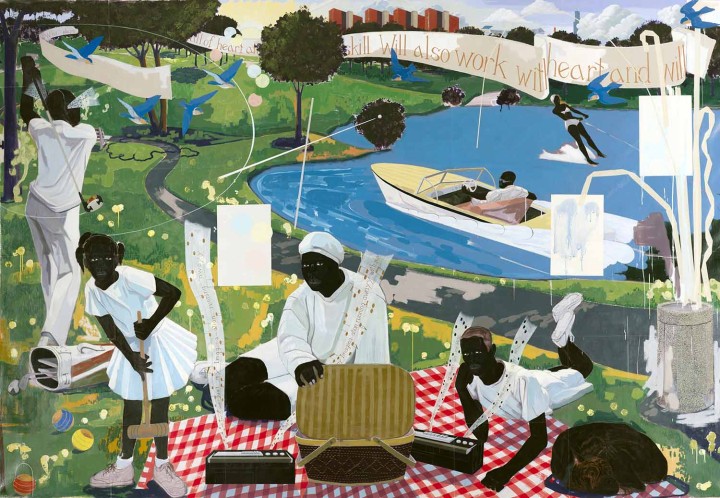 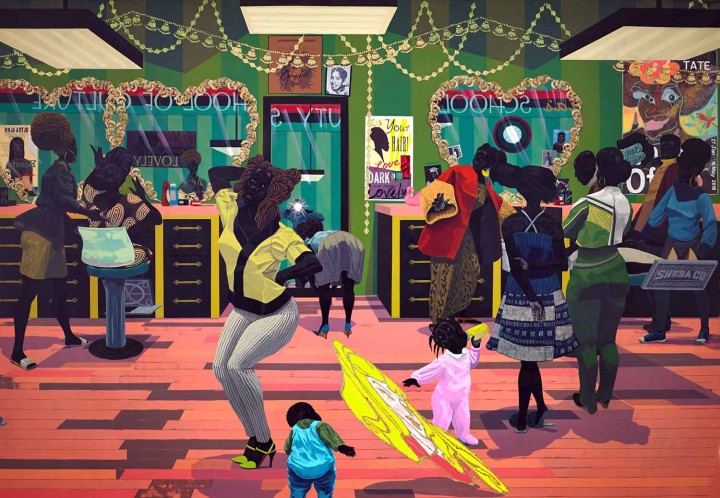 While Kerry James Marshall’s imitations of Old Master painting techniques to portray idealizations of black people’s lives are occasionally susceptible to the limitations of respectability politics, closer consideration proves these quotations of grandiose history painting and conventional portraiture to be not homage but détournement, subversions of the cultural schema by which excellence is determined and racism is perpetuated through exclusion and hurtful stereotypes.

School of Beauty, School of Culture (2012) is an alternative space to those traditions: an immense, opulent scene populated not with European royalty presiding over their courts, but a rich community of women occupying a hair salon. Many of Marshall’s more recent paintings celebrate self-possessed women of color defining their own sexualities and refuting narrow conceptions of desirability. The boldly black Wonder Woman in Black Star 2 (2012) has most recently starred on Lee Daniels’s hit TV drama Empire, a story full of similarly empowered black women and moguls.

For Marshall, paint is a material with which to contest the ominous and oppressive conditions associated with pervasive darkness even today. Invisible Man (1986) shows a nude black figure, his coloring hardly distinguishable from the ground plane against which he is rendered, and a hovering black censor block that fails to fully cover his low-hanging genitalia. Amid black-on-black geometries, this interloper jabs at the racism attached to early reductive abstractions, such as Alphonse Allais’s 1897 black square painting whose title translates to “Negroes Fighting in a Cellar at Night.” Black Painting (2003–06) is literally at home in total blackness, wherein two figures hold one another in a darkened bedroom, a copy of Angela Davis’s If They Come in the Morning lying nearby. Marshall does not simply reuse moves from painting’s canon, but rather inhabits and elevates precisely what has been historically discounted.

Belgian-born Dieter Roelstraete has been appointed the new Manilow Senior Curator at the Museum of Contemporary Art Chicago. He will…