The cape of St. George, formerly Cape Sepias, is in the promontory (in the shape of a hugging arm) of Magnesia in Greece, facing the island of Skiathos, the closest body of land in the Sporades Archipelago. It is believed, according to mythology, that the sea nymph Thetis oversaw the currents and mastered the waves from its caves. Between the Peninsula and the island there is a narrow passage through which three distinct currents push and pull the tides in various directions, and the speed of the Aegean Sea permits myriad movements of objects and myths. “As Mediterranean myths tell us, thinking about One is not thinking about All. These myths express communities,” Édouard Glissant writes, “each one innocently transparent for self and threateningly opaque for the other. They are functional, even if they take obscure or devious means.”1

The myth of Thetis appears in Madison Bycroft’s four-channel video installation Ruses and Refusals (Thetis) (2019), shown at Transmediale in Berlin earlier this year. Even though the title takes her name, the work does not speak about the Greek sea goddess but rather about the space around or through her. To put that in context, Bycroft’s approach when directing, performing, or writing revolves around more-or-less known historical figures (and certainly not only) that are presented in their absence or refusal. Julian of Norwich, the first (known) woman author to have written a book in English, shares room and voices with Buster Keaton, Diogenes, but also a satyr and a “very hungry lady” amid iconographies, rocky landscapes, and blobfish swimming around.

Bycroft’s kaleidoscopic work depends on complexity and plural significance, resisting linguistic representation and outlined descriptions. Born in Adelaide/Kaurna Yarta and now living on the coast of Marseille, Bycroft has been experimenting with the theatrical apparatus since childhood, more recently mingling dryly humorous agents via watery interrelationships and literary treasures.

Indeed, Bycroft’s strong grasp of language, literature, (marine) myth, and oral history establishes points of departure for these labored productions that are always manifold. The works do not look to a final destination or accomplishment but rather loiter precariously in the open seas, ready to be carried away by freely associated currents. Along the way, pop cultural references hop on, backed by clumsy sounds from trombones and horns, homophone exercises, echoes and repetitions, while the script itself becomes another character in the play. The alternation of unfinished stories and opaque narratives in the work resembles the capacities of the sea nymph Thetis to change forms and bodies (to escape from her prearranged marriage) and mark the desire of the artist to resist explicity and positivist identity politics, and to move toward what Jack Halberstam calls queer negation. 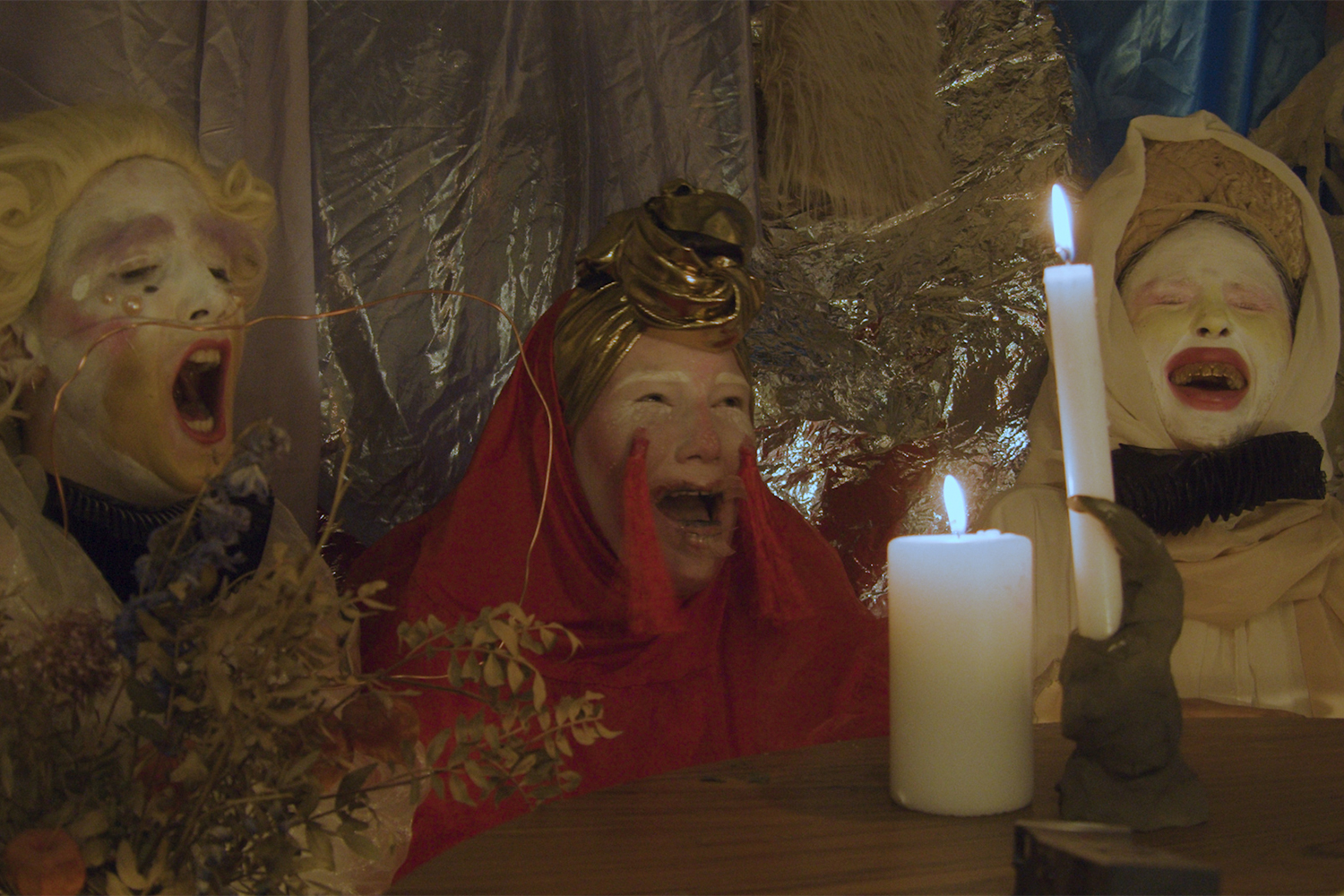 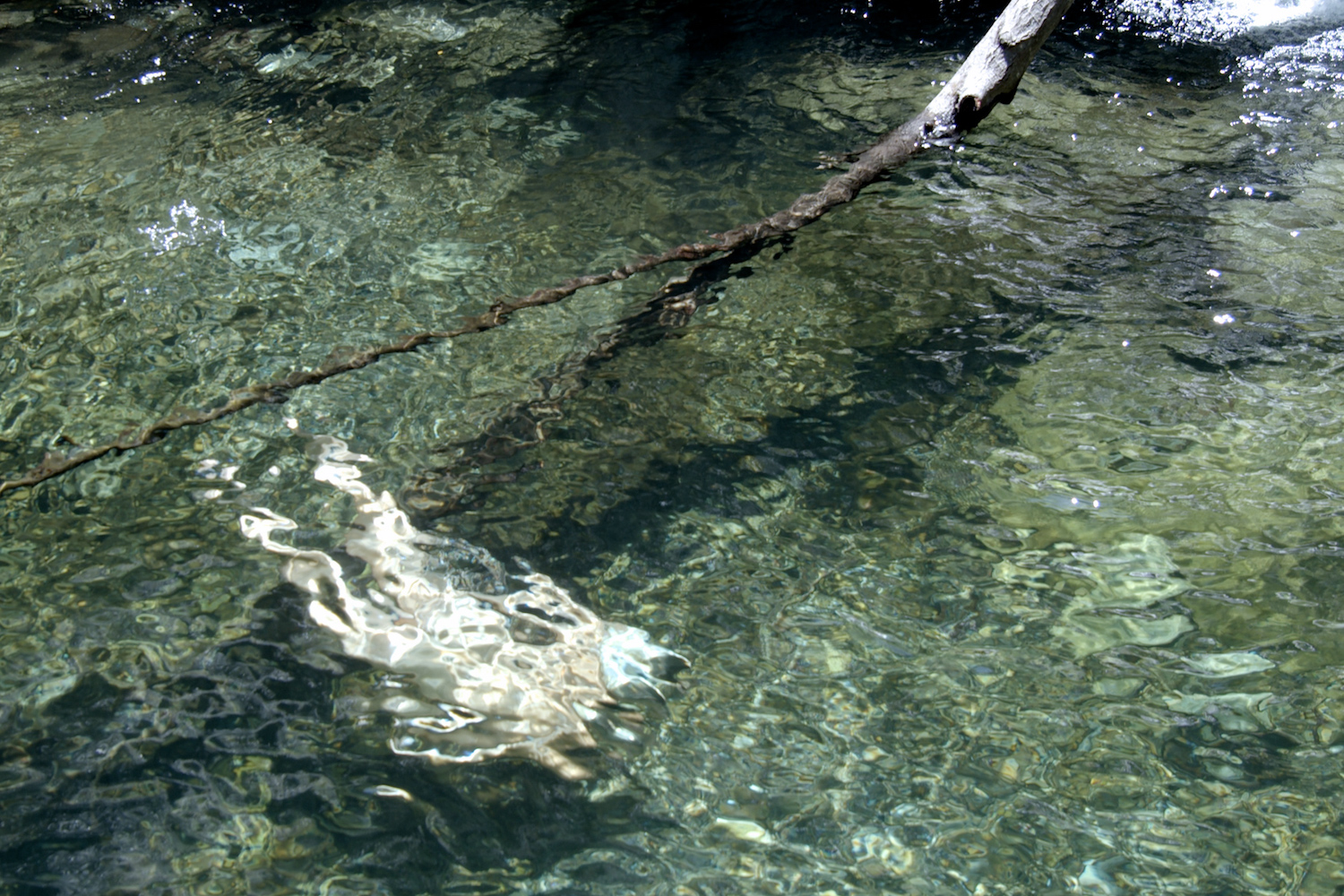 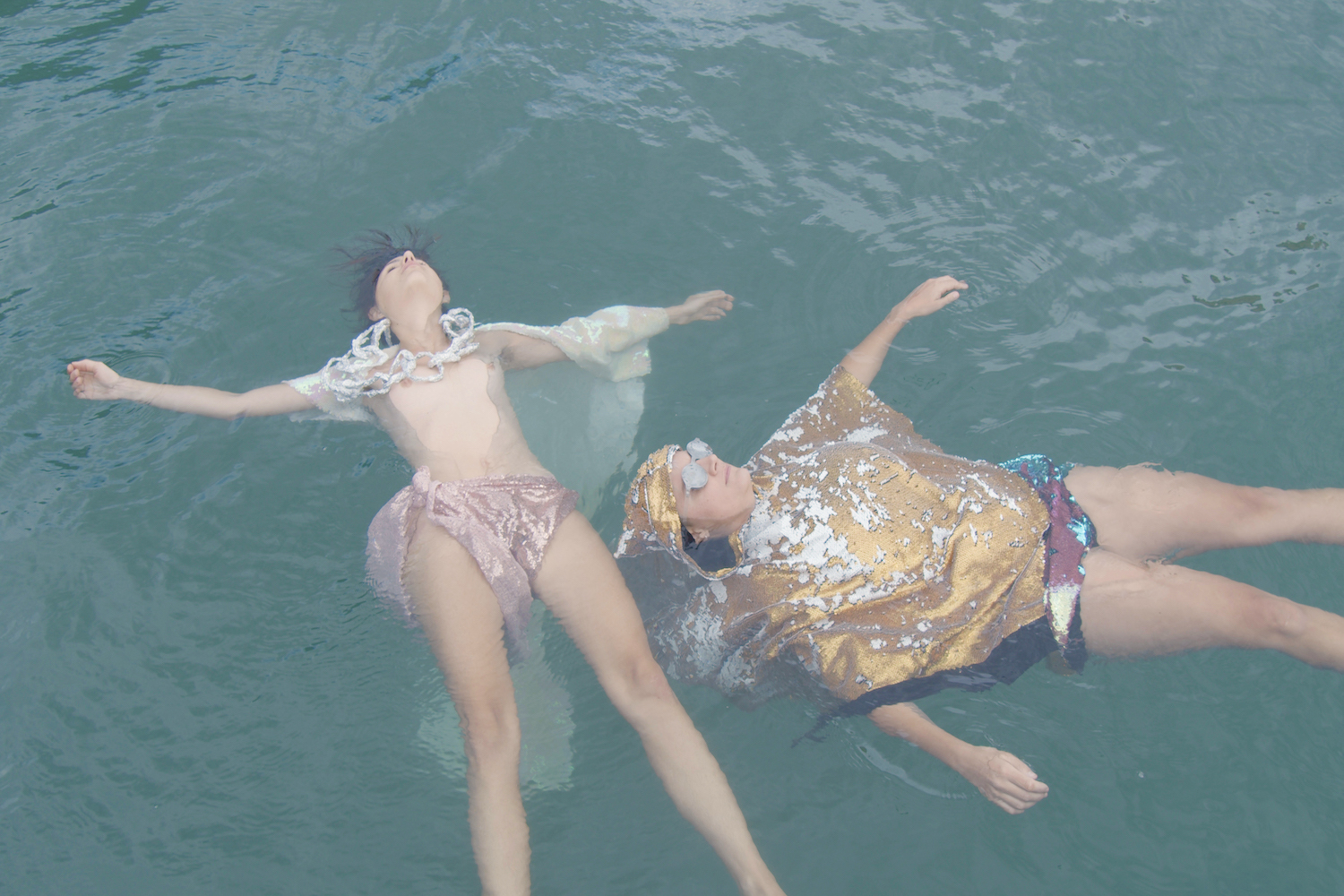 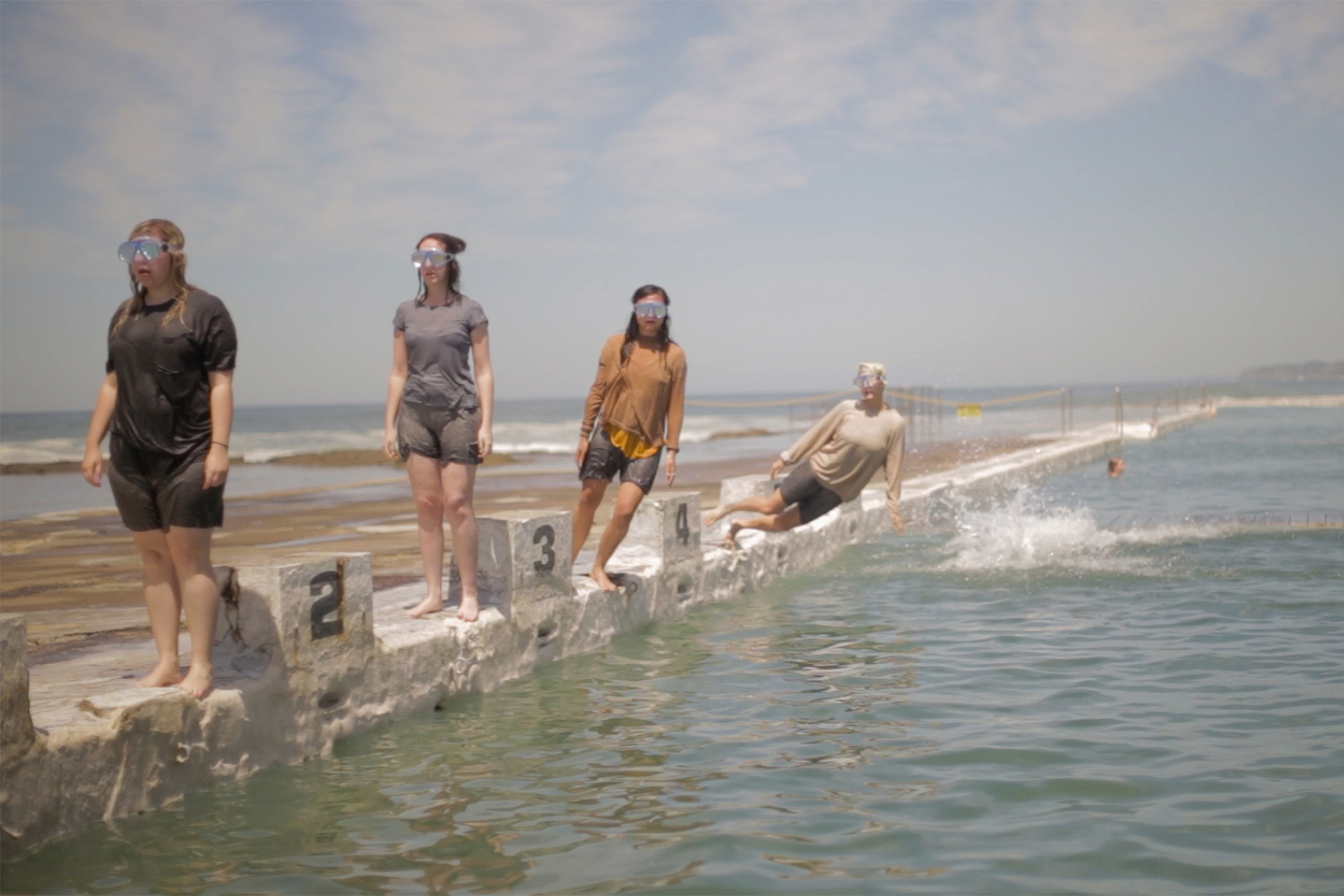 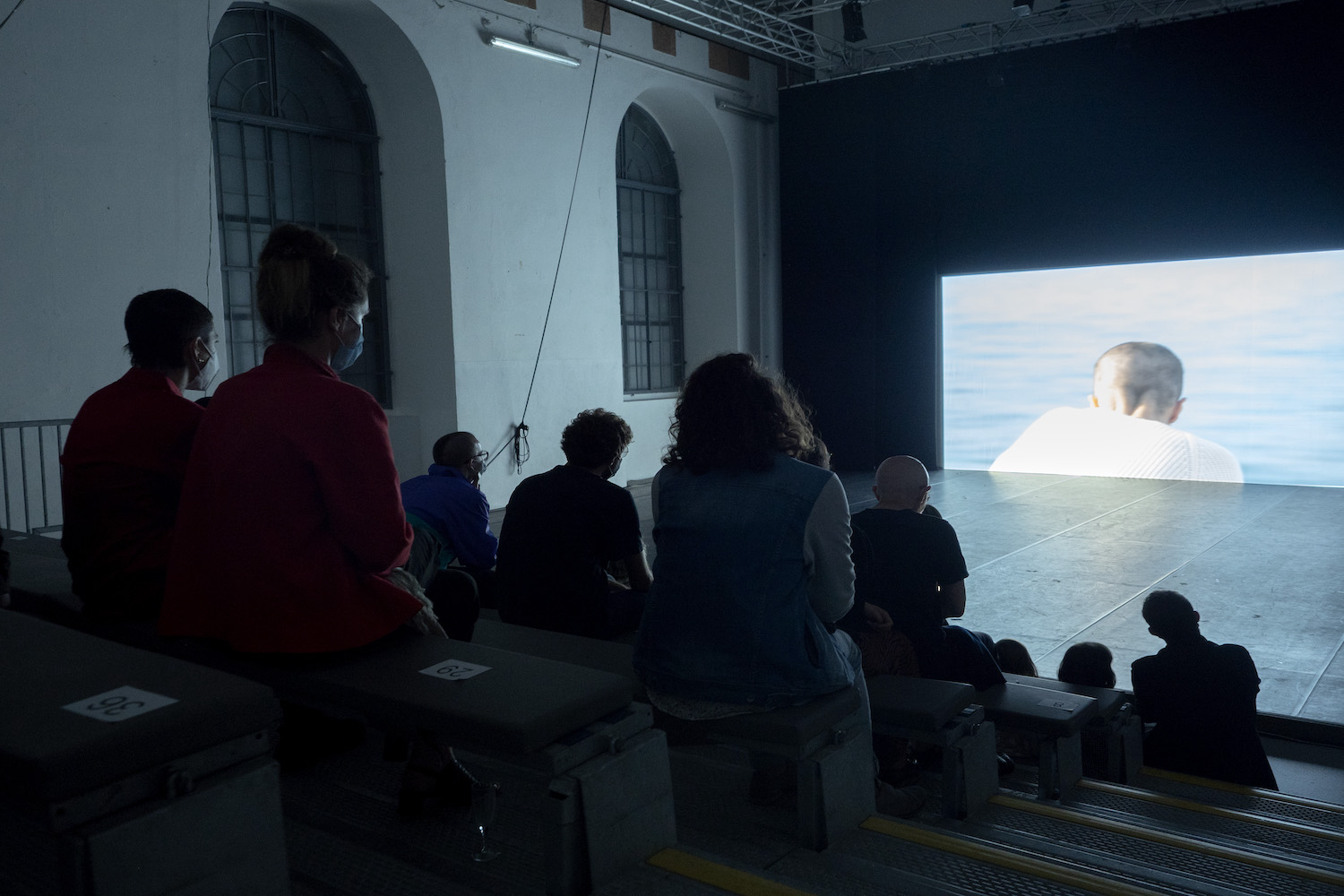 This process of negation has a lot to do with un/doing orientations in defining a purpose or result. In fact, Bycroft’s compass when creating is purposely “fouled” (to use Adrienne Rich’s term, which the artist borrows) when navigating seas and references, creating a dense net of deviant and fragmented associations and meanings. Nobody expects to put the fragments together though, and Bycroft is aware of it. The recent short film Fouled Compass (2020), taking its name from Rich’s 1973 poem “Diving the Wreck,” focuses on Bycroft’s current and long-term research on floating, explored as a methodology of disorientation and a practice of pleasure, while engaging with the literary form of elegy. Planktonic etymologies and homophonic usages come back in this work to discuss drifting as a way of reading, writing, and voicing the world. The (dis)orientation is embodied in “the ‘more than one’ of the encounter,” as Sara Ahmed writes on Orientations, Towards as a queer phenomenology. Near objects, positions, and gazes attach to it, such that words, homophones, and languages constantly lose their referent, becoming magnetized and distracted and returning back to a question of perspective.

Bycroft’s currents carry the (scripted? improvised?) words away, but if you happen to pass by a cave, you might hear an echo too. Floating is also another way to talk about gravity, or about what’s keeping something suspended.

In fact, to allow oneself to float is not only a modality of thinking and (en)acting, but is to create meeting points of agency and affect, a place where the body (of water) touches another body, the sea (which is touched in turn, as Hypatia Vourloumis comments on the relationship between consensual touching and writing). Bycroft’s interest in touch holds up: thanks to quantum physics, the impossibility of touch is transformed into a (virtual) constant, a negative space through which the artist goes on exploring. Floating is another way of touching.

The theatrical devices and sets where most of Bycroft’s films and performances take place reveal an unfolding world of unapologetic desire and wit — a place where most of us would rather live. How does pleasure arise from multiple moments of merging, allowing changes of direction, language, and sonic qualities? Bycroft’s relationship with theater is multifaceted: classical theatrical devices and excessive acting blend with everyday performativity. Bodies linger in windy Mediterranean landscapes and, despite their soft edges, often fall, slide down, laugh hysterically, or dive into watery surfaces. Meanwhile deadpan humor is employed to maintain an expressionless motion. Pop/baroque costumes, plastic ornaments, sculptural brass instruments fixed in cement: the actors activate the set, where long breathing exercises, whistle and gravity, are required to confront the overt discomfort. 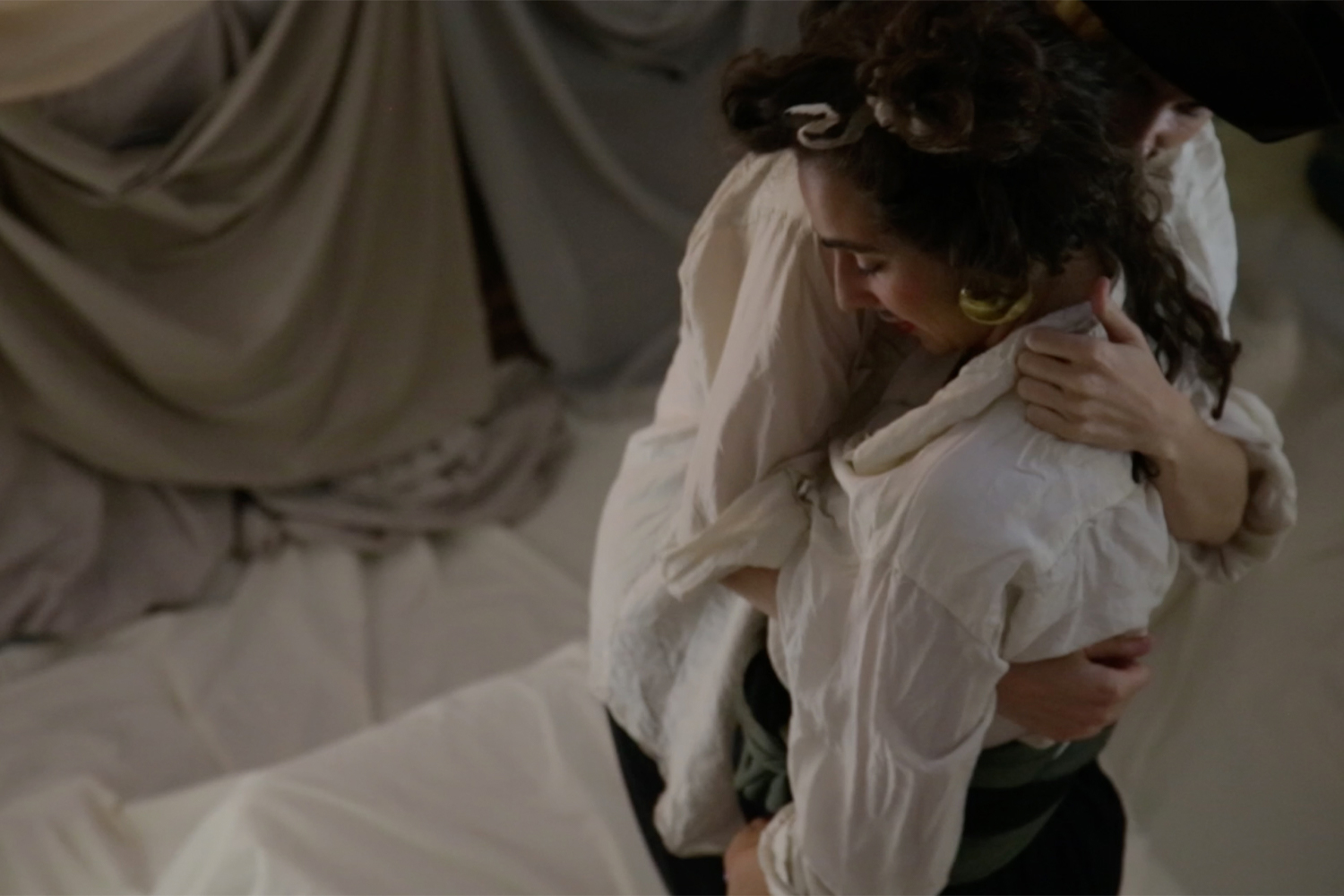 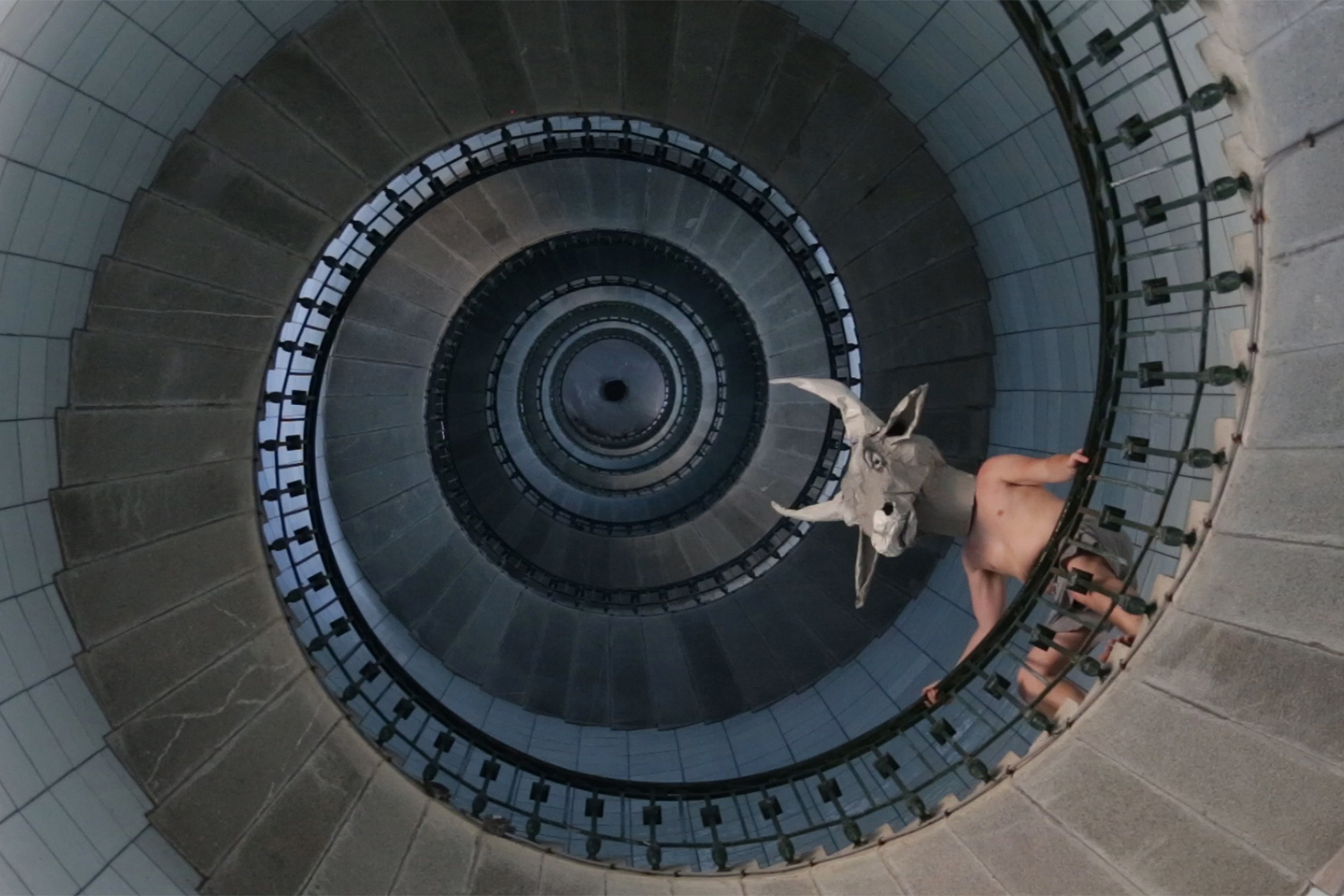 When confronted with the work a few times, one notices the return of certain characters and stories. Bycroft maintains long-term relationships, for example with the twelfth-century trobairitz Beatriz de Dia, whose Occitan-language poem “Chantar m’er de so qu’ieu non volria” (I will sing of that which I wouldn’t have wanted to) is the only surviving canso by a female troubadour. Bycroft echoes forgotten voices in different moments; by adapting them in new contexts the artist creates a plurivocal chorus of histories. They all come (back) and go: writers (Virginia Woolf, Hélène Cixous), comedians (Buster Keaton), pop singers (Britney Spears), and friends of the artist are indistinguishable. There is no autonomy to be found in their authorship. Every work signifies the artist’s invitation to a Dionysian symposium-like theater set of abundance, both linguistic and visual, where, orchestrated in a — seductive — moment of hysterical laughs, they offer medieval aesthetics, roman frescos, and ancient Greek women’s festivals. In this setting, the awkwardness and space for self-sarcasm and improvisation that Bycroft welcomes in the process allows the actors/friends to be clumsy as they refuse acceleration and orientation, developing a resistance based on dissonance, extravagance, and oddness.

Voice and speech has a crucial position in these (unfinished) transformations of script, text, and eventual performance. Bycroft’s research (and dissertation) on “middle voice” is another (earlier perhaps) element of disorientation. No\/\/Here: A Middling in the Course of the River (2016) reflects on a voice that is “neither active nor passive or both, or something else altogether,” and at the same time “expresses reflexive and reciprocal action.”2 Later we meet one more side of Bycroft’s sea narrative exploration: the film ʤɒli rəʊʤər ænd frɛndz (Jolly Roger & Friends, 2019), which “is about not being about”3 two leading figures, the women pirates Anne Bonny and Mary Read from the eighteenth century. The film uses the beloved literal and thematic homophone “drag,” the international phonetic alphabet, masks, and doubling through marionettes and aping, to further investigate the politics of revelation as well as the role of ornament in these narratives. 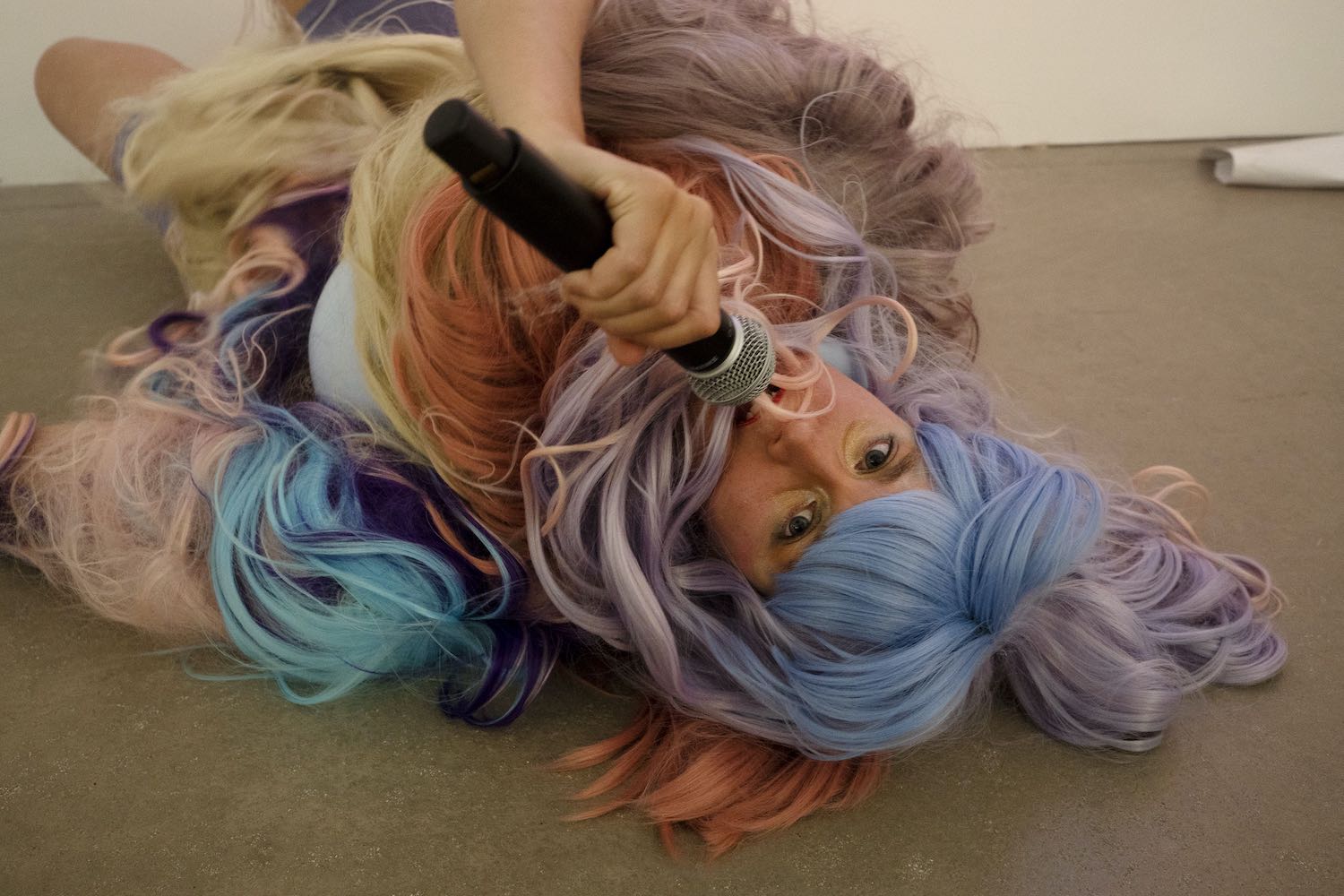 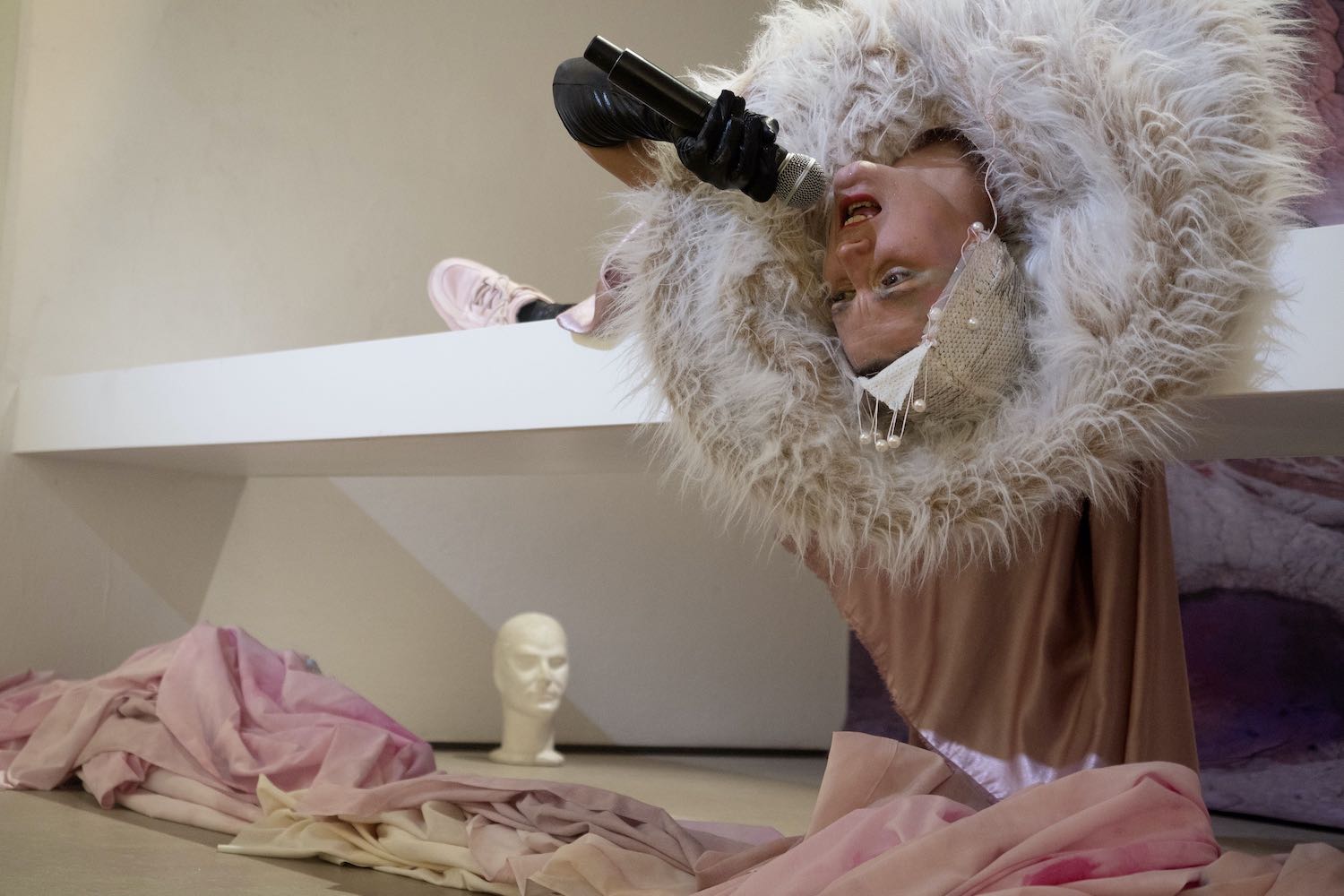 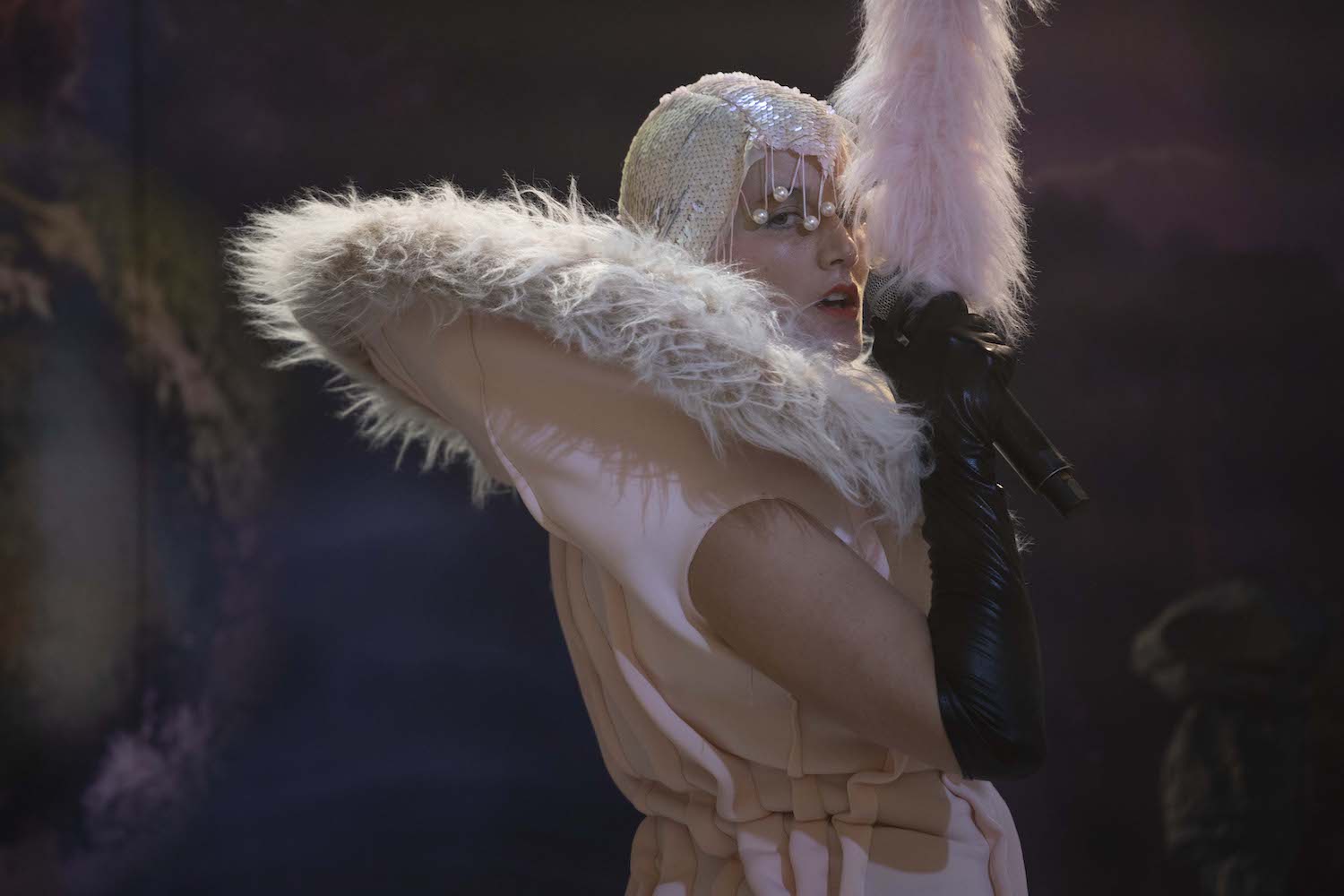 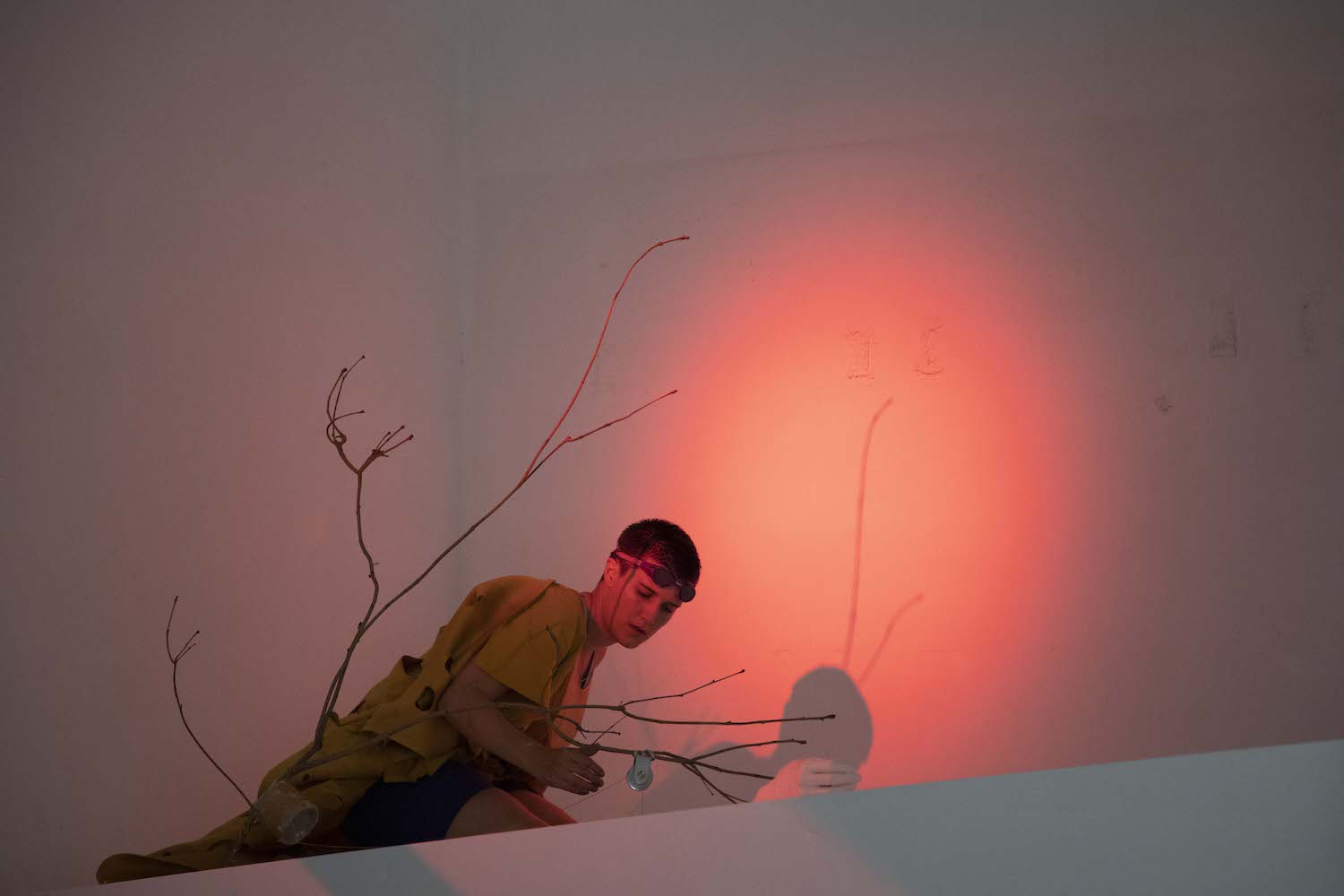 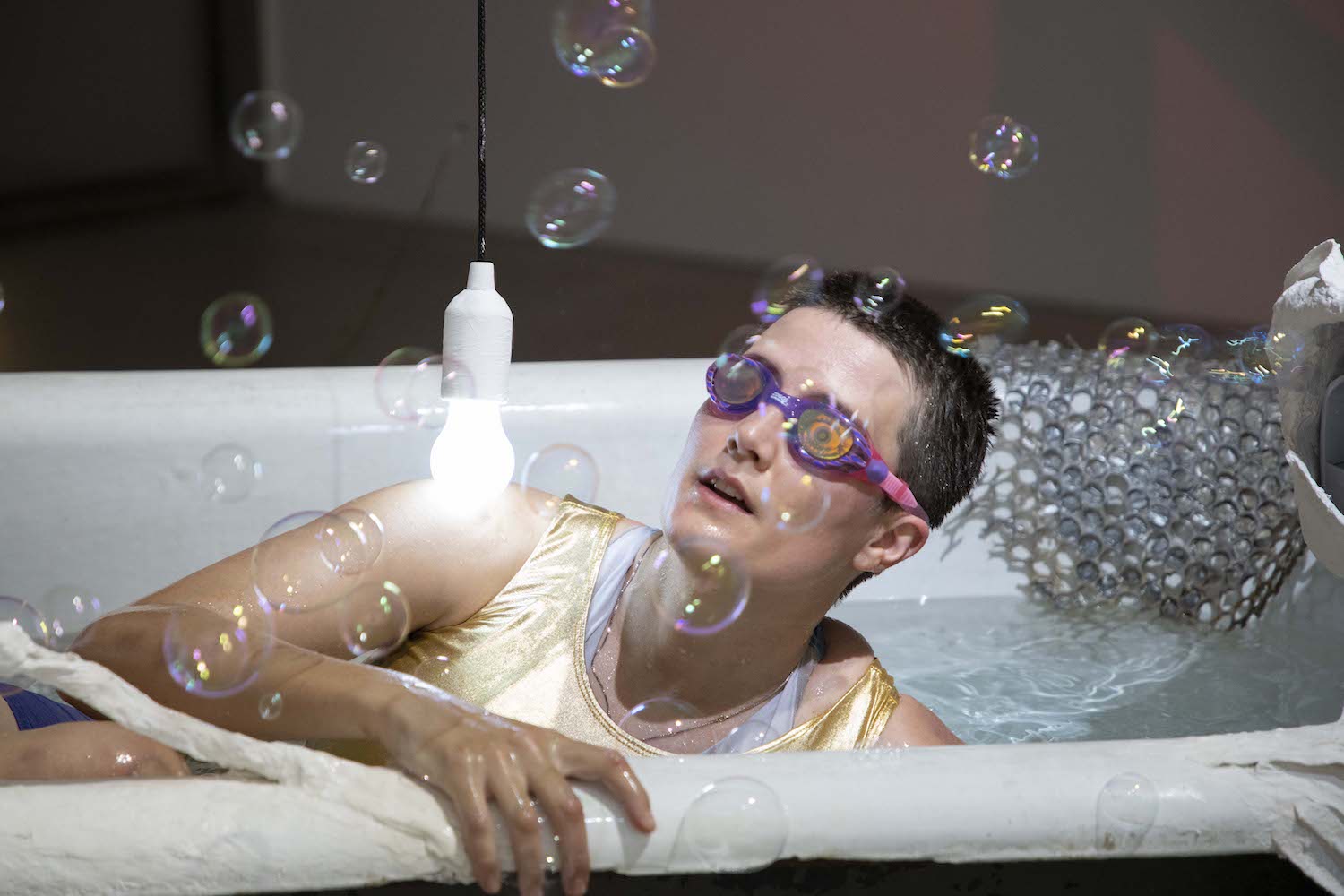 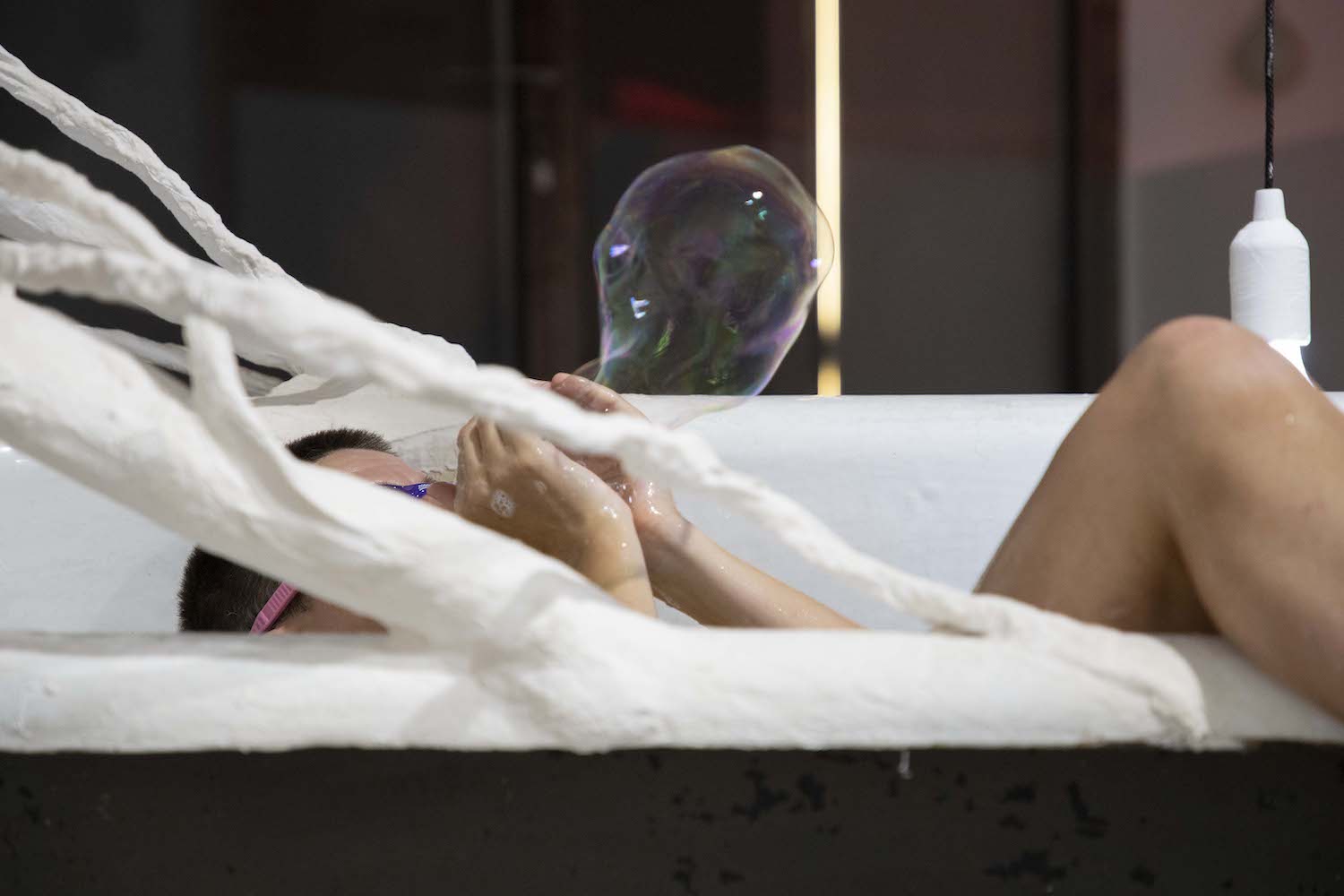 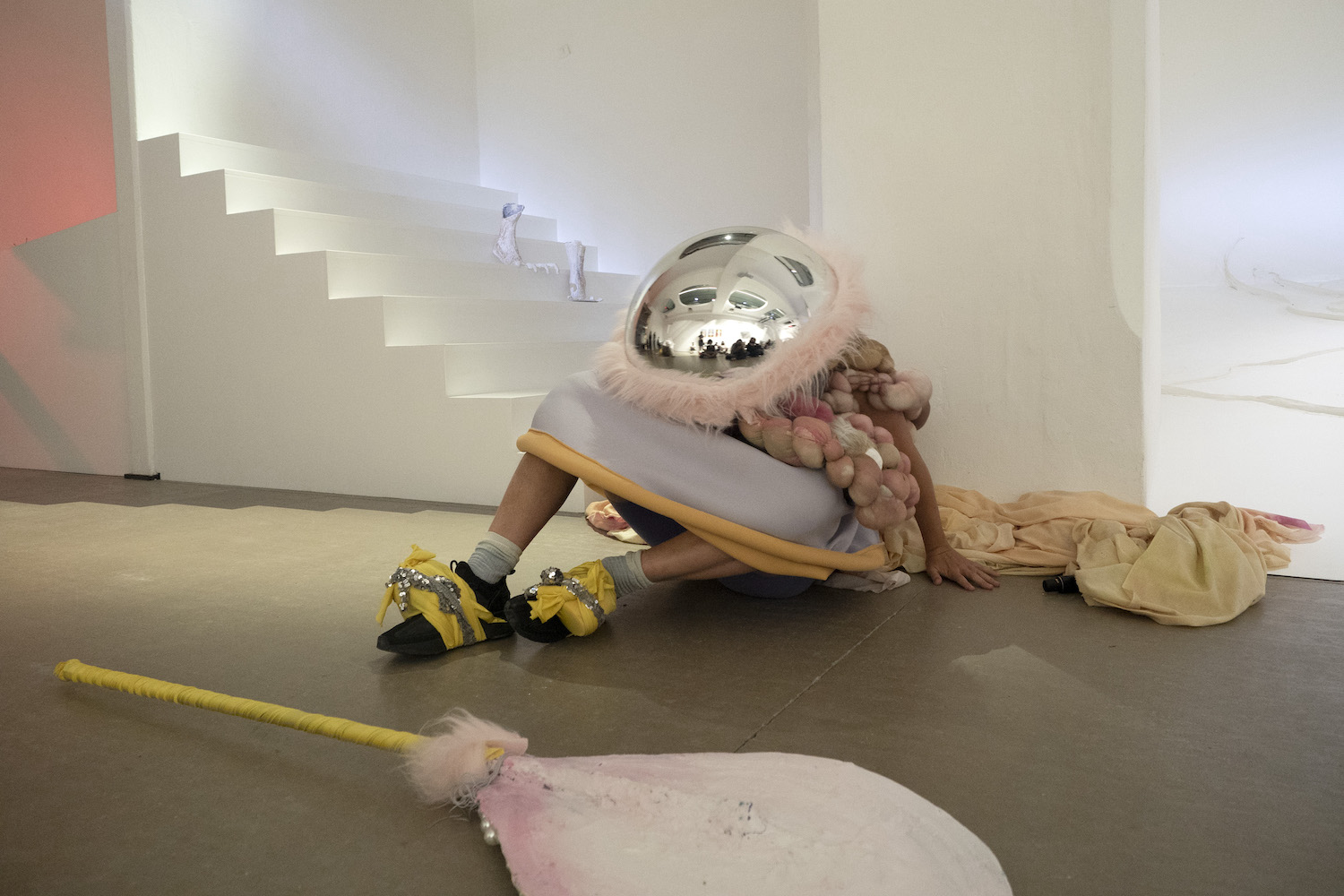 Anna Carson reports on Aristotle’s position regarding the high-pitched voice as evidence of an evil disposition, situating this particular kind of “disturbing sound,” according to the rules of the ancient Greek polis, as something not to be found in a civilized society. The “madness, witchery and bestiality”4 of these high-pitched voices were commonly associated with women, eunuchs, catamites, and androgynes at the time, writes Carson. The noise and erratic climax that Bycroft’s (video) performances bring into the space could therefore be another version of the ancient Ololyga5 — a particular kind of shriek or piercing cry uttered in certain climatic scenes6 of pleasure or pain.

The disturbing mouth is therefore viewed as a door that should remain closed, not allowing inappropriate sounds and words to come out. “The Uncommitted Barnacle” (2021) — the artist’s first solo show in Italy, curated by Barbara Boninsegna and Simone Frangi, now on view in Centrale Fies — starts from this premise: the artist’s research on the plurality of voice traced in literature and écriture féminine.

Inspired by the six (plus one) characters inhabiting Virginia Woolf’s The Waves (1931), the installation and performances take the form of a site-specific installation in which six designated alcoves of the space transform into a larynx. The architectural structures designed by the artist aim to create obstacles but also to serve as precarious stages and theatrical devices, reflecting the gestures of floating and drifting within the museum itself.

Each performance, or fragment of it, is a soliloquy with a constantly shifting locus in which different voices from across centuries and dialects are brought forth and mingled. The installations are activated through a series of characters performing themselves and each other, often making them hard to distinguish and define. The voices deviate, step to the side, are forced to sing and make bubbles, taking advantage of any surface, form, or lack of it.

Wind, waves, caves, and other familiar aspects of these landscapes shift in a pop interpretation by The Side Guy, Back, Doug, Front One, Above-it, and AWOL.

Their fragmented characters, the many Madisons7, the negative identities, may or may not be woven together and given order, indexed to references and associations. But, as long as they float, it will be hard to swim against their intuition.

5 According to Carson’s etymological research, the word and its relatives do not have much significance other than the sound itself.