Maurizio Cattelan: Ciao, Seth. So I thought of doing something different. Maybe you know that the magazine sometimes has readers give interview questions for an artist… So, I have some questions for you, but they’re not my questions.

Seth Price: I figured you wouldn’t do this straight. I was thinking you’d have me write the questions, or copy another interview, something like that.

MC: Aha, yes. Well, this is a bit different. Some people have said my work is political. I never understand that! So, I have some political questions for you.

SP: Political questions? This is from readers?

MC: No, this isn’t from Flash Art. Actually these are not really questions. Maybe they are not political, either. But I was thinking: you are American, the magazine is European…

MC: So, we start. “In Milan, Raymond Aron has just proposed ‘the end of the Ideological Age.’ One wonders if Mr. Aron has the good graces of time on his side.”

SP: That’s interesting. Well, anyone on the other side of the Iron Curtain wouldn’t have agreed. Even in Western Europe in the ’50s… The thing is, he’s speaking in the context of Social Democracy, which is a very complacent system. The Social Democrats that took over by the ’60s, that was something very appealing to older people, the generation that grew up in the ’30s and the war. They wanted economic security, they turned their backs on political mobilization, but I’m not sure that was the case with the younger generation. All they knew at that point was peace, political stability, the welfare state. And if that’s all taken for granted… Maybe there was a lot more frustration with the missteps.

SP: Well, for one thing, the postwar decades in Europe seem like this glorious Golden Age, economically, but in terms of the physical history of the European city, it was terrible. Major cities like Frankfurt, Brussels, London completely rebuilt themselves according to some incredibly ill-considered planning programs. So you have the baby boom, plus migrants from the countryside looking for jobs, and everyone gets stuffed in huge projects out on the edge of town. Like the Grands Ensembles in France, or the British tower blocks —

SP: — which are basically slums. There’s no thought to services, no thought to jobs, no leisure, certainly no foresight about the fact that the residents are going to feel completely alienated, that this enters civic life.

MC: Okay, here’s another: “As a child in Milan, I’d watch a Lancia drive by and think how beautiful it was. Later, when I was able to buy one, I realized that style can conceal a very poor chassis.”

SP: So, I’m supposed to just comment on these?

SP: Well, that whole idea of European style, that was a very new notion. Italian cars, Belgian chocolate, French kitchenware. Everything that was fetishized by the Americans, who were exposed to it through Jackie Kennedy. Danish furniture. But that’s not the case if you go one generation back, back to the early ’50s.

MC: I am actually interested in the ’50s. Something about the decade before you’re born. You know Il Conformista?

SP: Yeah. I haven’t read it though. But the ’50s were an amazing time in Europe, culturally. Speaking just about books, there was that one,  The Fall [by Albert Camus], The Tin Drum [by Günter Grass]… Those are some courageous books. Or Lady Chatterly’s Lover [by D.H. Lawrence], which went to court around 1960 or so… When Lawrence is acquitted, it’s basically the beginning of the decline of the moral authority of the British Establishment.

MC: “Israel has tied now her fortunes to those of the West and devil takes the hindmost.”

SP: That one makes me think of Britain too, especially in light of Iraq. In a way, all those relationships come out of that time… Britain and Israel kind of figured out their relationship to the US during the Suez crisis.

SP: With Britain it was basically the end of any left-over imperial ambitions they had. They were just nakedly beholden to Washington. Anthony Eden resigned over it. I think Eisenhower even threatened to undermine the pound, which must have been mortifying. And Israel completely aligned itself with Washington, from then on. For them it must have seemed pretty clear: if you want to deceive the international community and invade neighboring countries on the sly, you don’t want French or British backing, what you want is American backing. That’s all been borne out to their satisfaction, obviously.

MC: Okay… “The Sixties was indeed ‘The Revolution of the Intellectuals’.”

SP: Well, I don’t know. No year on that? The Sixties certainly weren’t anything like 1848. I don’t know what a Revolution of Intellectuals would be. I guess it’s a looser interpretation. I’d say the Civil Rights movement was revolutionary, in the US… It really depends on who it’s talking about. ’68 is also the year the tanks rolled into Czechoslovakia. But do they mean Eastern Europeans, somebody like Leszek Kolakowski? Probably not.

MC: “Croissants with a Side Order of Mao: What’s Eating European Students?”

SP: I think in the context of — you had the demographic bulge after the War, just huge numbers of young people all of a sudden. But at the same time, most of the universities had just recently changed their admissions policies to admit absolutely everyone. A university might have 60,000 students. The system just couldn’t take it. That was especially true in Italy.

MC: Yes, this I remember, the crowding. There was also sex. Well, people talking about sex.

SP: Although the ‘Swinging Sixties’ is probably tame if you compare it to the ’20s, or the fin de siècle. But, back to your quotation: the fascination with Mao, that was actually less pronounced in France than it was in Italy. So, instead of “croissants”—

MC: Sorry to interrupt, this is amazing: “Our parents expressed themselves through hats; we do it through hair, man.”

SP: You do see those Tarsia photos, the Italian demonstrators in Kossuth caps and Lenin caps. And mustaches. The whole proletarian look. I guess I think of ‘hair-consciousness’ as more American, maybe coming out of hippy culture. For some reason, with Europeans I always think more of the Carnaby Street look. Street Fighting Man. I guess that’s British.

SP: Yeah. Which is also pretty coded. The Rolling Stones were from middle class London, and The Beatles came from working class Liverpool, and it led to these very different marketing strategies… “Liverpudlians!” …Sorry. They kind of went in opposite directions, in terms of their image… What’s it called, inverse proportionality?

MC: So, this is politics.

SP: Yeah, but don’t dismiss the frivolous side of the Sixties. All those cultural changes were a way the new generation could make a real break with these older men who were still running things. Adenauer, De Gaulle, Macmillan, even Khrushchev, these were men born in the nineteenth century.

SP: I don’t understand you literally, but it sounds like a bunch of Leftist groups. Is it from the ’70s?

SP: All those groups… It sounds like a lullaby. You can tell, maybe even from the names — well, in Italy you had a much more serious alliance between students and labor. In France, everything coming out of Nanterre got the attention, but there were also awful labor relations there. And not just Renault factories, places like the ORTF [Office de Radiodiffusion-Télévision Française]. All over Europe. Maybe not Scandinavia, but pretty much every other country. But just compare the Red Brigades with, say, the Red Army Faction. There’s so much more identification with the worker.

MC: “What just occurred in Helsinki?/You’d think that the Reds were too stinky/But now that they’ve signed/You will see in time/The bear will become rinky-dinky.”

SP: Huh. Well, the Soviets did seem to benefit from the Helsinki Accords at the time.

SP: They did benefit, everyone did. But Helsinki laid the groundwork for the Eastern European dissident groups, Solidarno∂Ê, everything like that. Because, yes, it did mean a general Western acceptance of Potsdam, the borders, the Soviet satellites, but it also had this clause no one paid attention to — I mean, they saw it as window dressing — which was a kind of generic affirmation of human rights: freedom of religion, freedom of thought, etc. And Brezhnev commits to this in 1975. Cynically, maybe, but it was also just part of the package. I imagine he regretted it later on, when all these dissidents were holding up this document the whole world watched him sign.

SP: Moving on ahead…

SP: Okay. So, in the mid-’80s British markets totally deregulated, the [Friedrich] Hayek people took over. They called it “The Big Bang.” Thatcher’s whole platform was basically “privatize, privatize.” Although I think all of Europe was privatizing. Mitterand might have come in on some socialist nationalizing program, but within a year or something he did a complete U-turn and he had to give back everything he’d taken! The irony, anyway, is that the state got bigger than ever, in most of Europe. Certainly under Thatcher.

MC: True. This is all coming right out of Postwar.

SP: Well, in the 1990s, certain aspects of the EU started to resemble the US, particularly the phenomenon of a kind of neglected underclass growing in the midst of unprecedented wealth. You really start to see the era of the social welfare state drawing to a close. It’s a pessimism that starts to become more widespread. It’s definitely there in your quotation. The whole notion of Europe, or at least a European Union, may itself prove to be quite short-lived, especially if the ultranationalist right keeps growing. I mean, at one point the Freedom Party was the leading party in Austria for people under thirty. And the Front National often does best in districts that were at one point completely Communist. Which has a kind of grotesque logic. And, you know, if Turkey’s shut out…

SP: Gloom. That’s funny, I was actually thinking about your piece with the squirrel that commits suicide, in that little European kitchen. One thing is that by the ’70s, places like Italy had a much, much lower suicide rate than richer countries like Denmark, Austria, Finland. Who knows why?

Seth Price was born in East Jerusalem, Palestine, in 1973. He lives and works in New York.

Jan Tumlir: Hearing about your background and your childhood experiences with your grandfather, who was a well-known local psychoanalyst, and…

Ai Weiwei, the most prominent Chinese artist-architect in China, grew up in exile, in the remote desert area of Xinjiang.…

From Flash Art International No. 90-91 June-July 1979 I  never used to think too much about Gordon’s work. I used… 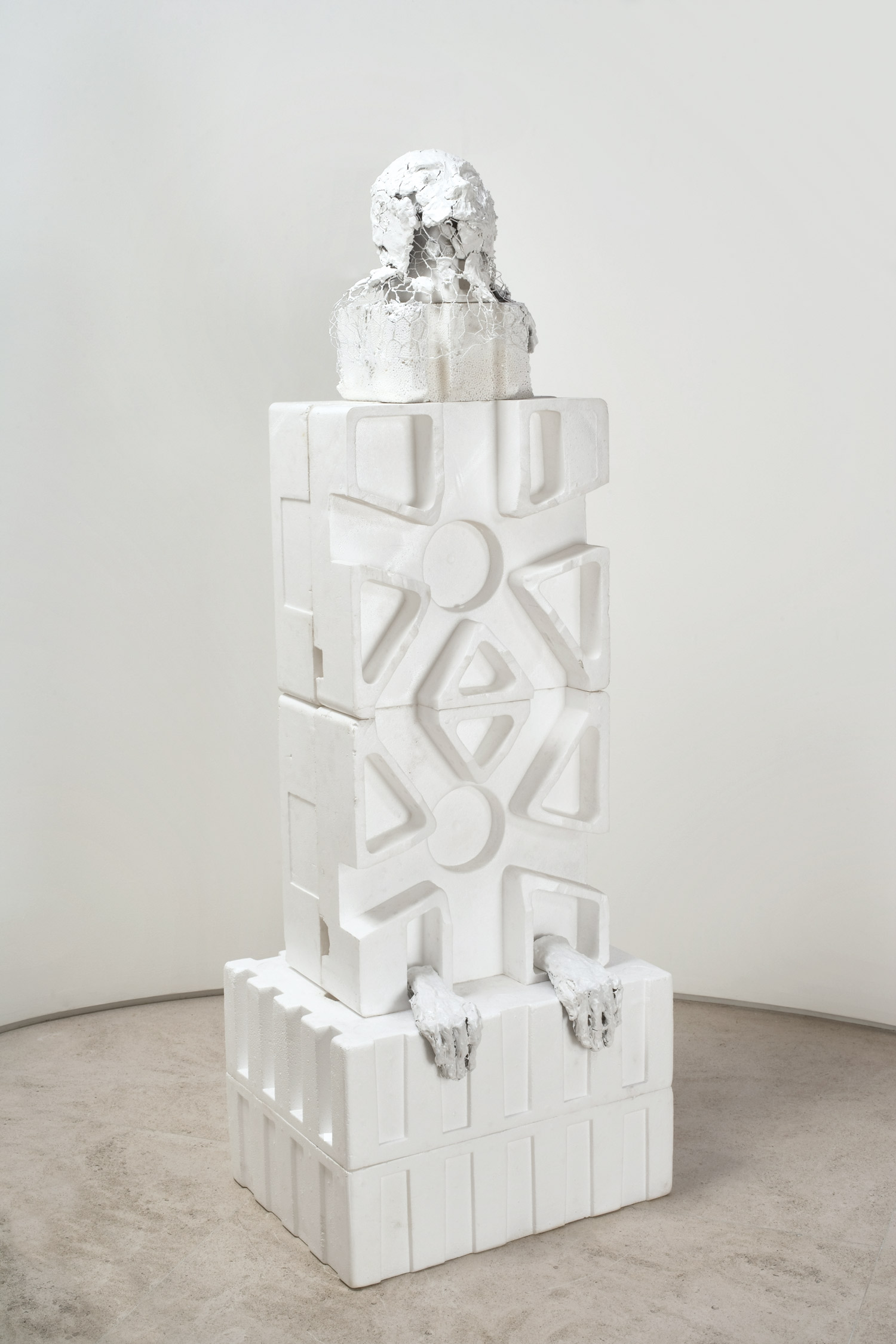 I think Jesus would be horrified at what’s going on,” Huma Bhabha quipped in front of J.C., her rendition of…